skip to main content
Return to Fordham University
You are at:Home»Fordham Magazine»On a Cool Spring Evening, Fordham Alumni ‘Meet the Mets’
Story by Joe DeLessio | Photos courtesy of Kathryn Mandalakis and Taylor Palmer
The night before a recent Fordham alumni outing at Citi Field, the New York Mets made history, with five pitchers combining to throw the second no-hitter in the franchise’s 60 years. And though a repeat performance against the Philadelphia Phillies would be unlikely, fans on this Saturday night arrived at the ballpark feeling good about their team, which entered the game atop the National League East standings. 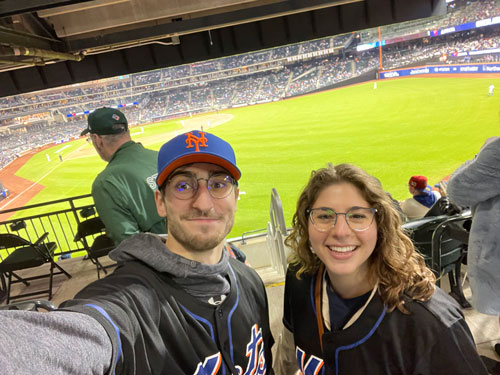 As first pitch approached, fans settled into the centerfield sections next to the iconic home-run apple, many wearing Fordham caps and more than a few wearing Fordham sweatshirts to stay warm on a breezy Queens night. More than 100 people joined the Fordham contingent, using up every ticket allotted to the group.

“Citi Field’s probably the best place to see a baseball game in the country, as far as I’m concerned,” said John Sebesta, FCRH ’90, who was attending the game with a group that included his son, Aidan Sebesta, FCRH ’21, GSAS ’22. “It’s a very nice stadium and a very cozy place to see a baseball game. And it’s the Mets.” (Though as Aidan added, despite the team’s hot start, “You gotta be careful with the Mets. You can’t get too excited.”)

Sophia Zehler, FCRH ’21, a Mets fan living in Philadelphia while pursuing a master’s degree at the University of Pennsylvania, jumped at the chance to see her favorite team in her hometown. She attended the game with Jasmine Ali, FCRH ’20, her junior-year roommate.

“I’ve been a Mets fan since I was a child, and I wanted to come with my best Fordham friends, and they all like the Yankees,” Zehler said. “But she was the good sport that was willing to come.”

Added Ali, who wore the black David Wright jersey distributed to everyone in the Fordham group: “I’m a Yankees fan, but I can be a New York fan for tonight.” 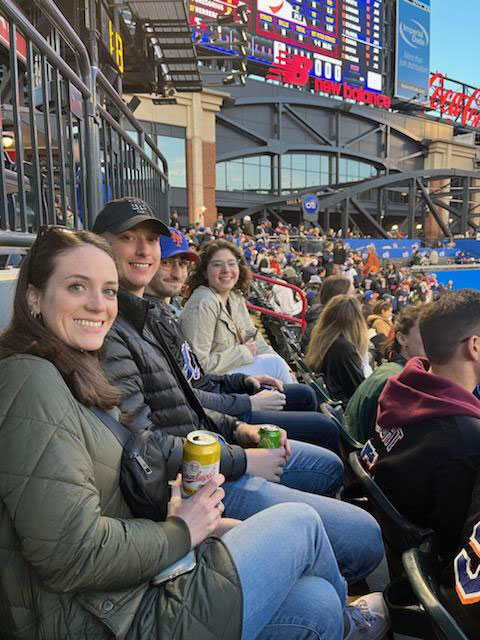 Those who attended the April 30 game were treated to a pitcher’s duel early, with the Mets clinging to a 1-0 lead through six innings. But in the seventh, the Phillies jumped ahead on a Kyle Schwarber home run that landed right in Section 140, where many alumni in the Fordham group were sitting. The Phillies would go on to win 4-1, and on a night when the Mets mustered just four hits, the home fans didn’t have a lot to cheer, other than perhaps the wave that started in Section 142, another with members of the Fordham group.

But on this night, the game’s result was secondary to reconnecting with former classmates.

“I think people love baseball, and people like to really gather in large groups, and they really haven’t had the chance to do that with the pandemic,” said Michael Bennis, GABELLI ’17, ’18, the special events chair of the Young Alumni Committee who helped plan the event. “This is a great way for alumni to bring a bunch of friends, see a good game, and pretty much do the thing we weren’t able to do for like two years.”

This summer, Fordham alumni will have two more opportunities to take in a New York City sporting event together.

On Saturday afternoon, July 9, Fordham grads will head to Yankee Stadium to see the New York City Football Club in action against the New England Revolution. Learn more and register.

And on September 8, the Fordham University Alumni Association is hosting its 4th Annual Fordham Night at Yankee Stadium, when the Bronx Bombers will take on the Minnesota Twins. The first 1,000 fans who purchase tickets through this offer will receive an exclusive New York Yankees jersey co-branded with the Fordham logo. Learn more and register.