skip to main content
Return to Fordham University
You are at:Home»Fordham Magazine»Alumni News»Off-Broadway Play Tells One Woman’s Story of Survival in Rwanda

This month marks the 25th anniversary of the start of the 1994 genocide against the Tutsi in Rwanda. In just 100 days, government and Hutu militia forces systematically massacred an estimated 1 million people, most of them members of the country’s Tutsi minority.

In commemoration of the tragedy, the Magis Theatre Company is staging an off-Broadway production of Miracle in Rwanda, a play that tells one woman’s story of survival.

The one-woman show is based on Left to Tell: Discovering God Amidst the Rwanda Holocaust, Immaculée Ilibagiza’s 2006 memoir in which she describes how she survived the genocide by hiding in a three-by-four-foot bathroom with six other women. Leslie Lewis created the play with Edward Vilga nearly a decade ago, and she has performed it around the world since then.

This new production marks the first time another actress has taken on the one-woman show. Rwandan native Malaika Uwamahoro, FCLC ’17, plays Ilibagiza and about 10 other characters, including the other women in hiding, the Hutu pastor who protected them, and the machete-wielding killer who tried to find them. (Uwmahoro’s understudy is Nisarah Lewis, FCLC ’15, a fellow Fordham Theatre program alumna.)

The show’s director, George Drance, S.J., an artist in residence at Fordham and the artistic director of the Magis Theatre Company, had worked with Uwamahoro at Fordham and suggested her for the role. 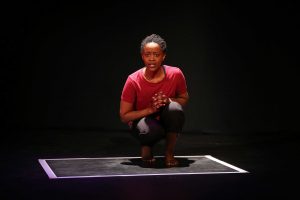 “When Leslie told me that she would be passing on the role to someone else, Malaika was the first person who came to mind,” he told Rwanda’s New Times. “She was always a strong performer in her work at Fordham. I knew she had the strength, the dedication, and more than anything else, the soul to tell the story of Immaculée.”

Uwamahoro was familiar with Ilibagiza’s book before she took on the role. “Being a Rwandan, you hear stories of survival all the time,” she told WFUV’s Robin Shannon on a recent episode of Fordham Conversations. In fact, Uwamahoro’s own grandmother fled to Uganda from her native Rwanda in 1959 to escape the growing persecution of the Tutsi people by the Hutu at that time. But Ilibagiza’s experience was unique, she felt.

“She was there, she had fear all around her, but she was ‘safe,’” because she was hidden, Uwamahoro explained. Instead of running for safety, she was stuck in a small and silent space, “hearing horror and smelling horror.”

Uwamahoro was also taken by Ilibagiza’s message of moving forward with compassion. “So it is a story about survival, but it’s also an incredible story about forgiveness.”

Rehearsing and performing the piece led Uwamahoro to contemplate how much of history is shaped by individual choices. “What it’s shown me is that these things are not that foreign. These things are very accessible. If I wanted to, if I put my energy to being a killer, I could become one. It’s not so far, it’s not so foreign. And if I wanted to have integrity and save people from harm, like the pastor did, that’s not so far from me either,” she told Shannon. “So what I’m recognizing is that these are conscious choices that people make.”

Father Drance was especially inspired by Ilibagiza’s views on the rosary, “which was really the instrument that helped her get through, survive, keep going, keep hopeful,” he told Shannon, “even though everything around her was everything but.”

He believes the play’s message is universal. “It’s a story of courage, of forgiveness, of hope,” he said. “It’s really a story that is transformative. And I look at the world right now, and I said if there’s one thing we’re in need of, it’s a little transformation.”

Miracle in Rwanda opened on April 4 and is scheduled to run until May 11 at the Lion Theatre.