skip to main content
Return to Fordham University
You are at:Home»Fordham Magazine»Books»Nonfiction Books in Brief

America, as Seen on TV: How Television Shapes Immigrant Expectations Around the Globe by Clara Rodríguez, Ph.D., professor of sociology at Fordham (New York University Press)

In her latest book, Clara Rodríguez examines the “soft power” of American television in projecting U.S.-centric views around the globe. She analyzes the strong influence TV exercises on both young Americans and recent immigrants with regard to consumer behavior and their views on race, class, ethnicity, and gender.

The book is based on two studies: one focused on 71 immigrant adults over 18 who had watched U.S. TV in their home country, and one focused on 171 U.S.-born undergraduates from the Northeast. Many in the foreign-born group were surprised to find that their experience of the U.S. proved more racially and economically diverse than the mostly white, middle-class depictions of American life that they had seen back home on TV. And substantial majorities of both groups shared the sense that American TV is flawed in that it “does not accurately represent or reflect racial and ethnic relations in the United States.”

Still, Rodríguez notes, TV is “a medium in flux; it has changed greatly in the past decade, and the only thing we can be certain about is that it will continue to change.” 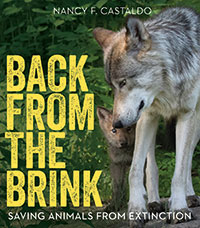 Back from the Brink: Saving Animals from Extinction by Nancy F. Castaldo, MC ’84 (Cornell University Press)

“All of these animal populations plummeted,” she writes, “and yet, all of them survive today.”

She describes how each species got in trouble; relates the often controversial restoration efforts and their results; explains the need for apex predators; offers calls to action for young readers; and pays tribute to a group of “eco-heroes” (including President Richard Nixon, who in 1973 signed the Endangered Species Act) who “look out for the needs of creatures that cohabit this planet, even when these needs may conflict with our short-term economic goals.”

From failed promises of women “having it all” to the contemporary struggle for equal wages for equal work, Kirsten Swinth exposes how government policies often undermined tenets of second-wave feminism during the 1960s and 1970s.

She argues that second-wave feminists did not fail to deliver on their promises; rather, a conformist society pushed back against far-reaching changes sought by these activists.

“My focus is on the story of a broad feminist vision that wasn’t fully realized,” Swinth notes. “There were a lot of gains generally, but the movement also generated an antifeminist backlash so that most of the aspirations, like a sane and sustainable balance for work and family, were defeated.”

She examines activists’ campaigns and draws from them “a set of lessons that we need to inspire us” to continue the fight “with a new energy.” 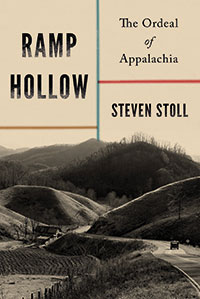 Ramp Hollow: The Ordeal of Appalachia by Steven Stoll, Ph.D., professor of history at Fordham (Hill and Wang)

To better understand the history of the United States, one should include the people who were displaced from lands they once called home, argues Steven Stoll. That story includes not only Native American tribes evicted by English and later American settlers but also poor whites who once called the mountains of Appalachia home.

In Ramp Hollow, he visits an area just outside of Morgantown, West Virginia, to explore how the people who once lived there were pushed out and forced to surrender a self-sustaining, agrarian life in exchange for a wage-based living tied to coal mining companies and lumber mills. 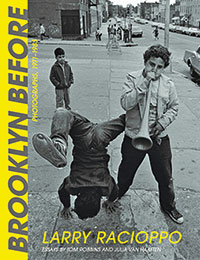 New York City photographer Larry Racioppo honed his art and craft during the 1970s by taking pictures of family, friends, and kids in his working-class South Brooklyn neighborhood.

This collection of his early work highlights families—most of them Italian American, Irish American, and Puerto Rican—as they go about their daily lives, celebrating Catholic sacraments and holidays, playing stickball and congas on the sidewalk, hanging out on stoops and fire escapes, posing with boom boxes in front of graffiti-tagged walls, and taking part in patriotic parades and religious processions.

“I did not know it at the time, but I was recording a part of Brooklyn that would soon be remade by gentrification,” Racioppo writes.