skip to main content
Return to Fordham University
You are at:Home»Fordham Magazine»Alumni News»NBA Announcer Mike Breen Inducted into Basketball Hall of Fame
Mike Breen, FCRH ’83 (right), posing with Fordham athletics director Ed Kull at the 2021 Naismith Memorial Basketball Hall of Fame Curt Gowdy Award ceremony. Photos courtesy of Fordham athletics
Mike Breen, FCRH ’83, was inducted into the Naismith Memorial Basketball Hall of Fame and presented with the Curt Gowdy Media Award on May 14. Breen, who is a play-by-play announcer both for MSG Network and ABC/ESPN, accepted the award at an induction ceremony at Mohegan Sun in Uncasville, Connecticut, saying during his speech that “I’ve had this enormous privilege to call so many great moments in NBA history, but the best part, the best part, has always been the lifetime of friendships that the game has given me.” 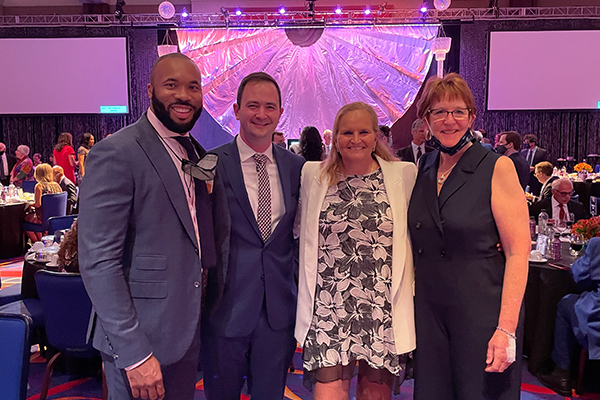 To congratulate Breen on the honor, a number of fellow Fordham and WFUV alumni appeared in a video from Fordham athletics, sending kind words and paying tribute by reciting one of his signature calls: “Bang!”

🎉Congratulations🎉 to Mike Breen FCRH ’83 who will be presented with the @NBA Naismith Hall of Fame Curt Gowdy Award 🏆 tonight.

Many @FordhamNYC greats got together to show their appreciation for all that Mike has done for our community. pic.twitter.com/SMbb9VASeW