skip to main content
Return to Fordham University
You are at:Home»Editor's Picks»My 9/11: A Personal Reflection by General Jack Keane, Former Vice Chief of Staff of the U.S. Army 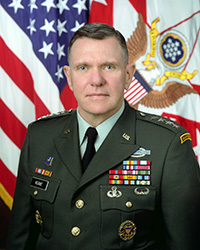 General Jack Keane, a 1966 graduate of Fordham’s Gabelli School of Business, was at the Pentagon on September 11, 2001. Top: The Pentagon Memorial honoring the 184 people killed at the Pentagon and on American Airlines Flight 77 on 9/11.

I was in the Pentagon on 9/11 and lost 85 teammates from the Army Headquarters (among the 125 people killed in the Pentagon and the 59 passengers who died on Flight 77), including a dear friend, Lt. Gen. Timothy J. Maude, a three-star general. My secretary lost five friends she had known for more than 20 years. We sent a general officer to every funeral. Terry, my wife, and I attended scores of funerals. Most were buried in Arlington, all together at a site selected in view of the Pentagon.

On that fateful day, I was in my office when one of my staff rushed in to turn on the TV and advise me something terrible had happened in New York City. I saw that a plane had hit the World Trade Center (WTC). I am a born and raised New Yorker. I noticed it was a blue-sky day and you could not hit the WTC by accident. I knew in 1993 terrorists had tried to bomb the WTC and bring it down from an underground parking garage. I knew instinctively it had to be a terrorist attack and said as much. I ordered the Army Operations Center (AOC) to be brought up to full manning (which was fortuitous because many who occupied it came from the blast area where the plane would eventually hit the Pentagon). The Pentagon is five stories high and five stories below ground level. It houses on a normal day about 25,000 people, most of them civilians. Up until the time the Sears Tower was built in Chicago, it was the largest office building in the U.S. The AOC was on the lowest floor.

We watched the second plane hit the WTC. My operations officer, a two-star general, called me to confirm that the AOC was fully manned. He also advised me that he was monitoring FAA communications. All planes were being grounded, he said, but a plane that took off from Washington, D.C., had turned around in the vicinity of Ohio and approached D.C. from the south along I-95 before turning east, short of the city, and then south again. We know now that the terrorist flying that plane likely believed he was too high. The general and I were discussing procedures for evacuating buildings in D.C. when the plane hit us. My office shook violently and eventually began to fill with smoke. I asked the general if he felt the impact. He said no (he was five stories down under the ground floor). I told him we were just hit and advised him to tell the U.S. Army around the world what happened and that, given the status of the AOC, which was unharmed, we would still maintain command and control of the Army. I told my immediate staff to call home and to evacuate. I kept my executive officer, a colonel, and my aide, a major, with me. I gave them my shirts from my office bathroom, and we soaked them in water and wrapped them around our nose and mouth and headed toward the blast site.

We were about a hundred yards away when the smoke became thicker. People were running from the blast area, and we were ensuring that everyone was getting out. At some point, my executive officer tapped my shoulder and said: “Sir, I think we need to leave this to others and go to the AOC and take command of the Army.” Of course I knew immediately that he was right, and we joined my staff in the AOC. As other officers joined us who were outside the building, we noticed that their shirts were full of blood; some had used their ties as tourniquets to assist the wounded.

We heard the report that five planes inbound to the U.S. were unaccounted for and that fighter aircraft were mustered to engage them. Vice President Cheney had given permission to shoot them down if necessary. I can remember thinking, what must be going through the mind of the pilots knowing they would kill hundreds of innocent people to save thousands. Fortunately, the pilots made visual contact with the airplanes and eventually radio contact, and all five planes were safe. The AOC has very large screens, floor to ceiling, where we monitored activities. The Secretary of the Army was taken by helicopter to our classified alternate site. He did not want to go, but he had no choice.

That night, before I visited the wounded in the hospitals in D.C. and Virginia at about 11 p.m., I told my officers that the Pentagon and the WTC represented the first battle of a new war. “The days of treating terrorists as criminals and bringing them in to the justice system are over. Today’s attack is an act of war, as all terrorist attacks are. The Army will bear the brunt of this fight, and we intend to go find them and we will kill and destroy them by the thousands.” We took one step toward the enemy that night by putting a work plan together to support CENTCOM, who we knew would be in charge of the war. I ordered the 82nd Airborne from Fort Bragg to secure the Pentagon. They were there when people came to work.

We visited five hospitals, seeing all the wounded. The worst had horrific burns. We heard stories of extraordinary heroism. We saw the first responders, many who never left, even though another shift had come on. They told me that because it was the Pentagon, so many of the wounded were initially treated by military people who are trained to treat injuries. In many cases, the bleeding had been stopped, and the wounded were being treated for shock when they arrived. The first responders indicated that lives were saved as a result. Some of the wounded would stay in the hospital for weeks.

The next day, we knew we had a number of people killed because they were unaccounted for. The Army team in the Pentagon showed up for work, on time, mostly civilians. I was so proud of them as I traveled the building to provide reassurance. They knew we were at war and they were a part of something much larger than self. I also knew as I spoke to survivors that many were hurting mentally and emotionally. I ordered the Army surgeon to bring doctors and counselors over to the building to help our folks cope. I also told the Army chief historian to document what took place, it’s part of our history now, and also to record the heroism that took place. When appropriate, I said, we would recognize those involved.

I visited the crash site on 9/12 with the chief engineer, and what I saw was quite remarkable. The upper floors at the plane’s point of entry had collapsed due to the blast and heat from the fire. The Pentagon is actually five independent rings separated by an alley between each ring. The plane entered at the ground floor, knocking down outside lampposts on the approach, and penetrated three of the five rings, with the nose of the aircraft penetrating the inner wall of the third ring. I was looking at what appeared to be a blackened multistory parking garage. I asked, “Where are all the desks, the computers, the walls, the plane?” He said all was consumed in the fire of the jet fuel, likely 2,000-degree heat. He showed me the strut of the plane which held the front tires, and it was in the alley between the third and fourth wing. The whole fuselage had entered the building but nothing was left. I realized that our dead teammates and the remains of the passengers were all around us and had been consumed by the fire.

We ordered the Old Guard, 3rd Infantry from Fort Myer, to the site. They are infantry soldiers. They would come with body bags, and when the fire department recovery teams spotted remains, we asked that all work stop. Everyone on site would stand in place. A four-man team of soldiers would move to the remains and recover them to a tent set up in the parking lot where a chaplain prayed over them with a two-man honor guard at attention. After honors, we turned the remains over to the FBI. They were later returned to us and flown by CH47 helicopter to Dover, Delaware, for identification by their families. We were determined to properly honor our dead as we would on any battlefield.

The engineer indicated that we were standing in the first renovated wedge of the Pentagon, which had not been fully reoccupied as all the new furniture had not arrived. Normally 5,000 people would have been working in that part of the building; at the time the plane hit, however, he estimated that only 2,000 people were there. Moreover, when the building was built during World War II, due to the iron shortage, no rebars were used in the cement beams holding up the floors. As part of the renovation, rebars were inserted. As such, the only part of the Pentagon that had iron rebars in the beams was the area where the plane hit, and that part was less than half occupied. He said the rebars held for 45 minutes, allowing people on the upper floors time to get out. If the plane had hit any other wedge containing approximately 5,000 people, the building would have collapsed immediately, and the casualties would have been on the same scale as the WTC or greater.

A few weeks later, we had the most extraordinary award ceremony I ever participated in. We had to create a new medal for civilians wounded in action because they are not authorized to receive the Purple Heart. The Secretary of the Army and I decorated many people that day for heroism and for their wounds, as they represented everyone who was part of the Army team. They were young and old, men and women, soldiers and civilians, officers and enlisted, black and white. Some were in great physical condition; some were not. It reminded me once again that heroism does not have a gender, a race, a religion, a size, or shape. Anyone willing to give up their life for another, acting instantaneously, has all to do with heart and character. This is about true honor. I was so proud to be among them at the largest and most unique award ceremony of my career.

A few days later, I visited Ground Zero as a senior military leader from New York City representing the Department of Defense. The fire chief in charge of the recovery walked me over the WTC complex of smoldering ruins. It was a macabre and overwhelming experience, as we had all witnessed on TV. I attended the mayor’s evening brief on a pier along the Hudson River. I was impressed; it was as organized as any military operations center. The people were steady, firm, and determined. I offered the mayor the assistance of his military, which had been already offered to him on the phone. As I left, with sirens blasting to take me back to my aircraft, there were hundreds of New Yorkers along the West Side Highway cheering and waving American flags. I was proud of my city, its leaders, and its people. I knew we would never be the same again.

—General Jack Keane, a four-star general, completed more than 37 years of public service in December 2003, culminating in his appointment as acting chief of staff and vice chief of staff of the U.S. Army. General Keane is a 1966 graduate of Fordham’s Gabelli School of Business.