For Tim Kubart, home is where the music is.

After more than a decade performing for kids and grown-ups, the versatile entertainer received a Grammy nomination for his 2015 children’s album, Home.

“Home is about the small moments in life, the ones that matter most,” Kubart, FCLC ’06, says. It’s the third album of children’s music for the energetic singer, who’s played sold-out shows for audiences of all ages. The recognition for Home is appropriate, since performing for kids is exactly where he feels he ought to be. “It’s really what I feel I should be doing. It drives me.”

That revelation came to Kubart during his Fordham days, when he was volunteering at a homeless women’s shelter as part of the Women in Theology class. He asked if he could play a few songs for the children in the nursery.

“It was the best audience I ever had. It was very clear what I wanted to do,” says the 31-year-old Brooklynite, who’s also known for his role as the “Tambourine Guy” in the band Postmodern Jukebox, a viral success on YouTube. 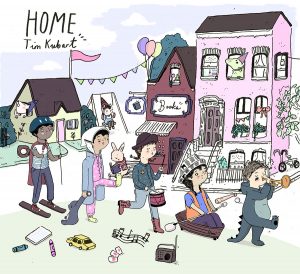 Kubart collaborated on Home with songwriting partner Matt Puckett, FCLC ’09, who played pop music with Kubart in their Fordham days.

“He flew up to New York (from Texas) and we wrote the songs in a few weeks,” Kubart says. “They were written in the voice of a kid but through our own experience.”

The pair also wrote together for Kubart’s other albums, the full-length Anthems for Adventure and Tim and the Space Cadets, an EP titled for the singer and his band. “Now as artists, because we’re getting a little older, we’re thinking about home and the idea of making a home.”

The album’s melodic tunes—like the catchy lead single “The Breakfast Club”—aim to appeal to the whole family.

“We tried to be heavily influenced by all the things going on in pop music, like Taylor Swift, Maroon Five, Beyoncé—what kids are already listening to. But we said, let’s keep the thing that we do, which is celebrating childhood and families,” Kubart says.

When he’s not performing in venues like Brooklyn Bowl, Symphony Space, and Chicago’s Old Town School of Folk, Kubart hosts Sunny Side Up, a live morning show for preschoolers on NBCUniversal’s Sprout Channel. He and his co-host, Chica the Chicken, broadcast from 30 Rockefeller Center weekday mornings for a national audience. Recent guests have included Julie Andrews, William Shatner, and Michelle Obama, who sang a song with Kubart. “She was wonderful,” he says.

A theater major at Fordham, Kubart’s also got some primetime TV and soap opera acting credits under his belt. And he’s performed as the house bass player for NBC’s America’s Got Talent.

But for him, the best audience is the under-12 set and the people who love them.

“I love how honest kids are,” he says. “Kids are not going to be polite and give you what you’re hoping for. They give you what they want to give you in that moment.”

The children’s media he consumed as a boy, he says, played a big part in shaping the person he became. “I want to create media like that for kids. Everything I do, from Sprout to my music to Tambourine Guy—it’s all about kindness and joy.”