skip to main content
Return to Fordham University
You are at:Home»Fordham Magazine»Books»Mortal Blessings 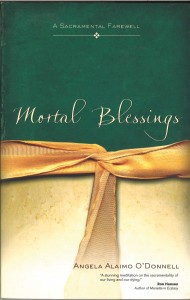 In December 2009, Angela Alaimo O’Donnell’s already-frail mother took a bad fall and broke her hip. Forty-eight days later, she was gone. Mortal Blessings is the story of how the author and her siblings cared for their mother in that short, sacred time span, when mundane acts of caregiving took on divine grace. O’Donnell, associate director of Fordham’s Curran Center for American Catholic Studies, divides this memoir into chapters named for newfound sacraments. There’s “The Sacrament of the Cell Phone and the Wheelchair,” for example, an account of regular calls to family members and daily strolls around the hospital that “served as a kind of communion for us,” writes O’Donnell. “We moved up and down those hallways as one, two parts of a single whole.” Even their ritual of enjoying pie together had become “Eucharist by another name.” And like the Eucharist, O’Donnell writes, her sacramental witness to her mother’s final days “was one more way of affirming life in the face of apparent death.”