skip to main content
Return to Fordham University
You are at:Home»Fordham Magazine»“Missionary for the Arts” Launches Dance Career

“I want to be a missionary for the arts,” says Courtney Celeste Spears. “I want to be that bridge or connection for kids who don’t have the support I did.”

A Baltimore native, Spears is a senior in the Ailey/Fordham BFA program in dance at Lincoln Center. She is also pursuing a minor in communication and media studies.

“I’ve always felt that, as important as dance is as a performing art, it’s also meant to reach people, to communicate something meaningful. I’ve always wanted to be able to share that,” she says.

The ability to combine academics and dance is part of what first attracted Spears to Fordham. She was set on being able to “dance rigorously and also have a rigorous academic schedule,” and felt that most other universities would force her to compromise one or the other. At Fordham, “it’s like they both got amplified.”

“I was also drawn to the Jesuit mentality of outreach and helping others,” she says, “of continuing to love what you do and excel at it while bringing others up with you.” 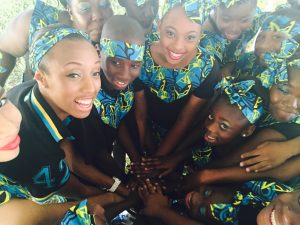 Spears with her young student-dancers as they prepare to perform at a Bahamian independence day celebration.
Photo courtesy of Courtney Spears

Spears has taught dance classes in the Bahamas, her mother’s homeland; completed an internship in Alvin Ailey’s public relations department; and auditioned for professional dance companies. At the end of her junior year, she was invited to become a member of Ailey II, the highly selective junior company of Alvin Ailey American Dance Theater.

Her dedication, passion, and desire to help others have earned her recognition. At Fordham, she is the recipient of the Denise Jefferson Memorial Scholarship. And, this past summer, with the help of the Office for Prestigious Fellowships, she earned a Princess Grace Award for Dance. The award includes a full-tuition scholarship for her senior year.

“It’s still surreal to me,” says Spears. “Financial aid certainly played a huge part when I came to Fordham. I felt a personal responsibility to learn all I could about Denise Jefferson [one of the founders of the Ailey/Fordham BFA Program] when I received the scholarship [named in memory of her]. And I know the Princess Grace Award will not just help me but give me a platform and the connections to reach people, raise awareness, and spread love of and resources for the arts.”

However surreal it may seem to Spears, those who know her are not. “Courtney completely immerses herself into anything she takes on. She understands that being a dancer is greater than the individual. And she brings goodness wherever she goes. I think the Princess Grace Award will allow her to meet artists in other fields and open even more doors for her,” says Tracy Miller, Ailey/Fordham BFA program administrator.

In the fall, Spears will begin her professional dance career as she travels across the country and abroad to Italy with Ailey II.

“I am excited to travel and keep feeding myself artistically so I can keep giving to others. I see dance as a vessel to put good back into the world,” she says.