skip to main content
Return to Fordham University
You are at:Home»Fordham Magazine»MaYaa Boateng: Out of the Comfort Zone
Photo by Michael Falco
If there’s one thing that MaYaa Boateng, FCLC ’13, has learned from acting, it’s how to be fearless. This past spring, the Fordham Theatre alumna starred in Jackie Sibblies Drury’s Fairview, which had its world premiere off-Broadway at Soho Rep (and was later named one of the best plays of 2018 by Time magazine and The New York Times). In the last 15 minutes of the play, Boateng declares “stop.” The other actors on stage halt and drop their characters. Another actor, Hannah Cabell, asks her what’s the matter.

“I can’t think in the face of you telling me who you think I am, with your loud self and your loud eyes and your loud guilt,” she says to Cabell, who is white. “I can’t hear myself think.” She then turns, comes down from the stage, and starts speaking directly to the audience.

It’s a charged moment in the play. And it’s all scripted. What starts out as a sitcom-like family drama becomes an exploration of race and the white gaze. Boateng played Keisha, the youngest member of the Fraser family, who calls out the white audience members for being complicit. “Do I have to keep talking to the white people?” she says, looking to the faces of color in the audience. “Do I have to tell them that I want them to make space for us?”

The monologue was written by Drury, but because Boateng was delivering the lines so frankly every night, she would have to field the audience’s reactions in the moment, from confusion to discomfort to outright anger. She recalls during one performance, when she asked those questions, a white audience member shot back, “Well, why would you want to keep talking to them?” When Boateng didn’t answer him, he said, “Oh, you’re going to keep talking over me. This is a monologue, it’s not a dialogue.” Boateng then went slightly off-script, she says. Without breaking character, she spoke a stern line to the man and continued with her speech.

Her grace under pressure got the attention of artists and critics. In his review for The New York Times, chief theater critic Ben Brantley called the play “dazzling and ruthless,” and wrote, “Ms. Boateng also winds up with the heaviest acting duties, and she executes them with unblinking, confrontational clarity.” 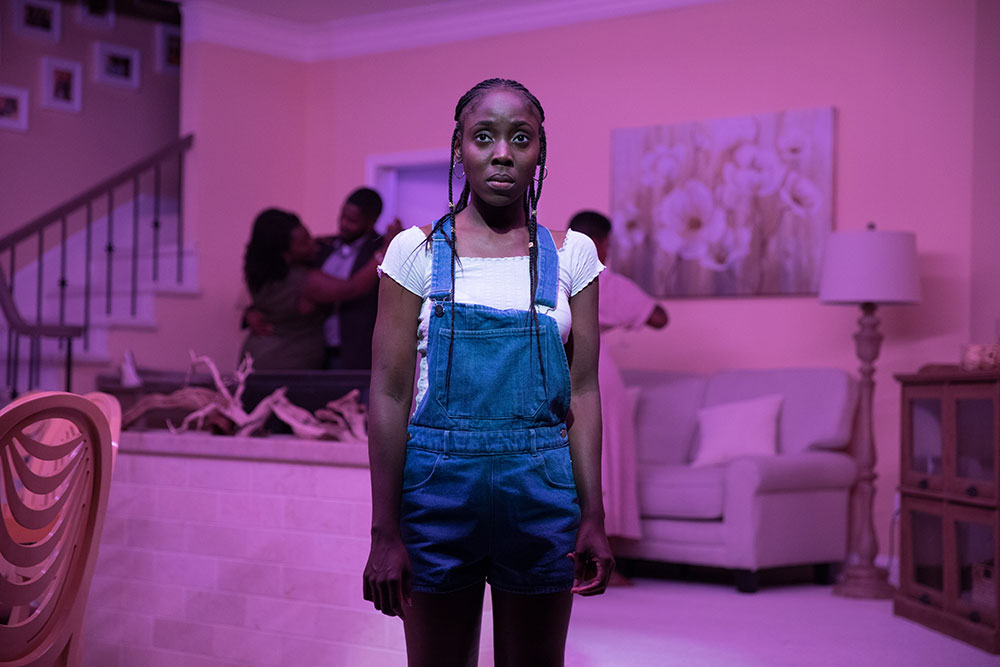 MaYaa Boateng in “Fairview,” one of The New York Times’ and Time magazine’s best plays of 2018. Photo by Julieta Cervantes

The play’s two-month run ended in August, and since then, Boateng has been keeping busy—shooting a recurring role on a Netflix television show in the city (she can’t say much about it until the show’s premiere in 2019) and finding more stage work.

“I’m the person who always gave myself challenges,” she says over coffee one November afternoon in the lobby cafe at the Signature Theatre, where she was in rehearsal for a revival of Pulitzer Prize-winning playwright Lynn Nottage’s Fabulation, or the Re-Education of Undine. (The show runs at the Signature from November 19 to January 6.) Even when she was young, Boateng says, “I would throw myself into the things that scared me.”

It was her bold performance in Fairview that got the attention of Fabulation director, the Obie-winning Lileana Blain-Cruz. “It’s been wonderful working with her,” Blain-Cruz wrote in an email. “She has a joyous spirit and she radiates on stage. Fabulation requires the actors to take on several roles, and MaYaa has done that with specificity and nuance.”

“There’s Room for Us”

With her current projects, like with Fairview, she is pushing herself out of her comfort zone. Which is how she got herself into the arts in the first place.

Boateng grew up in Hyattsville, Maryland, where got her first exposure to performance through stepping. “I joined this Christian performance group with the initiative to give inner-city youth something positive to look forward to, to keep them out of trouble,” she explains. That taste of performance led Boateng to audition for a local performing arts middle school. She got in, and then for high school, she attended the Duke Ellington School of the Arts in Washington, D.C.

Boateng credits the arts for giving her direction and purpose. Growing up in an area where “crime and violence were prevalent,” the world of performance was “a safe home for me,” she explains. Even now, when Boateng goes home to Maryland, she is met with excitement and awe from family and friends. Being a working artist, “it’s unheard of where I’m from,” she says. She tries to go home as much as she can, to show those in her hometown who aren’t always represented in entertainment that “they can do that too. There’s room for us.”

“A Reminder That I Am on the Right Path”

At Fordham, besides majoring in theater, Boateng took classes in sociology and philosophy. She credits the school’s well-rounded core curriculum to making her a “multifaceted artist,” she says. “What I learned is that I can pull from all those experiences and use them for the stage. Being a full person makes you a better artist.” At the start of her senior year, Boateng was named the inaugural recipient of an endowed scholarship established by Fordham alumnus Denzel Washington, FCLC ’77, “a reminder,” she says, “that I am on the right path.”

After graduation, Boateng’s first professional gig was in Classical Theatre of Harlem’s July 2013 production of A Midsummer Night’s Dream, which was educational because up to that point, she hadn’t done Shakespeare before. Obviously, she had a knack for it. In summer 2017, after earning an M.F.A. in acting at New York University, she played the Soothsayer in Julius Caesar at Shakespeare in the Park, a controversial production in which Caesar was dressed to resemble President Donald Trump.

The show was met by protesters, who occasionally rushed the stage. While it was a scary experience, Boateng says it made her realize she wasn’t going to be satisfied doing work solely within the traditional theatrical paradigm, where the fourth wall can be unyielding and “oppressive,” and audiences have to be quiet. Theatergoers may have been angry at her and her castmates during Julius Caesar and Fairview, but that just meant the work moved them.

“It was exciting to know that this is what theater can do,” she says. “I don’t think people should come to the theater just to watch and go home. If you’re shook a little bit, that’s good.”

“Use Your Experience for Ammunition, and for Empowerment”

The projects that attract Boateng are usually things that are unpredictable. “I want to do work that is exciting,” she says emphatically. “That is bold, that pushes the mold, that doesn’t allow folks to be comfortable, that is about revolution. That gives voice to marginalized folks and says, ‘We exist, we’re here, we’ve been here, and we have stories to tell.’”

And Boateng wants to tell her own story too. She is currently working on a solo show, which recently had a workshop presentation at Williamstown Theatre Festival in Massachusetts, where she was a resident artist. In the show, she talks about her life in relation to that of singer, actor, and activist Eartha Kitt. She explains that Kitt’s given name was actually Eartha Mae, and the late Kitt considered Mae to be a separate persona.

The notion of masks and different selves fascinates Boateng, whose given name is Yaa, which means “born on Thursday.” As a child in school, she says she felt some shame about her name because her classmates would tease her about it. She wanted to have an American name instead, but her mother, a Ghanaian immigrant, encouraged her to “love the name I was given.”

“She said they can call you Yaa, or MaameYaa, or MaYaa for short, but you are not changing your name,” Boateng recalls. “She taught me the full meaning of my name: MaYaa Amoakowaa Boateng. Amoakowaa can be translated as ‘one who fights,’ and so my mother taught me that I am that little lady born on Thursday who is a fighter.”

Boateng’s solo show, she explains, is about “learning to embrace who I am and where I come from. It’s about coming to a place where you accept the fullness of who you are. And you use your experience for ammunition, and for empowerment.”

So far, part of her experience may have been to make audiences and herself uncomfortable, but through it, Boateng found something valuable: herself.

—Diep Tran is the senior editor of American Theatre magazine.