skip to main content
Return to Fordham University
You are at:Home»Fordham Magazine»Features»Maxwell’s Tribeca: A Modern Take on an Old-School Fordham Haunt
Photos by B.A. Van Sise
Like many good ideas, the concept for Maxwell’s Tribeca came out of a conversation at a dinner table.

This particular dinner table was in Westchester County, New York, on Thanksgiving 2010. Mike Casey, FCRH ’96, was telling Harry Hammer, FCRH ’55, LAW ’59, that he’d just gotten the keys to a one-story commercial property at 59 Reade Street in Manhattan, last occupied by an Italian restaurant called Spaghetti Western. He had known about that spot from his time as a New York City firefighter at Ladder 1 on nearby Duane Street, but Hammer, the father of one of Casey’s closest friends, knew even more about the property’s history.

“He was like, ‘Oh, the old Joe Maxwell’s space!’” Casey recalls.

From 1938 to the late 1960s, Joe Maxwell’s was a popular local hangout for students at Fordham’s 302 Broadway location, including Hammer, who earned his Fordham Law degree there. Hearing Hammer talk about the classic New York pub, which was known as much for the tall tales of its eponymous, Irish-born proprietor as it was for its sizzling steak, Casey knew what he wanted to do with the space.

“Once he said it, I realized using Joe Maxwell’s as an inspiration would be a great fit,” he says. After the light bulb went off and he decided to pay homage to the old Fordham haunt, there was only one person he wanted to go in as a partner: Alex Tortolani, FCRH ’02, who had managed several of Casey’s previous establishments, including Mugz’s, the popular bar near Rose Hill, which Casey had owned for several years.

“Mike came to see me at my job and told me to put in my two weeks’ notice,” Tortolani says. “We saw the vision and started working toward opening Maxwell’s Tribeca.” 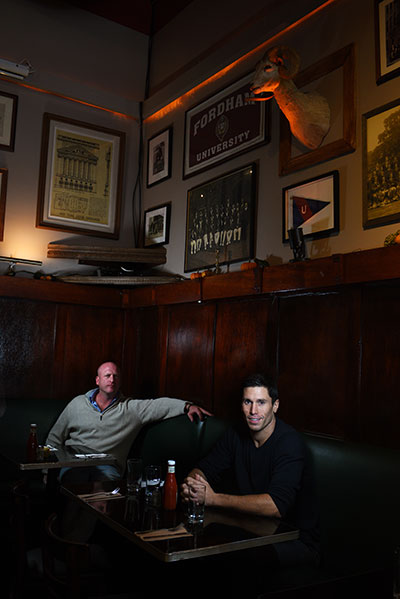 A Space Steeped in History

As Tortolani got involved with the project, he would visit the New York City Municipal Archives on Chambers Street, where he learned about the various businesses that occupied the building after it was constructed as a five-story commercial site in the mid-nineteenth century. After becoming a one-story building in the 1930s, the space started playing host to a series of restaurants, the longest-running of which was Joe Maxwell’s.

This sense of history made Casey and Tortolani realize that while they wanted to bring a modern sensibility to Maxwell’s, certain features from Joe Maxwell’s and subsequent tenants were worth keeping, like the original bar, which they only had to clean up a bit; a service bell hanging on a wall next to the kitchen, which they believe dates back to the building’s origins; and a pair of hazy, Art Deco mirrors behind the bar, aged over many years in pre-smoking ban New York.

In addition to these period touches, the co-owners have given the space a distinctly Fordham-friendly flair, with a large amount of wall space devoted to University memorabilia, including a maroon banner, a taxidermy ram’s head, and framed photos of old Fordham athletics teams.

Hearty Food, Both Classic and Contemporary

Like the décor, the menu at Maxwell’s, which FORDHAM magazine’s staff sampled over lunch on a brisk October day, is full of classics that are refined and updated with some modern twists. The baked spinach and artichoke dip, served with warm pita bread, was satisfying comfort food that, while rich, was not so heavy that it put us down for the count. Another highlight from the appetizer menu was the grilled lamb lollipops, cooked medium-rare and served with a tangy tzatziki sauce. A Cajun shrimp and salmon Caesar salad would have been large enough as a meal for one but was also great to share, with the well-seasoned seafood giving it a nice bite. The salmon reappeared in one of the large plates, a pretzel-encrusted Scottish salmon dish served with broccoli, jasmine rice, and a ginger-lemon cream sauce. The fish was cooked perfectly and the sauce’s bright citrus notes gave the whole dish a lovely flavor. 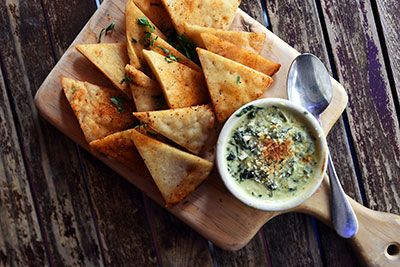 The two showstoppers, though, were both beef dishes. The Jameson Black Barrel burger, which seemed to be a very popular choice among the Maxwell’s lunch crowd, was a huge, half-pound patty wrapped in bacon, cooked with Jameson Black Barrel Select Reserve bourbon, and topped with whiskey slaw and Irish cheddar and porter cheese. The meat was juicy and the flavors all mixed together for a huge blast of umami, everything you could want in a midday meat fix.

And while the burger is deservedly popular, those with an appetite for nostalgia will perhaps be more interested in the saloon steak frites, a dish inspired by the legendary steak sandwich at Joe Maxwell’s that fed many a hungry Ram after classes at 302 Broadway. Our steak was served on the rare side and was well-seasoned. It rested atop a heaping pile of haricot verts and delicious potato wedges. This thick-cut version of frites allowed for the ideal fried potato texture profile: crispy and dark on the outside, soft and light on the inside. 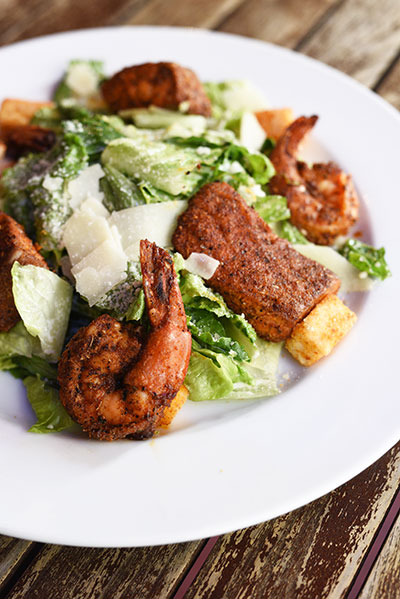 To wash it all down, Maxwell’s has a beer menu with a variety of drafts and bottles, a small selection of reasonably priced wines by the glass and bottle, and a mix of both classic and creative cocktails, including a very solid old-fashioned, a tart and refreshing blackberry mojito, and a watermelon martini that put a bright spin on the boozy original.

As satisfying as the fare is at Maxwell’s, Casey and Tortolani have taken just as much care to make the restaurant a home away from home for their fellow Fordham grads. They say that in addition to going to Maxwell’s for events like athletics fundraisers and informal reunions, alumni often find themselves stopping by for a quick bite or beer. And sometimes a patron who didn’t know about the restaurant’s Fordham connections will look up and take delight in seeing all the tributes to their alma mater.

“It’s amazing how many people come in here and see the Fordham stuff and are like, ‘Oh, I went to Lincoln Center’ or ‘I went to the Law School,’ Tortolani says, noting that such moments occur several times a week on average. “People who go to Fordham tend to stay in the city, so it’s a good connection for us.”

Especially neat for them is when they get customers who remember Joe Maxwell’s from their days at Fordham’s old downtown home.

“It’s cool to have old-timers come in and tell you that this was their go-to college bar,” Casey says. “They really appreciate that we brought back that aesthetic and that connection to Fordham.”

Sometimes these visitors bring gifts, which can come in the form of items to add to the wall or stories about the old days. Casey says it’s always fun to hear about the hierarchy of the bar seating at Joe Maxwell’s, where first-year students were relegated to the dark back of the bar and juniors and seniors got the prime seats near the large front windows.

As for wall art, one of their favorite pieces of memorabilia is a photo of Joe Maxwell himself, standing outside his establishment, smiling broadly in a sharply tailored suit complete with bow tie and pocket square. That photo, which hangs on a post by the front windows, was from a Fordham Law yearbook that a group of 302 Broadway alumni brought in one day. 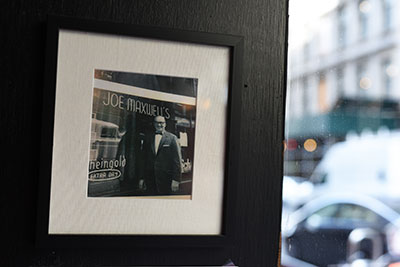 That type of strong alumni network is something that both Casey, who majored in economics, and Tortolani, who majored in communications, have found particularly valuable about their time at Fordham.

“I think aside from the studies and the business knowledge, what was so great was the relationships and the people,” Casey says. “So many relationships stay in the city—bridges of communication between different fields of work. Hands down, if people want to stay in the city, I always recommend going to Fordham.”

Hammer, who has stayed very involved with Fordham over the years and goes to every home football game, would likely agree with Casey’s assessment. He still works in the neighborhood and drops by Maxwell’s whenever he can. Despite his fond memories of the original Joe Maxwell’s, he says that Casey and Tortolani have managed to improve upon their predecessor’s place, making it “much more convivial.”

The appreciation goes both ways, as Casey and Tortolani have made sure to pay tribute to the man whose stories inspired them to create an old-school New York pub that honors its forebears while offering a comfortable and satisfying dining option for City Hall and courthouse workers and tourists alike.

“I was at Maxwell’s six months ago, and they brought me to the back and had me look up at the wall,” Hammer recalled. “And there was a picture of me from when I was four years old. I have no idea where they got it!”