skip to main content
Return to Fordham University
You are at:Home»Fordham Magazine»Features»Matthew Trebek Donates His Father’s Jeopardy! Wardrobe to Men Seeking a Second Chance
Matthew Trebek and his father, Alex Trebek, in 2015. Photo by Bruce Gilbert
Alex Trebek enriched the lives of others through his hosting of Jeopardy!, his philanthropy, his service work—and, now, through his wardrobe.

After the TV star died on November 8, 2020, his son, Matthew Trebek, FCRH ’13, got the idea of donating much of his large assortment of clothes: 14 suits, 58 dress shirts, and 300 neckties, as well as shoes, belts, dress slacks, and other items.

The recipient? The Doe Fund, a nonprofit in New York City that Matthew Trebek has supported, which helps men coming back from homelessness, incarceration, and addiction who are seeking to rebuild their lives and find work.

“The Doe Fund made perfect sense, since these are guys who are going on job interviews and need second chances,” Matthew Trebek, a New York restaurateur, told The New York Times.

The management of Jeopardy! embraced the idea and helped deliver the clothes, the show announced on February 9. The items were sure to make an impact on the lives of those served by the Doe Fund, its president, Harriet McDonald, told CBS Weekend News.

“People lose a lot of dignity if they’re homeless or incarcerated, and then all of a sudden, they’re in a work environment,” she said. “If you wear a good suit—and, of course, whose suits could be better?—you fit in.”

A Host Who Gave the Utmost

Alex Trebek was beloved as the poised, cordial host of Jeopardy!, which he hosted for nearly four decades before succumbing to pancreatic cancer last November at the age of 80. Along with his wife, Jean Trebek, he was a prolific philanthropist who supported a variety of causes including World Vision, an international anti-poverty organization, and funded educational and cultural initiatives such as a public policy forum and innovation and challenge fund at the University of Ottawa, Trebek’s alma mater.

The Trebeks also created a scholarship fund at Fordham for students from north and east Harlem, reflecting their belief in the power of education, and they have given of their time to the University as well. 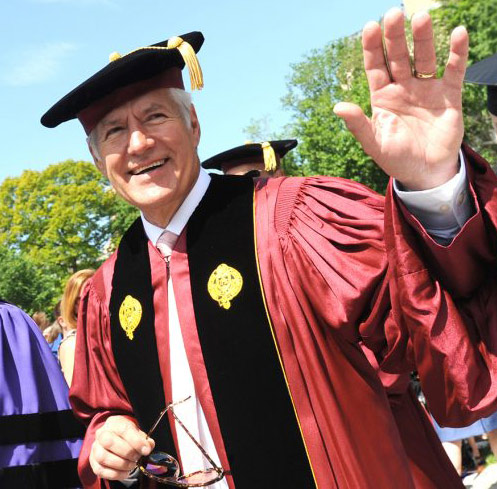 Alex Trebek at Fordham’s commencement in May 2011. Photo by Chris Taggart

The University awarded Alex Trebek an honorary doctorate at its 2011 commencement ceremony and presented them with the Fordham Founder’s Award in January 2020 in Los Angeles.

Trebek emphasized kindness and empathy, telling the audience during one of his final Jeopardy! appearances, “We’re trying to build a gentler, kinder society, and if we all pitch in just a little bit, we’re going to get there.”

Matthew Trebek is co-owner of three Harlem restaurants—Oso, Lucille’s, and Pizza by Lucille’s—who also has a drive for service. He and his business partners created a weekly soup kitchen, Lucille’s Family Meal, for people in North Harlem living in poverty or transitional housing, as he told his mother in an interview on her web platform, insidewink. Held at St. Matthew’s Baptist Church, the soup kitchen aims for “a more dignified dining experience” for its guests, he said.

He told CBS Weekend News that his father would be pleased to see how his former wardrobe was being put to use.

“I think [it] just really falls in line with everything that he believed, and I think that would mean a lot to him.”