skip to main content
Return to Fordham University
You are at:Home»Fordham Magazine»Alumni News»Marymount Alumnae Celebrate ‘True Sense of Community’ at Annual Reunion
Marymount College alumnae gathered to recognize three women being honored by the Marymount College Alumnae Association Board during a virtual reception, held as part of Fordham’s virtual Jubilee weekend.
Upon receiving the Alumna of Achievement Award at the annual Marymount College reunion, held virtually on June 5, U.S. Rep. Rosa DeLauro, MC ’64, credited her parents with instilling in her the drive to push herself into the world’s “corridors of power.”

She shared a quote from an article her mother, Luisa, wrote in 1933, exhorting fellow members of a local political club to express their opinions with confidence.

“It is not my intention to be critical,” wrote DeLauro’s mother, who would go on to serve for 35 years on the Board of Aldermen in New Haven, Connecticut. “Rather, my motive in writing this article is to encourage the female members of this organization to take a more active part in its affairs. … I have noticed that the girls, unlike the men, are timid in asserting themselves, and many a good idea is lost, having been suppressed by its creator.

DeLauro, who entered public service after earning degrees from Marymount College and Columbia University, has been serving Connecticut’s 3rd Congressional District since 1991. In January, she became chair of the House Appropriations Committee—only the second woman to lead the group responsible for shaping the federal government’s discretionary spending priorities. She’s also the ranking member on the subcommittee that oversees the nation’s investments in education, health, and employment. 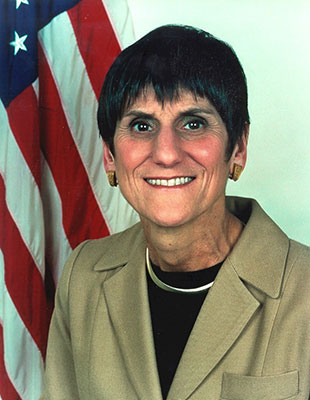 DeLauro was one of three women honored by the Marymount College Alumnae Association Board during the virtual reception, held as part of Fordham’s virtual Jubilee weekend.

Kathy Higgins, MC ’71, received the Gloria Gaines Award, the board’s highest honor, given to an alumna for service to one’s church, community, and Marymount. Higgins’ service began as a student at Marymount, when she worked in the infirmary on the Tarrytown campus. For the past 30 years, she has worked for ARC Westchester, a nonprofit offering support to individuals with intellectual and developmental disabilities in Westchester, New York.

Higgins joked that some people would look at her paycheck and think she was a volunteer, but service and volunteering are what offer her “a true sense of community.”

“I love the work and consider it a privilege to be able to help so many wonderful families,” she said. “Marymount College made a huge impact on my life, not only for the wonderful education I received but also the incredible people I have met. It’s sad that the college we knew and loved is no longer in Tarrytown,” she said of the women’s college, which was part of Fordham University from 2002 until the college closed in 2007. “But I am thankful to those who are keeping the spirit of Marymount alive.”

Teresita Abay-Krueger, MC ’80, was honored with the Golden Dome Award, presented to the alumna whose efforts of continuous service have advanced Marymount as an institution.

While studying biology and chemistry at Marymount in the late 1970s, she landed an internship with Union Carbide Corporation—located close to campus—and that experience, along with some inspiration from three of her professors, spurred her into a 20-year career in research and development at IBM. After leaving IBM, she founded a New York-based consulting practice.

Accepting the award, Abay-Krueger said that, as a commuter student, she often wondered if living off-campus put her at a disadvantage. Today, she realizes that the personal attention and care she received from professors and administrators, and the bonds she formed with her classmates, inspired her to pursue excellence nonetheless. 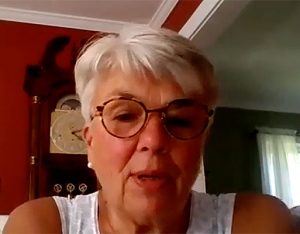 “It’s always been about being surrounded by that intellectual environment in Marymount; whether I was with other students or with many of the professors, or even among the administrative people, there was always this drive for excellence and intellectual attainment, and I really appreciated that above anything else,” Abay-Krueger said.

“When you’re surrounded with determined, smart women all striving to be their very best, you can’t help but be inspired by that as well—and everyone on this call demonstrates that,” she said.

During the event, attendees got to take a “slide” down memory lane as they viewed photos and spoke about Marymount memories that had been submitted ahead of time. Event organizers also asked Tarrytown-themed trivia questions throughout the event, in honor of Marymount’s original campus location.

Paula Mahayosnand, MC ’93, president of the Marymount College Alumnae Board, said that while she wished they were able to gather at Fordham, she was nonetheless happy to be together in spirit.

“For more than a dozen years, we’ve remained committed to coming together on the Rose Hill campus, meeting each other in person and celebrating our fellow alumni from across classes,” she said. “I don’t think we could have predicted we would be in this for another 16 months of the pandemic … but we have adapted, and here we are today.” 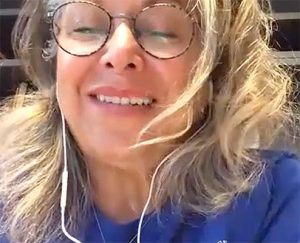 In a pre-recorded message, Joseph M. McShane, S.J., president of Fordham University, welcomed the Marymount graduates home and congratulated them on their recent fundraising success on Giving Day, saying a record number of people contributed to the Marymount Legacy Fund—which the board created to provide scholarship support to young women at Fordham who “embody the Marymount spirit through learning and leadership.”

“The alumni community showed the power of their love for Marymount, their care for young scholarship recipients, and their commitment to the efforts of the members of the Religious of the Sacred Heart of Mary,” he said. “More alumni donated this year than ever before. I applaud your efforts.”

Father McShane also congratulated this year’s award winners, and he echoed Mahayosnand’s wishes to see everyone in person sooner rather than later. “I hope that you’ll continue to stay connected, and that I’ll get to see in person again very soon,” he said.

Still, for Heather McWilliam, MC ’88, secretary of the Marymount College Alumnae Board, the virtual event was an emotional one.

“I didn’t expect the overwhelming feeling that I hope all of us are receiving by just sharing this moment,” she said. “I think all of us are here today sharing this event because of our love, and [because we’re]  cherishing moments of what Marymount represents and what it did for us.”