skip to main content
Return to Fordham University
You are at:Home»Fordham Magazine»Martha Clippinger: An Eye for Color

“I’ve always had a kind of addiction to color,” says artist Martha Clippinger, FCRH ’05. “And I think Mexico fed that addiction, because it’s a country that’s just so saturated in color.”

A visual arts and art history double major while at Fordham, Clippinger spent six months last year on a Fulbright grant studying traditional crafts such as weaving and natural dyes in and around Oaxaca, Mexico.

Though she had lived in Mexico City for a month after completing her MFA in 2008, it was a trip she took to Puebla, led by art history Professor Barbara Mundy, as a junior at Fordham that first fueled her love of the country and its traditional crafts.

“It was an action-packed week, and I was just blown away. The people were wonderful, the landscape was incredible, the food was delicious. It was just overstimulating and thrilling. I felt very comfortable and happy there. And I knew I wanted to go back.”

The trip included a visit to some weavers in Oaxaca who used natural dyes. “I had never had access to that type of color. There was this whole world of abstraction and color that I hadn’t been exposed to before Fordham, before that trip. All of these forms that attracted me to modern art but were now being perceived outside of that context, in a much more ancient place.”

During her first month on Fulbright back in Oaxaca, Clippinger happened upon an advertisement for classes in Zapotec, a local indigenous language with hundreds of dialects.

“I thought that it would pay off to communicate with these indigenous communities in their own language. And it ended up really enriching my experience.”

Because she could speak the dialect of Zapotec spoken in one of the artisan marketplaces, Clippinger developed a close relationship with husband-and-wife team of weavers, Licha Gonzalez Ruíz and Agustín Contreras Lopez, in a town about 25 miles from Oaxaca—Teotitlán del Valle. And from that friendship sprang a creative partnership. 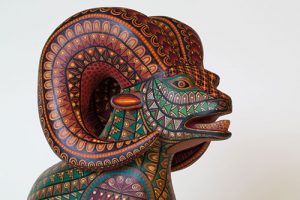 Related story: It’s clear why Clippinger chose a ram for her uncle’s alebrije (pictured above). Her family’s history is deeply intertwined with Fordham’s own past. Photo by Peggy Brenner

“Economics usually influence what these weavers make. They make what they think the tourists will buy, or what is commissioned from abroad. Licha had a notebook full of designs,” Clippinger explains, but she and her family usually did not pursue those that were untraditional.

“I asked if they would be interested in making a rug, or tapete, of my design, if they were open to it. For them, it was great to make a rug they knew was already paid for. But it was also fun, fascinating, and challenging to me.”

The greatest challenge was explaining her artistic vision to her new partners. As Richard Kalina, professor of art history at Fordham and one of Clippinger’s mentors, explains: “Martha has always had a well-made quality to her work, but she knows when to let some of the gloss go. What Martha is able to do is subvert your expectation, to add the spice that makes things interesting and holds you.”

Explaining this sense of imperfection in a new language was difficult for Clippinger at first. “I felt I really had to articulate ideas about my work in a new way. My work is rooted in abstraction but also in imperfect symmetry, imperfect geometry—for example, a broken pattern. And I had to emphasize this because, of course, they are calculating it all perfectly and wanting everything to match,” Clippinger says.

Clippinger continued to work with the couple on several more brightly colored woolen rugs, many of which were exhibited this past spring at the Hionas Gallery in New York City.

It’s a connection that Clippinger has maintained since completing her Fulbright. In January 2015, Clippinger returned to Mexico and stayed with the family. She explains that the passion and respect she has for their work has expanded into a desire to foster not only an artistic partnership but a true friendship.

“Sometimes what one person can contribute can change someone’s life. It was nice to go back and be able to help them out as much as they helped me out. I really hope we can continue the collaboration.”