skip to main content
Return to Fordham University
You are at:Home»Fordham Magazine»Features»Marking Juneteenth with a Look Back at the Struggle for Freedom
An early celebration of Juneteenth in 1900 at Eastwoods Park in Austin, Texas. Photo provided by Michele Prettyman
On the same day that Juneteenth became a federal holiday, a panel of Fordham scholars explored the history and contemporary significance of the holiday marking the abolition of slavery in the United States—which proved to be “a mixed bag” for the enslaved people who were liberated, said one of the panelists, Tyler Stovall, Ph.D.

“For some people it did work out; for some people, it did not,” said Stovall, dean of the Graduate School of Arts and Sciences, during the June 17 panel discussion offered as part of the virtual 2021 Block Party reunion for the Lincoln Center campus.

Rafael Zapata, Fordham’s chief diversity officer, moderated the discussion of Juneteenth, which marks the date—June 19, 1865—when the abolition of slavery was completed with the arrival of Union troops at Galveston, Texas, more than two years after the Emancipation Proclamation.

The discussion ranged from the history of Juneteenth celebrations to the emancipation process in Caribbean nations to the aftermath of slavery’s abolition in the U.S.

Liberation “was something that Black people fought for themselves; they weren’t just sort of waiting around for it to happen for them,” said Stovall, author of White Freedom: The Racial History of an Idea (Princeton University Press, 2021). The Civil War saw the largest slave revolts in American history, as well as “massive mobilization” of formerly enslaved people to serve in the Union armies, he said. But promises of the land that former slaves needed to establish their own farming livelihoods fell through, for the most part, forcing them into sharecropping, a form of pseudo-slavery in which they were “under the thumb of their former masters,” he said.

One of the panelists, Tyesha Maddox, Ph.D., assistant professor in the Fordham Department of African and African American Studies, described how many formerly enslaved people turned to benevolent associations or mutual aid organizations “in which they came together [and]pooled their resources of money in order to take care of themselves in the ways that the government was not providing help for them.”

The Struggle in the Caribbean

Panelists described a fitful abolition of slavery throughout Caribbean nations, with freedom often seeming precarious. As in the United States, many slaveowners in these nations still continued with slavery months or years after it was abolished “so that they can continue with this free manual labor,” Maddox said.

Stovall noted that Haiti was isolated and made to suffer after achieving its independence in an 1804 revolution that abolished slavery. The government had to pay reparations to the French for the seizure of slaveowners’ property, and it wasn’t until the early 21st century that France finally abolished all duties on Haiti stemming from its revolution, he said.

In Guadeloupe, slavery was abolished for only about a decade before it was reestablished under Napoleon, and during World War II there were rumors that France’s Vichy government would bring slavery back to the Caribbean, he said. “There was always this sense that … you couldn’t rely on [freedom],” he said.

The Growth of African American Communities

Another panelist, Michele Prettyman, a scholar of African American cinema and visual and popular culture in the Fordham communication and media studies department, noted the wave of Black elected officials in the U.S. following the Civil War as well as the growth of African American communities—like the one ravaged during the Tulsa Race Massacre of 1921.

“Tulsa is … the most striking embodiment of what happens as a result of this incredible wave of business and leadership and education,” she said. At the same time, “even killing people in a very literal sense did not destroy this animating impulse of Black life that comes out of these moments of just real despair and real darkness and … just tremendous odds and obstacles,” she said.

Later, asked how the idea of freedom is expressed in Black creativity, she said it is not just under the purview of historians. “If we keep it in our poetry and our art and our music and our culture, it becomes something that is owned and shared, and not just something that’s commemorated on single days or in single moments,” she said. “It should be a part of all of our lives, intimately, and how we legislate, how we vote, how we commemorate.”

Asked by Zapata about the current “assault on voting rights” in the U.S., Stovall said that “there’s a real lack of respect for the very idea of democracy.”

“Even though you have, of course, the rejection of this being in any way racially characterized … it is really hard to escape the impression that if Black people were not able to vote, a lot of conservative white people would be a whole lot happier,” he said.

Stovall said the federal government’s creation of a Juneteenth holiday “has all come together really fast,” but also pointed out state legislatures’ recent moves to prevent school districts “from teaching the idea that racism is an intrinsic part of American history.”

“So how you can hold these two concepts together at the same time is frankly beyond me,” he said, “because if you acknowledge the role of slavery to the extent that you have a national holiday to celebrate its abolition, that says something very profound about American history, and so I think this is a country that’s still very much struggling with how do you deal with these different concepts.”

Stovall ended the event by turning his computer to show a lit lamp that was owned by his great-great-grandmother, who was born a slave. “The lamp still shines,” he said. “Our history still shines. And I think Juneteenth represents the fact that our experience as a whole still shines, down to the present day, and will shine in the future.” 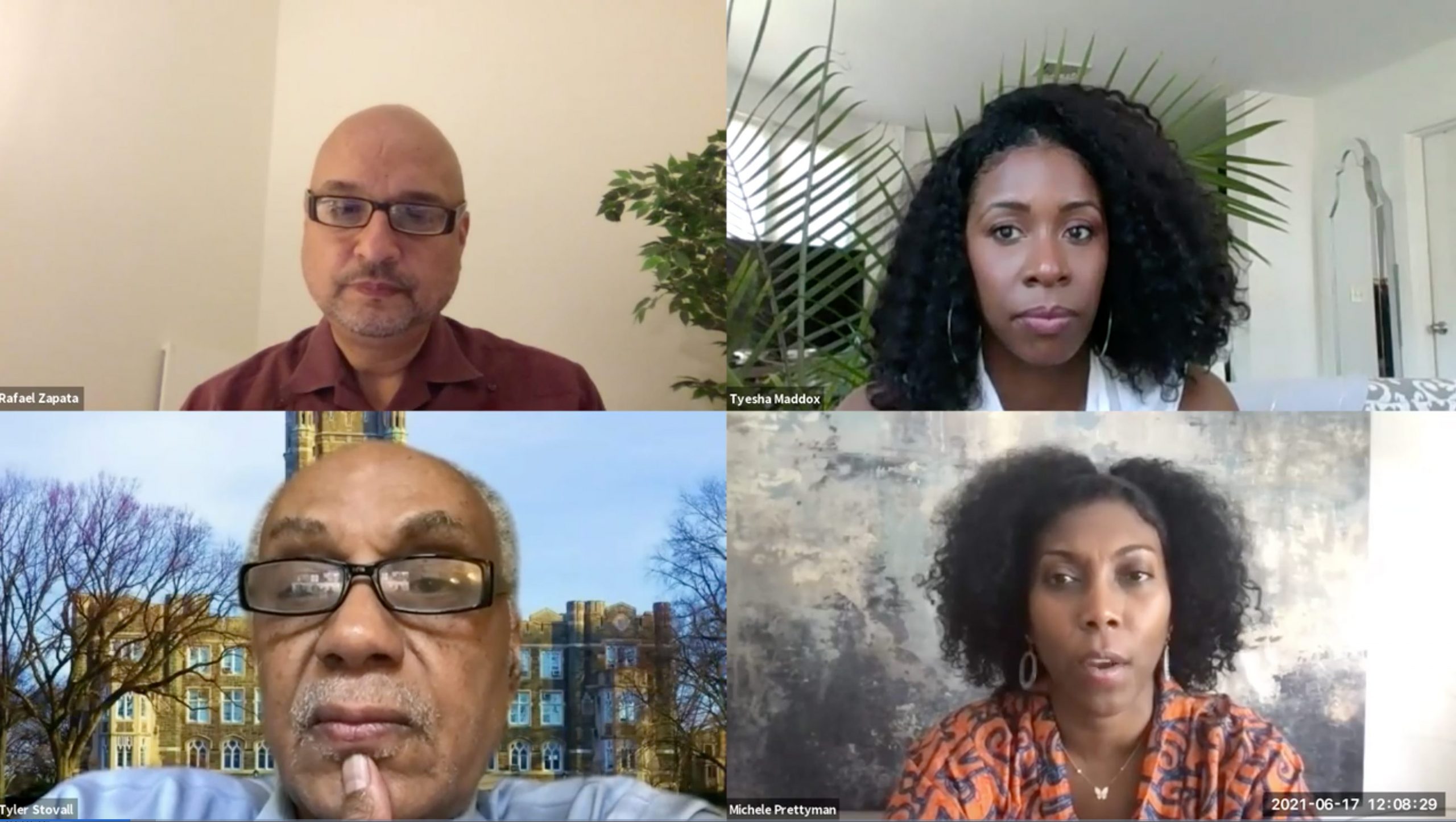