In his latest book, Make Today Matter (Loyola Press, 2018), best-selling author Chris Lowney, FCRH ’81, GSAS ’81, identifies 10 habits to help readers cultivate greater self-awareness, stick to their ideals, and learn to recognize the “inner demons” that threaten to derail them from a happier, more effective life. He reminds readers that, although life is filled with uncertainty, we ultimately control “what matters most: how [we] behave, react to life’s vicissitudes, and treat others along the way.” 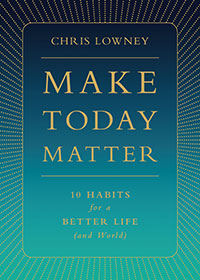 In short chapters with titles like “Change Your Little Part of the World” and “Be More Grateful,” he shares stories of teachers, nurses, executives, and others who model these habits. With self-deprecating wit, he also shares stories from his own experiences.

For the past five years, Lowney has served as chair of the board of Catholic Health Initiatives, one of the largest healthcare systems in the United States. But he has had a multifaceted career, one that has included several major transitions he did not foresee.

“As an eighteen-year-old,” he writes, “I imagined that my high-beam headlights were illuminating a straight path through life and all the way to my deathbed: I entered a novitiate that year, fully expecting to end my days as a Jesuit priest. Then life happened. I discerned that my calling in the world lay outside the Jesuits.” He left the order in the 1980s, after earning degrees in medieval history and philosophy at Fordham, and went on to become a managing director at J.P. Morgan & Co., leading groups in New York, Tokyo, Singapore, and London.

In 2003, not long after leaving J.P. Morgan, he published his first book: Heroic Leadership: Best Practices from a 450-Year-Old Company That Changed the World. In it, he drew on his rich knowledge of Jesuit history and teachings, as well as nearly two decades of experience in international banking, to present St. Ignatius’ compañía, the Society of Jesus, as a model of business leadership for the 21st century.

For Lowney, the Jesuits have been successful for centuries partly because they offer a way of thinking about leadership that is fundamentally different than most popular models. Instead of taking a top-down approach, focusing solely on the insights of people in charge, Jesuit training is based on the premise that each person can tap into their leadership potential by continually cultivating greater self-awareness. Heroic Leadership became a bestseller and has been translated into 11 languages. 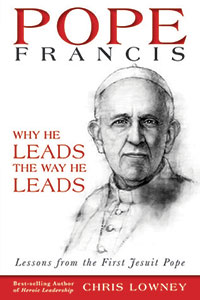 Since then, Lowney has published five other books, including Pope Francis: Why He Leads the Way He Leads (Loyola Press, 2013), and lectured in more than two-dozen countries on business ethics, decision-making, and other topics. In 2006, he established a nonprofit, Pilgrimage for Our Children’s Future, to support various education and healthcare initiatives throughout the world.

He has also been an adjunct professor at Fordham’s Gabelli School of Business, where for the past two years he co-taught a course on leadership for MBA and Executive MBA students, guiding them—literally—in the footsteps of St. Ignatius. Students in the course travel to Spain in early October and trek some of the same route walked by Ignatius 500 years ago. In the process, Lowney told Fordham News in 2016, he and the students learn “about perseverance, planning, coaching, empathy, setting goals that will carry us forward, and, above all, about being self-aware people with a deep sense of purpose.”

What’s the best piece of advice you’ve ever received?
“The most successful people I know are good at Plan B,” said James Yorke, one of the mathematician-pioneers of chaos theory. I’ve found it a very liberating idea (though I admittedly spin it beyond his initial concept). Whether it’s writing books or creating strategic plans for entrepreneurial ventures I’ve been involved with, it won’t come out perfectly the first time. So what? Let’s try our best, learn from failures, course correct, make plan B better, and have some fun along the way. That way of thinking leapfrogs the analysis-paralyzed fear of failure that so often stalls individuals and organizations. The literary-minded might prefer Samuel Beckett’s rendering of the same idea: “Ever tried. Ever failed. No matter. Try again. Fail again. Fail better.”

What’s your favorite place in New York City?
Hmm. How about 93rd Street and 34th Avenue in Jackson Heights, Queens. That’s where I grew up. My apartment building, church, school, and playground all on one block; passels of kids, always up for stickball, skully, cannon sticks, manhunt, etc. Granted, that block would look pretty nondescript to a visitor. But I guess that’s part of the point? Ultimately, it’s the people that turn places into favorites, no? But if you want a spot with more pizzazz, how about Wave Hill in my adopted borough, the Bronx. Go there for Sunset Wednesdays in the summer! You’ll love it.

What book has had a lasting influence on you?
The Acts of the Apostles. The Catholic Church is suffering a profound crisis. Consider, for example, our inability to engage young people as one serious challenge among many: When are we going to confront our challenges frankly and tackle them with creativity and urgency? We 21st-century Catholics have to drink whatever Kool-Aid those first-century Christians were drinking in the Acts of the Apostles. (It was, of course, the Holy Spirit that they imbibed.) Granted, Acts is not exactly a Tom Clancy-style thriller, but it’s a thriller nonetheless: frontier spirit, internal squabbles, shipwreck, and cameo leadership roles from holy entrepreneurs like Lydia, Priscilla, and Phoebe the Deacon. (Notice anything about those names?)

Who is the Fordham grad or professor you admire most?
Technology (think app-laden smartphones) is turning life into a “look at me” production. I’m edified and humbled by unsung Fordham alums around my time who do great things daily without broadcasting their derring-do for social media oohs and aahs. I’m thinking of J, a lawyer who helps lead a great social services agency for the impoverished; and of M, who helps deliver healthcare services for prison-involved populations; and of M, M, and plenty more like them: self-sacrificing parents who have set great examples for their kids.