skip to main content
Return to Fordham University
You are at:Home»Fordham Magazine»Features»Pro Runner Mary Cain Describes Abusive Training Culture, Shares Message of Resilience at Sports Business Symposium
Mary Cain, GABELLI ’19 Courtesy of Tracksmith
In 2013, at age 17, Mary Cain was one of the top runners in the world, the youngest U.S. athlete ever to compete on a World Championships team. But soon after joining Nike’s elite Oregon Project to train with Alberto Salazar, her health and her promising pro career deteriorated.

Cain said that her coaches forced her to lose weight, which led to the loss of her period for three years and stress-related injuries, including five broken bones.

“You don’t go from losing weight to breaking bones in two days, right? There’s usually this long period of time where there’s this physical deterioration,” said Cain, GABELLI ’19, at Fordham’s ninth annual Sports Business Symposium, held virtually on March 25. “Throughout the day, I just was more prone to having silly things, like headaches, to just being more hungry, to being a little bit more irritated as a result, and to just being visibly fatigued.”

She began to dread the sport she had loved since she was in fifth grade, when she surprised her gym teacher by running a mile in 6:10. Her physical, emotional, and mental health began to spiral—she developed an eating disorder and began to cut herself and have suicidal thoughts.

“What once had been something that came naturally [to me], this beautiful experience … suddenly became a slog,” Cain said. “So often, I think, as people, we like to separate our physical, emotional, and mental well-being into separate categories, but they’re so symbiotic, and the longer that I was in this really circular system, the more my body broke down.”

Before she joined the Nike Project, a team of the fastest athletes in the world, Cain had a decision to make—compete in college or go pro right away. She said she felt going pro through the Nike Project would allow her to attend college and get a strong academic foundation while pursuing running. She moved from Bronxville, New York, to Oregon and completed one year at the University of Portland before transferring to Fordham University’s Gabelli School of Business, where she earned a bachelor’s degree in 2019. After she moved back to New York, Cain kept training with the Nike Project until she left for good in 2016.

In a November 2019 video piece for The New York Times, Cain said the all-male coaching staff led by Salazar did not include a certified sports psychologist or certified nutritionist, and that Salazar had tried to put her on birth control pills to lose weight, and harmed her mental health by berating her and humiliating her in front of her fellow athletes.

“Women in sports are treated harsher when it comes to body image,” she said during the Fordham symposium. “And I believe the reason is mostly societal—the expectation to be a lighter weight is more attached to [women’s] looks [and]their meaning. And it’s this really toxic culture that I think permeates professional sports in a way where weight still matters for men, but the dialogue is different.” 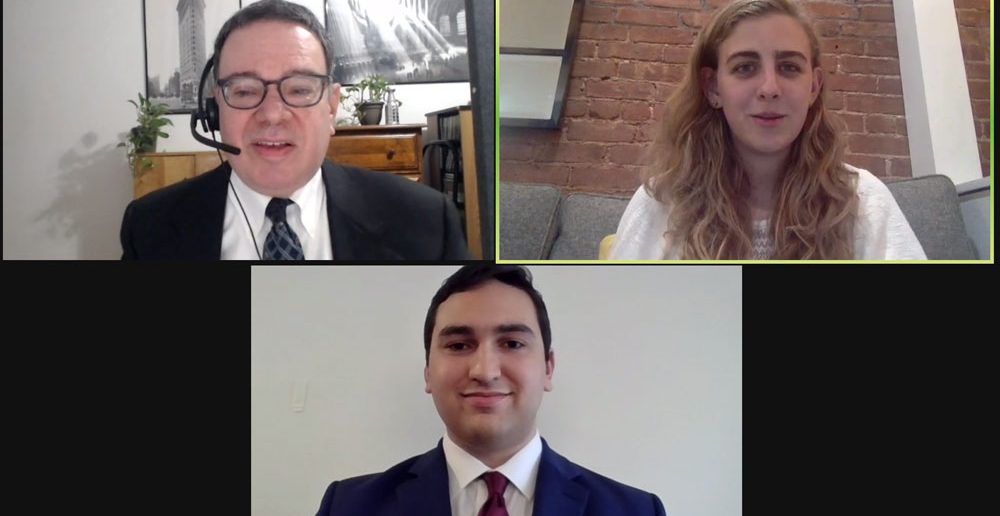 Starting a Conversation, Advocating for Reform

After Cain’s story came out, many other female athletes spoke up and supported her claims, including Kara Goucher, an Olympic distance runner who had trained under the same Nike program. Salazar denied the allegations of abuse, but several weeks before Cain’s story was published, he had received a four-year ban from the sport for doping violations, and Nike had already shut down the Oregon Project.

In January 2020, Nike completed an internal investigation of Cain’s allegations of abuse, and her story helped Nike identify initiatives to “do better in supporting female athletes,” including increasing the number of women coaches in sports and investing in scientific research into the impact of elite training on women and girls.

That same month, the U.S. Center for SafeSport, a nonprofit organization focused on ending all forms of abuse in sport, placed Salazar on its “temporarily banned list, a disciplinary action that could result in a lifetime ban,” according to The New York Times.

Cain said her goal in sharing her story is to make sure that no other athletes, particularly female athletes, have to go through the suffering she did.

“I hadn’t known that the situation was bad until somebody [came out and told me], ‘That is bad. That shouldn’t happen to you.’ It’s normalized,” she said. “I realized I didn’t want any other person out there to … be self-loathing, beat themselves up, and have this just incredibly negative experience, because they were under an emotionally abusive coach, and almost didn’t know it.”

Cain has called for reforms to the sport. In addition to hiring more women coaches, which Nike has pledged to do, she would like to see teams provide more support for young athletes, such as mental health counselors and trained sports psychologists who are separate from the coaching staff. She also thinks coaches should undergo more training to be certified to work with young athletes.

“I think [U.S. Center for SafeSport] programming is trying to change that and really show how somebody who’s going into coaching is going to be working with traditionally very vulnerable, younger people who are in need of a mentor and a leader,” she said. “And so the more education that you can give yourself to be that for a young athlete is important.”

Cain has also called for changes in how athletes make a living in the sports world. Right now, many pro runners and other athletes competing in Olympic sports are paid as independent contractors.

“We make our money through sponsorship … and as a result, we’re really just singular athletes floating in the sea, trying to advocate for ourselves. And I believe what would be most beneficial is if there was one organization, that if we are going to be representing Team USA, we are all employees of [that organization].”

Cain currently works full time for Tracksmith, a running apparel company, as an employee and an athlete. In her role as the company’s New York City community manager, she’s in charge of developing relationships with teams and organizations in the city. She also still runs professionally as a member of USA Track & Field, and works part time for the nonprofit New York Road Runners.

Cain said that her working relationship with Tracksmith allows her to be an athlete and a full-time employee, which makes her eligible for benefits, such as health insurance and maternity leave, that she wouldn’t have had as an independent contractor.

Cain said this experience has been “incredibly rewarding” because it allows her to not only develop as an athlete but also as a sports business professional.

A Look Across the Sports Business Industry

The event also featured a talk from Tim Hinchey, the president and CEO of USA Swimming and the USA Swimming Foundation, and a panel on disruptors in sports media.

Other panels focused on some of the latest trends in sports business in partnerships, communications, and community relations, as well as how the COVID-19 pandemic impacted their organizations. 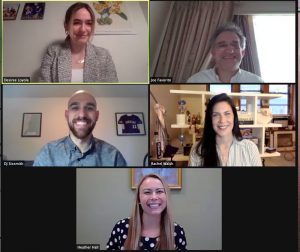 The communications and community relations panel featured Fordham alumni Joe Favorito, FCRH ’85, who works as an independent sports, entertainment, and branding consultant, and DJ Sixsmith, FCRH ’15, the social media manager and host at CBS Local Digital Media, along with Heather Hall, a senior director of community relations at BSE Global, which operates the Barclays Center, and Rachel Walsh, vice president of communications at Excel Sports Management.

For Nicholas Lehman, a Gabelli School of Business senior majoring in marketing and serving as president of the Sports Business Society, this year’s symposium took extra planning, but it was an opportunity to reach a broader audience.

“We had prepared for months on last year’s symposium, which was canceled just three days before we were due to host it” on campus, Lehman said. “This year, we [hosted]the symposium virtually for the first time in our history. We were excited to make this year’s event the largest and most wide-reaching event we have ever hosted, making it a truly national event with speakers and attendees from around the country.”