skip to main content
Return to Fordham University
You are at:Home»Fordham Magazine»Features»Fordham’s Ukrainian Community Grapples with War from Afar
Members of the Fordham community participated in a rally on February 25, 2022 after Russia invaded Ukraine. Photo by Julia Kadar.
For the past month, since Russia launched its full-scale invasion of Ukraine, Fordham students, faculty, and alumni with ties to Ukraine have been experiencing a wide range of emotions.

At boisterous local rallies and during intellectual discussions of the war, they’ve been inspired by expressions of support for the Ukrainian people, they said, but in quieter moments, they can be overcome by grief.

“There has been so much guilt and helplessness—it’s hard to do anything,” said Julia Kadar, a first-year Fordham College at Lincoln Center student. “I feel like, how dare I study for midterms and do homework and worry about my grades and worry about my future when there are people, children, whose futures have been taken away from them.” 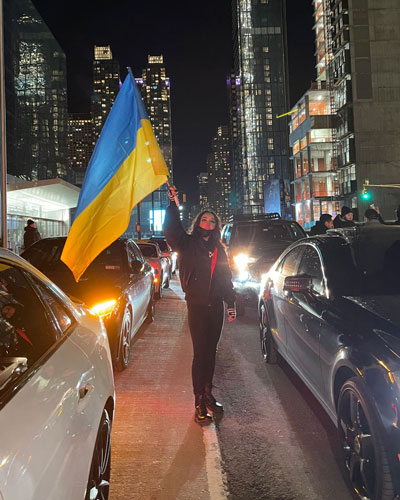 Julia Kadar holds a Ukrainian flag on the way to Feb. 25 rally in Times Square. Courtesy of Julia Kadar.

Keeping Up from Abroad

Kadar’s Ukrainian-born parents live in the United States, but her grandparents, aunts, uncles, and cousins still live in Ukraine, near the country’s border with Romania. Some of her cousins are fighting in the war, while other family members have taken in people who fled the eastern part of the country in recent weeks.

“Everyone’s scared. No one thought that this would happen,” she said. “I remember speaking to my grandpa three days before the war happened, and I asked him, ‘Oh, there’s rising tensions between Russia and Ukraine, has anything affected you guys yet?’ He was saying, ‘No, no, everything’s fine,’ and so no one thought that three days later, cities would be bombed.”

Dr. Areta Bojko, who graduated from Fordham College at Rose Hill in 2014, is currently an obstetrics and gynecology resident at Tufts Medical Center in Boston. She said that in the past month, she has struggled balancing her life in the United States with a sense of responsibility to her family in Ukraine.

“We’re not there in Ukraine—we’re here in America, living our lives, and when these things happen, it tears you apart in a way because you want to be there and you want to physically be on the ground supporting, but you still have to go to work every day and show up,” she said. 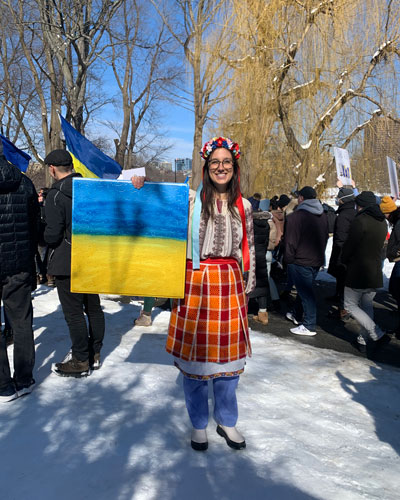 Dr. Areta Bojko at a rally in 2022 to support the people of Ukraine. Courtesy of Areta Bojko.

For Bojko and her family, reports of Ukrainian refugees in Europe evoke a kind of déjà vu.

“My parents would have been born in Ukraine had it not been for a very similar situation during World War II, when their parents had to flee Ukraine,” she said. “They were born in Poland and in Germany, so if you can imagine moms that are fleeing now, that are pregnant from Ukraine, delivering in these countries that they’re fleeing to—that’s exactly what happened to my parents.”

For Fordham men’s basketball player Rostyslav Novitskyi, who was born in Kyiv, the Russian invasion coincided with the lead-up to the team’s participation in the Atlantic 10 tournament.

“It’s painful. It’s very hard,” he told the New York Post after scoring a career-high 10 points in Fordham’s Feb. 28 victory against the University of Massachusetts. “I’m stressed. It’s really hard to see what’s going on with my country.”

Putting the War in Historical Context

Olena Nikolayenko, Ph.D., a professor of political science at Fordham, emphasized the history of Ukraine’s occupation—not only during World War II, when it was invaded by Nazi Germany, but also since 2014, when Russia seized the Crimean Peninsula from Ukraine and occupied eastern parts of the country. 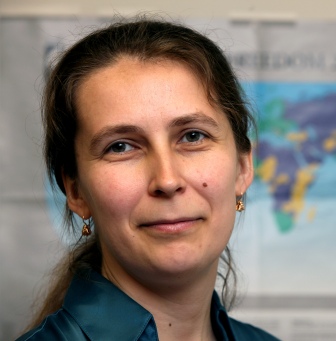 “The war hasn’t just started last month—it’s been going on for the past eight years,” said Nikolayenko, who grew up in Ukraine and has published two books on youth in Eastern Europe, with a particular focus on the role of nonviolent youth movements in advancing democratization.

The international community has refused to recognize the Russian annexation of Crimea, but for years it has viewed the fighting in the Donbas region of eastern Ukraine as a “low-intensity” conflict, Nikolayenko said, and, until recently, continued to do business with Russia as usual. Many European countries still spend millions of dollars to purchase Russian oil and gas, which is used to help finance the war.

“So it was painful to watch for the past eight years, but of course, in recent weeks, with an escalation in violence and the full-scale invasion of Ukraine, the bombardment of residential areas, hundreds and thousands of deaths of civilians, including children—it’s just heartbreaking to watch from afar how the country is under attack,” Nikolayenko said.

Bojko said that the trauma in Ukraine is more intense and widespread now, but it has evoked the same mixture of emotions she felt in spring 2014, when she was a senior at Fordham and the war began. 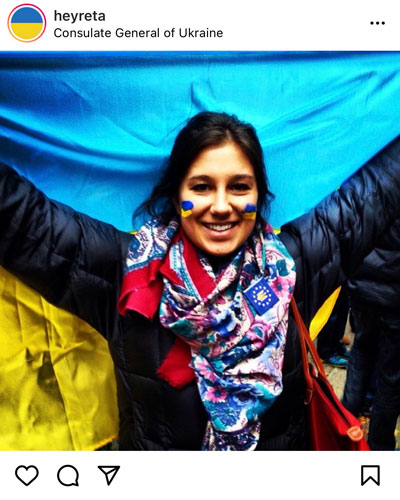 Dr. Areta Bojko in 2014 when she was protested Russia’s invasion of the Crimean Peninsula. Courtesy of Areta Bojko.

“I was looking back at my photos, and I am seeing my Instagram posts from 2014 with a flag—holding up a flag and I’m at a protest, and here it’s happening again,” she said. “I don’t know, it feels helpless, I guess you could say.”

Since the invasion, Bojko has connected with fellow members of the Ukrainian Medical Association of North America, and they’ve been working to gather donations and medical supplies for hospitals in Ukraine.

Kadar said that despite feeling helpless, she’s helped organize prayer vigils and rallies while supporting other efforts in New York City and on campus, including a monthlong donation drive led by Fordham’s chapter of Student Veterans of America to aid those in Ukraine.

“The day the war started, I organized a rally for the next day, and students from Fordham Lincoln Center marched to Times Square—I did not expect so many people to show up,” she said. “It was amazing to see that people actually cared.”

The Fordham men’s basketball team has stood in solidarity with Novitskyi. Players wore the Ukrainian flag on their jerseys for the final few games of the season, and before a home game against the University of Massachusetts in February, they participated in a moment of silence for Ukraine.

“I’m very glad my team and my school supports me,” Novitskyi told the New York Post. “I feel their support and I’m very appreciative of that. … It really feels like they love me and they are trying to help me and make me feel better. It feels like we’re a family.” 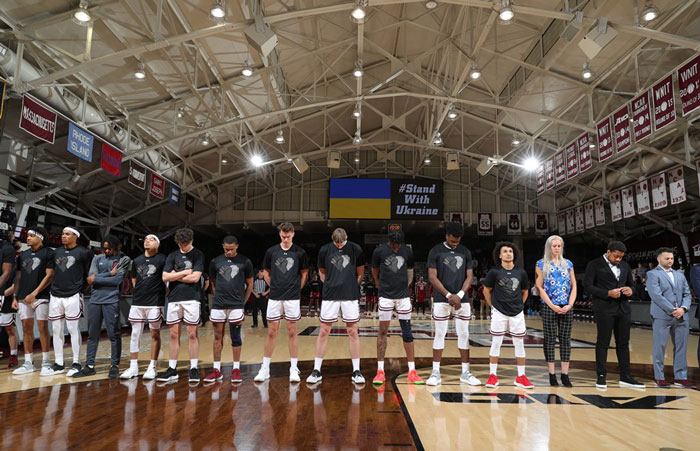 The Fordham men’s basketball team before the Feb. 28 game against UMass. Courtesy of Fordham Athletics.

Nikolayenko said that she’s working with other university professors to provide resources, such as scholarship and fellowship opportunities, to students and academics fleeing Ukraine. She’s also using her platform as a scholar and public intellectual to share her expertise and help people understand the war and its impact. On March 11, for example, she co-organized and chaired a roundtable called “Women and Russia’s War on Ukraine.”

“In every war, usually men are seen on the front lines, but I wanted to highlight the role of women in the war,” both in the military and as activists, she said. “There are a lot of women who chose not to flee and who stayed, and they try to be helpful in any way they can. I’m a university professor—I’m not a military expert, and I can’t fight on the battle ground. But I think many Ukrainian Americans try to work on different fronts, wherever they can put their skills to the best use.”

Keeping the Focus on Ukraine and What Comes Next

One of the best ways to put those skills to use is to keep the conversation on Ukraine at the forefront, especially as the war drags on, Nikolayenko said.

“People can get tired of all the horrific scenes that they see from Ukraine, and they might lose interest in the war crimes that the Russian military commits,” she said. “That’s why it’s important for university professors, journalists, and public intellectuals to speak up and keep Ukraine on the public agenda.”

Kadar said she’s trying to do that through her social media platforms. “I almost feel bad for having to ruin people’s stream of scrolling, but there’s a war going on,” she said, and she wants people to be “mindful” of its impact on the Ukrainian people and to appreciate things that can be taken for granted such as family, shelter, and food.

Bojko said she’s been encouraged by the outpouring of support for Ukraine among people in the U.S. and throughout the world.

“My one worry is that people are going to forget about this issue in a week or two, and I just really hope that we can keep the momentum going with helping Ukraine and not be desensitized to what we see in the news,” she said. “I would really urge people to not forget, and not turn away—really lean into it and try to learn about it.”

Nikolayenko said that even those without close connections to Ukraine should continue to pay attention because she believes the future of democracy is at stake.

“This war is not just about Ukraine’s national independence and its fight for survival,” she said. It’s “indicative of a global trend where we observe a resurgence of authoritarianism across the globe.”