skip to main content
Return to Fordham University
You are at:Home»Fordham Magazine»Features»Fintech Firm, Fordham Football Team Up for Internship Program
A new internship program is available to student-athletes on the Fordham football team, which is scheduled to play an abbreviated season this spring. Photo by Chris Taggart.
Preparing students for a life beyond athletics has always been a main goal for Coach Joe Conlin and the Fordham football program.

So when Glenn Lesko, chief growth officer at DASH Financial Technologies, an agency-only brokerage and technology provider, approached the team about putting together an internship program for Fordham football players, Conlin said it was a natural fit.

“It’s our job to develop them as football players, but it’s also our job to help them as best we can achieve future success,” Conlin said. “In the recruiting process, when I sit down in a living room with parents or guardians of student-athletes, I make a promise to them that I’m going to work as hard as I can to create those opportunities for them.”

Conlin said the partnership with DASH, which provides participating Fordham football players with a paid internship, is an example of that. And DASH is just one of more than 3,500 organizations in Fordham’s internship network, according to the Office of Career Services.

For Lesko, the partnership with Fordham is a way to recruit talented interns while honoring his late father, William S. Lesko, M.D., a 1958 Fordham College at Rose Hill graduate.

“He went [to Fordham]to play football, but they canceled the program [in 1954, his first year],” Lesko said. “But my dad also had varied interests. He wanted to go to medical school; he was a naturalist and loved the [New York] Botanical Garden and bird-watching and all these other things. And so he went to Fordham [even though]he didn’t get the opportunity to play football.” 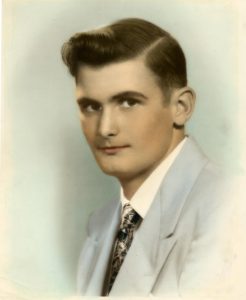 After graduating from Fordham, William Lesko earned a medical degree from Seton Hall University and in 1968, he founded North Jersey Eye Associates in Clifton, N.J., where he practiced ophthalmology for nearly 50 years. He died in early 2019, and shortly after, Glenn Lesko learned from one of his father’s former colleagues that a few Fordham football student-athletes were looking for internships. Lesko said he reviewed their resumes and had a thought: “Some of our best guys went to Fordham. We have three really strong performers at DASH that are Fordham alums.”

Then the idea came together—honor his father’s love for his alma mater by providing Fordham student-athletes with opportunities through the Dr. William S. Lesko Internship program.

“[My dad] always thought about the ideal student-athlete as being very positive and productive, people who can handle a high academic workload and also go out there and do all the work that’s required on the fields and also maintain other interests,” Lesko said. “People like that really have a great chance for success.”

The partnership, which offers paid internships, is available to high-achieving players who meet certain criteria, including “class performance, athletic commitment, and well roundedness.”

Conlin said that Fordham football players develop a range of skills, on and off the field, that serve them well in internships and careers.

“Our guys have to [learn]time management, they handle adverse situations [and]… obviously they work in a team every day,” he said. “The 11 guys in football have to function together in order to have success, and it’s a cliché, but it’s true that if one or two guys aren’t doing what they need to do, something very, very bad can happen. And that’s obviously a microcosm of the real world.”

Lesko noted that teamwork and discipline are two keys for success that many student-athletes already have.

“I found that student-athletes are really great in teamwork, goal-driven environments—they understand team goals, they understand how you can collaborate, and also be super focused on the goal,” he said. “And, obviously, discipline—you’re not going to get through a great school like Fordham and also put all the hours that are required into your sport without being a disciplined, hard worker.”

One Fordham football player, Jack Gildea, GABELLI ’21, has participated in the internship program, which began in 2020, and current DASH employees and Fordham alumni said that they are excited for the program to expand.

Hunter McCarthy, FCRH ’16, a director at DASH, said that Fordham’s core curriculum and its emphasis on the tools a liberal arts education can provide helped him develop critical thinking skills that have served him well in the fast-paced financial technology industry.

“I think just sort of the breadth of the education—all the different subjects that you learn about, you become a jack of all trades,” said McCarthy, who majored in international political economy. “Just being able to learn a lot of different fields is something that has been useful for me at DASH. When you work at a smaller company, you’re put into different roles, and it’s up to you to wear a lot of different hats.”

McCarthy said that he’s noticed some common traits among Fordham students and alumni he has worked with at DASH.

“They’re more than willing to help—you get put in a lot of different group projects, but you’re also asked to work independently. So you have to have different skill sets for different times,” he said. “And I think they’ve more than demonstrated that they have those skill sets. Whatever scenario might come up, whatever we might need—you’re not going to get anything but their best effort.”

Eugene Kearns, FCRH ’99, a managing director at DASH, said that blend of adaptability and a strong work ethic is especially important during this time when many people are working remotely.

“I think in a virtual experience, you’re going to need to be self-motivated, you’re going to have to be able to be a problem solver, and those skill sets are going to be so important,” he said. “I think Fordham being a city university, it becomes more natural.”

In addition to fostering partnerships with companies, like the one with DASH, Fordham’s Office of Career Services has been working with the alumni relations office to connect students and recent graduates with internship and career opportunities through the Rams Helping Rams program and other initiatives. To learn more, visit the career services section of the Fordham website.