skip to main content
Return to Fordham University
You are at:Home»Fordham Magazine»Books»Hot Off the Press: Peter Quinn’s Noir-Tinged Historical Mysteries

New York Times columnist Dan Barry once quipped that if he had written Peter Quinn’s debut novel, Banished Children of Eve, in which Quinn “unsparingly conjured the Draft Riots of 1863,” vividly summoning a distant time in New York City “from the sweat of his research and the magic of his imagination,” he would have stopped writing altogether.

“I would’ve thought, well, I’ve conquered literature, so I might as well take on another art form, perhaps interpretive dance. But Peter kept writing,” he said. “Thank God for dance.”

“I love Raymond Chandler,” Quinn told this magazine in 2017, but “I always felt that his character Philip Marlowe, he’s really Irish American with his hard-edged blend of cynicism and idealism, and he belongs in New York. So that was the inspiration for Fintan Dunne.”

Set in New York and Berlin during the late 1930s, Hour of the Cat (2005) starts with a homicide investigation—the murder of a nurse, an innocent man on death row—but grows to include the eugenics movement and the lead-up to the systematized murder of World War II.

In The Man Who Never Returned (2010), it’s the mid-1950s, and a retired Dunne is lured by a media mogul into investigating the still-unsolved 1930 disappearance of Judge Joseph Force Crater.

In Dry Bones (2013), Dunne comes face to face with both the Holocaust, through his involvement with an ill-fated Office of Strategic Services rescue mission in Slovakia in 1945, and the moral murk of Cold War espionage on the eve of the Cuban revolution.

Throughout the trilogy, Quinn, who earned a master’s degree in history at Fordham, deftly turns historical themes into suspenseful, literary fiction. As Pulitzer Prize-winning novelist William Kennedy once said, Quinn “takes history by the throat and makes it confess,” invariably aiming his writing at questions that matter. 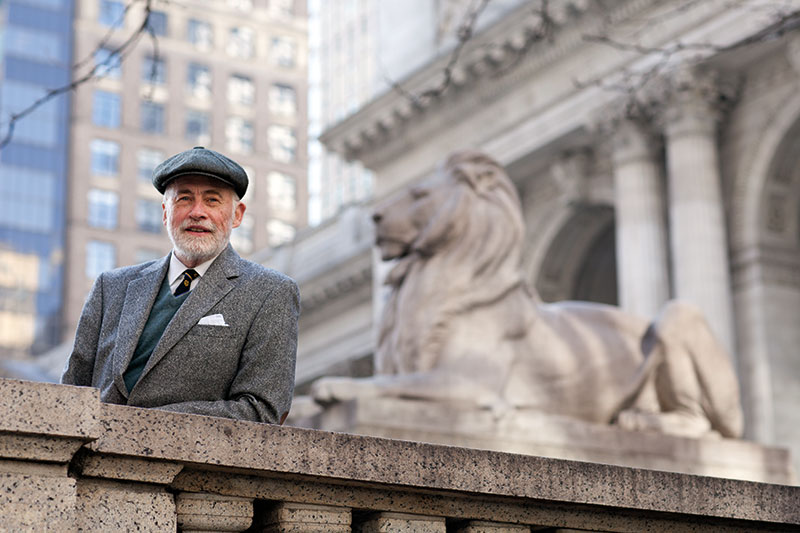 Novelist and Fordham graduate Peter Quinn on the steps of the New York Public Library, February 2017. Photo by Michael Falco