skip to main content
Return to Fordham University
You are at:Home»Fordham Magazine»For the Love of Service: Whitney Rog and Justin Lucas
Above: Whitney Rog and her husband, Justin Lucas, recently traveled to Zambia, where they helped residents establish a small school for children in a rural village in Livingstone. Photos courtesy of Whitney Rog
Going back to school in the fall can bring mixed feelings—excitement, jitters, end-of-summer blues. But for Whitney Rog, Psy.D., FCRH ’09, and Justin Lucas, GABELLI ’08, memories of returning to Rose Hill for the fall 2007 semester are filled with romance.

“We bonded over a love of science,” Rog says of the night they met at a gathering of fellow resident assistants. “There was a magnetic force between us after that first chat, and we never left each other’s side.”

They spent hours together that fall, setting up bulletin boards in Martyrs’ Court and Walsh Hall, walking the campus between classes, and stopping for marathon chat sessions, including one in front of Collins Hall that lasted nearly eight hours.

“Had we not been RAs, we would not have crossed paths,” Rog says. “We learned that we have different interests and strengths, but we use those to be a strong team.”

The couple also developed a lasting bond with a Fordham Jesuit—Joseph A. Currie, S.J., JES ’61, GSAS ’63—who, Rog says, gave them “meaningful trainings on social justice.”

Father Currie, who died last March at the age of 80, was Fordham’s associate vice president for mission and ministry at the time. Lucas got to know him when the two lived in Tierney Hall, where Lucas was an RA, and Rog was impressed by Father Currie’s patience and understanding when she came to him with questions about her faith. “We both love this man,” she says they soon realized. 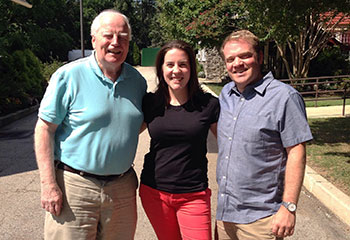 Rog and Lucas visited Father Currie at Saint Joseph’s University in Philadelphia last September. They keep a framed print of this photo in their home to remember their late friend and mentor.

Like their love for each other, their friendship with Father Currie would continue beyond graduation and influence their lives in many ways.

Lucas graduated in 2008 with a degree in finance and began working in New York City. The following year, after Rog completed her degree in psychology, the two moved to Queens, where she enrolled in a doctoral program in psychology at St. John’s University. But each year, as summer drew to a close, they returned to Rose Hill for a romantic picnic on Eddies Parade.

Lucas proposed to Rog in Central Park on All Saints’ Day, 2010. In homage to the back-to-school season in which they met, the two were married on August 27, 2011, with Father Currie presiding at a ceremony in Buffalo, where Rog grew up.

“Father Currie continued to be a close friend and mentor to both of us,” Rog says, noting that every summer he would host her and Lucas at the Jesuit retreat house in Wernersville, Pennsylvania. “We were grateful to have gotten even more time with him when he moved to Philly shortly after we did.”

Rog, who earned her doctorate in 2014, is now a pediatric psychologist at Children’s Hospital of Philadelphia, where she specializes in treating children with pain disorders, and Lucas is a financial services technologist at TD Bank. The couple also makes time for service work. “We want to focus on the life Fordham and its culture inspired,” says Lucas, who is a regular volunteer with Habitat for Humanity in Philadelphia and recently traveled to China to work on a homebuilding project. 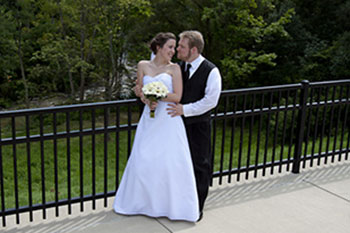 This past summer, he and Rog trekked to Zambia to help residents in a rural village establish a small school for children in what Rog described as a “repurposed chicken coop.”

“We hope to return one day and continue to provide educational and psychosocial services, along with some infrastructure improvements,” she says.

Closer to home, Rog and Lucas are house parents at the Milton Hershey School, a private, cost-free boarding school in Hershey, Pennsylvania, that serves more than 2,000 children who meet criteria in financial need and potential to learn. Rog and Lucas spend every other weekend living with a group of middle-school girls on the campus.

It’s a familiar role for the couple who met as Fordham RAs. They find themselves using techniques they learned on campus, like suggesting “ice breakers” to get the girls talking and more engaged with each other.

“We offer a lot to these kids, being an adult guiding force in their lives,” Rog says. “But we are also learning so much from them.”