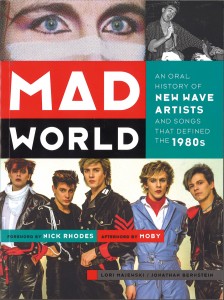 To Lori Majewski, new wave isn’t just a favorite musical style; it’s a passion that’s driven her professional career and inspired her to co-write Mad World, an oral history of 36 of the genre’s most memorable songs. In June, Amazon named the book one of 2014’s best so far.

“I wanted to be a music journalist because I wanted to meet my favorite bands,” says Majewski, whose love of artists like Depeche Mode, New Order, and especially Duran Duran dates back to her childhood in Weehawken, New Jersey, where she’d go through a can of hairspray a week to achieve the look of the era. She chose to attend Fordham because its Lincoln Center campus “made it easy for me to go to class during the day, and then go to the hotels where my favorite bands were staying and talk to them.” (She once saw Bono getting out of a cab. He signed her school binder.)

While at Fordham, Majewski interviewed bands for the student newspaper, The Observer, while also running a Duran Duran fanzine with more than 5,000 subscribers. That experience led her to a professional career in magazines, and she’d go on to hold the top job at Teen People and serve as an executive editor at Us Weekly, Entertainment Weekly, and YM.

But in 2011, Majewski decided to get out of the magazine business and focus primarily on an idea conceived with former Spin colleague Jonathan Bernstein. The two had read an interview with Spandau Ballet’s Gary Kemp in which he revealed that the lyrics to their hit song “True” were inspired by Vladimir Nabokov’s novel Lolita. Says Majewski: “We were like, what if we did an entire book with nuggets like this?”

The result is Mad World, a history of the big-haired, synthesizer-loving new wave artists that provided the soundtrack of the 1980s. “I got my favorite artists to talk about the songs that mean the most to them, and I get to share it with so many like-minded people,” says Majewski. Indeed, there’s an audience that still adores what Majewski calls “the new classics.” At a September event at Brooklyn’s Rough Trade record store, some 50 fans turned up to watch Majewski interview Ultravox’s Midge Ure.

“It’s the first book that gives credibility to this era,” says Majewski, who is interested in working with Bernstein on a sequel to Mad World. She also wants to tackle a book on the late ’90s teen-pop explosion. But whichever era she’s chronicling, Majewski does it all with the enthusiasm of a fan, not the dagger of a critic. “I’m kind of a fan who made it,” she says.