skip to main content
Return to Fordham University
You are at:Home»Fordham Magazine»Long Island Teacher, Brewery Owner Draws on Fordham Education for Inspiration
Photo courtesy of Bill Kiernan
When Bill Kiernan took stock of the national conversation on racial justice following the death of George Floyd and considered how to help his high school students do the same, he thought back nearly two decades to his time at Fordham. Two classes in particular—the Black Prison Experience and the Black Church—had opened him up to new perspectives.

“I found all these histories that I had never read in high school,” Kiernan said of the classes, which were taught by Mark L. Chapman, Ph.D., associate professor and associate chair of Fordham’s Department of African and African American Studies.

Kiernan reached out to Chapman and invited him, along with two other Fordham professors, Mark Naison, Ph.D., and Claude Mangum, Ph.D., to visit the Long Island brewery he co-owns. The group got together at Sand City Brewing Co. last June. 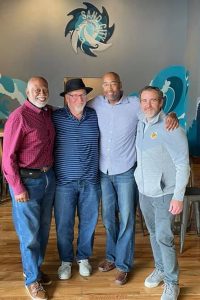 “I hadn’t seen these professors in [almost]  20 years,” Kiernan said. “It was such a positive reunion. That whole notion of caring about the individual, caring about society, trying to promote justice in a pragmatic way, those were things that the professors really inspired in me.”

In a Facebook post, Naison said visiting the brewery and hearing about Kiernan’s work as a teacher made him proud of Fordham.

“Spending time with [this]  remarkable grad … gave me a deep appreciation of my faculty colleagues and everyone else on campus who inspired [his]  commitment to making the world a better place,” Naison wrote.

After graduating from Fordham College at Rose Hill in 2002 with a bachelor’s degree in philosophy and religious studies, Kiernan worked in the contracts department at Random House. He often talked about books the company was publishing with one his former teachers, the chair of the English department at his high school alma mater, St. Anthony’s in South Huntington, New York. When a half-year teaching job opened up at the school in 2005, the chair encouraged Kiernan to apply. He got the job, went on to earn a master’s degree in education from Molloy College and a master’s in educational leadership from Long Island University, and now he’s an Advanced Placement literature and composition teacher at St. Anthony’s.

Meanwhile, in the early 2010s, a friend named Kevin Sihler approached Kiernan with the idea of opening up a brewery in Northport. After several years of planning, they opened Sand City in 2015, and this year, they launched a location in Lindenhurst, on Long Island’s South Shore, with Kiernan focusing on the day-to-day business operations of the company.

While committing to two careers can require long hours, Kiernan said that his love for teaching made it an easy decision for him to keep working at St. Anthony’s as the brewery grew. He also said that his Fordham education, aside from influencing his teaching, has had a big impact on his approach as a business owner.

“The Fordham education really significantly impacted me in a couple of different dimensions, one being the spiritual, [inspiring a]  concern for the dignity of the individual,” he said. “As a teacher, that goes without saying. But as an employer, when I think about my employees and their health and well-being and the goal of developing them as individuals, I think so much of that goes back to the way we were cultivated at Fordham.”

He also said that the critical thinking skills he developed as a philosophy major have helped him run the brewery.

“The types of conversations you have, the types of logic problems you solve, all these things prepared me unknowingly to confront problems in the world and try and figure out solutions to them in my business,” Kiernan said.

That combination of a pragmatic liberal arts education and the spiritual and political value of classes like the ones he took with Chapman had such a positive impact on Kiernan that when his high school students are looking at colleges, he heartily encourages them to apply to his alma mater. He also said that living in a vibrant Bronx community as an undergraduate provided him with an “unspoken curriculum of how to actually function in society.”

“When I hear students want to go to Fordham, I’m like, ‘There’s no question in my mind that you should.’”