This year’s Block Party reunion, held virtually on June 16 and 17, gave alumni of Fordham’s Lincoln Center-based schools and programs a chance to connect with former classmates and celebrate the things that make Fordham’s Manhattan campus a home in the heart of New York—and a place where students learn how to serve that city.

Organized by the Office of Alumni Relations, the reunion featured virtual panels on Broadway’s return, Juneteenth, alumni leadership in education, and a commitment to centering women’s voices, as well as a student performance showcase, a guided wellness session, and a look at little-known histories of New York City and Fordham’s Lincoln Center campus—all of which can be viewed on demand by those who registered.

The History, and Future, of Juneteenth

Rafael Zapata, Fordham’s chief diversity officer, moderated a panel discussion on the history and contemporary significance of Juneteenth on June 17, the same day that President Biden signed legislation making it a federal holiday. Juneteenth marks the date—June 19, 1865—when the abolition of slavery was completed with the arrival of Union troops at Galveston, Texas, more than two years after the Emancipation Proclamation. 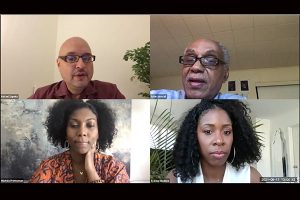 The panelists—Fordham professors Tyesha Maddox, Ph.D., and Michele Prettyman, Ph.D., along with Tyler Stovall, Ph.D., dean of the Graduate School of Arts and Sciences, discussed the long road toward liberation both before and after the Proclamation, including the ways that formerly enslaved people used mutual aid and creative pursuits to build community, and how post-emancipation practices like sharecropping kept African Americans “under the thumb of their former masters,” as Stovall put it.

Prettyman, a scholar of African American cinema and visual and popular culture in the Fordham communication and media studies department, noted the wave of Black elected officials in the U.S. following the Civil War as well as the growth of African American communities—like the one ravaged during the Tulsa Race Massacre of 1921.

“Tulsa is … the most striking embodiment of what happens as a result of this incredible wave of business and leadership and education,” Prettyman said. At the same time, “even killing people in a very literal sense did not destroy this animating impulse of Black life that comes out of these moments of just real despair and real darkness. … If we keep [the idea of freedom]in our poetry and our art and our music and our culture, it becomes something that is owned and shared, and not just something that’s commemorated on single days or in single moments.”

While acknowledging the importance of recognizing Juneteenth, Stovall also drew attention to the disconnect between the introduction of the national holiday and the fact several states are moving to limit voting rights in ways that could disproportionately affect Black voters. “There’s a real lack of respect for the very idea of democracy,” he said.

Stovall ended the event by turning his computer to show a lit lamp that was owned by his great-great-grandmother, who was born a slave.

“The lamp still shines,” he said. “Our history still shines. And I think Juneteenth represents the fact that our experience as a whole still shines, down to the present day, and will shine in the future.”

Looking Ahead to Broadway’s Reopening

The Fordham Theatre program has produced many successful artists over the years, from actors, writers, and directors to stage managers and producers. And like their peers, Fordham graduates and faculty in the industry have faced a challenging year-plus, with theaters going dark during the pandemic. 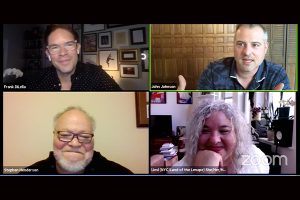 During a June 16 panel moderated by Frank DiLella, FCLC ’06, Emmy Award-winning host of Spectrum News NY1’s On Stage and introduced by Fordham College at Lincoln Center Dean Laura Auricchio, Ph.D., who said she “grew up going to the theater like other kids go to the playground”—three theater leaders with Fordham connections discussed their recent experiences and spoke with optimism about Broadway’s reopening.

“Knowing that by the fall, the majority of theaters will be open, it’s a really thrilling time,” said John Johnson, FCLC ’02, a Tony Award-winning producer whose recent Broadway executive producing credits include Who’s Afraid of Virginia Woolf?, West Side Story, and To Kill A Mockingbird.

Stephen McKinley Henderson, the renowned stage and screen actor who held the Denzel Washington Endowed Chair in Theatre at Fordham in 2015, echoed that excitement, noting that he learned from legendary playwright August Wilson “how much theater is a major part of the culture,” one that can unite audience members and provide much-needed comfort in times of struggle. “It’s very important that we know that some of our essential workers”—theater professionals—“have been out of work,” he said.

And while the panelists expressed a great deal of excitement about safely getting back in front of audiences, they also spoke about the need to create a healthier, more just environment for performers, noting issues like draining rehearsal schedules and unaddressed problems around racial equity and harassment.

“For us to continue, we need to rigorously reexamine our field and figure out how we’re going to change it for the better,” said Liesl Tommy, who held the Denzel Washington Chair last fall and in 2016 became the first woman of color to receive a Tony nomination as best director, for Eclipsed. “We cannot skip the step of interrogating it with love.”

That love for theater—and the desire to improve the quality of life for those who work in it—was evident when the panelists described the small moments and details they are most looking forward to in the fall. While Henderson said it will be that initial approach to the stage door person waiting outside the theater and Tommy mentioned the shared experience of being in an audience, Johnson elicited knowing nods from his peers with his response.

“House to half,” he said, referring to the time between when the house opens and the half hour before the curtain rises. “The anticipation of the show about the begin … I cannot wait for it.”

The marginalization of people of color, asylum seekers, and immigrants isn’t new, but COVID-19 has highlighted the stark conditions female members of these vulnerable populations face. That was the topic of discussion during “Centering Women’s Voices: An Approach for Claiming Rights and Justice,” a Graduate School of Social Service (GSS) reunion event.

“The events and the experiences of the past year have altered our perspectives, and certainly it’s changed the way we connect, the way we teach, the way we learn, the way we work,” McPhee said during a brief introduction. “I think owning our individual and collective responsibility for the health and welfare of our fellow citizens, and frankly the future of our country, has never been more critical.”

Alonzo and Popescu shared their research about the challenges faced by women who experience forced migration, with particular focus on asylum seekers, and how those challenges have been exacerbated by the pandemic.

Alonzo said not only have the women she and Popescu worked with been incredibly motivated to support and build community, they’ve also “expressed to us the array of factors that impact their ability to access health and mental health care,” from language and cultural barriers to fear of not being accepted. The two professors also shared videos featuring three women’s first-person accounts of what it’s like to search for housing and apply for asylum.

Azhar presented a snapshot of her research examining intersectional stereotypes and violence of Asian American and Pacific Islander (AAPI) women. Analyzing more than 3,000 tweets with the hashtag #ThisIs2016, which was started five years ago to highlight moments of racial harassment experienced by AAPI people, Azhar and her colleagues identified six themes regarding race, gender, and sexuality, often revolving around demeanor, physicality, and colonialism. Azhar added that highlighting “what women were saying to themselves” and adopting an active, participatory approach is key for meaningful social work intervention.

Though their specific research areas differed, all the speakers stressed the need for compassionate, comprehensive care that meets women where they are, factoring cultural traditions and means into treatment plans, and refraining from generalized judgment and stereotypes that can deter patients from seeking help.

On Thursday evening, the Graduate School of Education honored Lester Young, Ed.D., GSE ’78, with its Distinguished Contributions to Education Award. 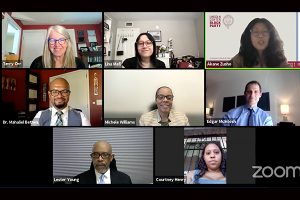 Young, who in January became the first Black chancellor of the New York State Board of Regents, joined members of the Fordham community for a conversation about advancing diversity, equity, and inclusion (DEI) in New York schools.

“We are in what I’ve described as a very incredible moral moment. This is a moment that cries out for moral, courageous leadership,” he said.

He spoke about a framework that the Board of Regents drafted in April, calling on schools throughout the state to “adopt and implement policies that take a comprehensive approach and consider the entirety of the schooling process,” in order to advance DEI.

Courtney Henry, who graduated from the school’s online teaching program in childhood special education in May, asked Young how he would respond to those with concerns “that DEI work is displacing foundational learning in other areas.”

“We believe that DE&I is really about how we conduct our business,” Young told Henry. “It is not the what, it’s the how. … If you look at who has access to rigorous content and instructional opportunities, you will see that there is no equitable distribution of that now.”

He also said one of the state’s goals is to ensure “that outcomes are not associated with who young people are, where they happen to live, what their families do.”

Mahaliel Bethea, Ed.D., GSE ’20, a graduate of GSE’s educational leadership and administration program, is the director of grant-funded programs at New York State My Brother’s Keeper, part of an initiative started under President Obama “to address persistent opportunity gaps faced by boys and young men of color and ensure that all young people can reach their full potential.” He asked Young what advice he would give to school district leaders who are at the beginning stages of this work.

“The first thing I would say to new leaders is to recognize the importance of partnerships and networking,” Young said. “The next piece: our business is the business of learning. It’s extremely important our leaders are on top of their game. They need to be on top of the science of learning and childhood development.”

Young also spoke to the way in which the COVID-19 pandemic has highlighted just how large a role schools play in towns and cities across the state and the country.

“If we’ve learned anything from the pandemic,” he said, “it’s the importance of the central location of the school as the nucleus in the community.”

In a virtual forum kicking off the Block Party events, the deans of the colleges and schools represented at Lincoln Center spoke about upcoming initiatives: at the Gabelli School of Business, a new student-managed investment fund focused on environmental, social, and governance factors; at the Graduate School of Social Service, a new federal grant that will help with building students’ behavioral health skills; at Fordham College at Lincoln Center, a new University-funded Cultural Engagement Internships Program that is providing students with paid internships at city nonprofits; and at the School of Professional and Continuing Studies, a Good Neighbor Initiative to make the school more financially accessible for residents of the Fordham’s surrounding neighborhoods, among other initiatives.

The deans spoke of how the Fordham community has pulled together and doubled down on its mission during the pandemic. Referring to new initiatives such as providing telehealth therapy to underserved populations in the Bronx, Akane Zusho, Ph.D., interim dean of the Graduate School of Education, said, “In many ways, I feel like as hard as it’s been, we’ve actually been more active in the community than, I think, in some ways we’ve ever been.”