skip to main content
Return to Fordham University
You are at:Home»Fordham Magazine»‘Like Repeating My History’: A Story of Scholarship Giving
James P. Flaherty at the Fordham Founder’s Dinner in 2011, where he was presented with the Founder’s Award. Photo by Chris Taggart
One day in the mid-1960s, when he was a student in high school, James Flaherty walked in the door of his Brooklyn home and found an envelope from Fordham waiting. Inside was jubilation—“I opened it, and I probably yelled or shouted or something,” he said. To him, Fordham was “what a university was supposed to be. It was the only place I wanted to go.”

His acceptance was especially joyous for his parents, neither of whom had been able to go to college. Later, when he brought them to the Rose Hill campus, “you could see how proud they were that I was going there. And I felt exactly the same way,” he said. “So I developed a love for Fordham that never left me.”

That love stayed in the background during the busy decades following his 1969 graduation from Fordham College at Rose Hill as an English major. Within two years he was a newly married father of twins. He went into banking, earning an MBA from Pace University at night, and built a successful executive career at firms including American Express; Black Rock Capital, which he co-founded; and Cannon Capital Ltd.

As part of its fundraising campaign, Cura Personalis | For Every Fordham Student, the University is publishing occasional articles with the theme of “Why I Give.”
Over the past few decades, he has come back to Fordham in a number of roles: He is a longtime trustee and former member of the President’s Council who has often visited Fordham classrooms and spoken at student-focused University events. He was an advisory board member for Fordham’s programs in London, where he and his family lived for 20 years. He is a 2011 recipient of the Fordham Founder’s Award, and he is also a Fordham parent—of the four children born to him and his late wife, Jane M. Flaherty, two are Fordham graduates.

He is also a generous donor to the University. Among their other gifts to Fordham, he and Jane established two scholarship funds: one named for Roy E. Haviland, GABELLI ’69, a Navy pilot and classmate of Jim’s who was killed in a midair collision off the coast of North Vietnam in 1973, and one named for Jane Flaherty, to which he is making a new contribution. Jim serves on the committee for Fordham’s current campaign, Cura Personalis | For Every Fordham Student, which seeks to raise $350 million for priorities including access and affordability.

Those were always key priorities for the Flahertys—as an undergraduate, Jim faced financial challenges that nearly derailed his Fordham education. His own struggles informed the Flahertys’ commitment to giving scholarship support to students who, by now, number in the dozens.

Who is someone at Fordham who made a difference for you?
Father George McMahon [former dean of Fordham College at Rose Hill and namesake of McMahon Hall on the Lincoln Center campus]probably had the biggest impact on me when I met with him in junior year. I had ripped my knee up playing baseball at Fordham and had withdrawn from school for a semester, which was exciting because it meant I lost all my scholarships. Then my father had a stroke when I was beginning my junior year. I had to really juggle things around—because I didn’t have much money and because one parent was no longer able to work, I went to work on Wall Street, at the Bank of New York, running a collating machine that processed mutual fund statements.

And so I had to go see Father McMahon to talk about things, and he did me a world of good. I didn’t think I was going to be able to stay at the University, but he did all sorts of things for me that let me hold on to my scholarships, and he also let me fit classes into my work schedule. He went out of his way to make sure that I stayed in school, and I wound up, fortunately, graduating on time.

How did your undergraduate experience impact your giving?
My last two years at Fordham were a bit of a blur—I worked from midnight to eight o’clock in the morning, came up to Rose Hill, did my classes, went home to Brooklyn, slept for four hours, and then went back to Wall Street and worked from midnight until eight o’clock again. So it wasn’t exactly the kind of educational experience I think you’d want anybody to have. I don’t want anybody to ever have to go to Fordham the way I did.

My wife, Jane, also wanted us to support Fordham, for two reasons: Neither she nor any of her four brothers got to go to college, because their parents couldn’t afford for any of them to go. Also, she watched how hard it was for me, although she was extraordinarily supportive of what I was trying to do. 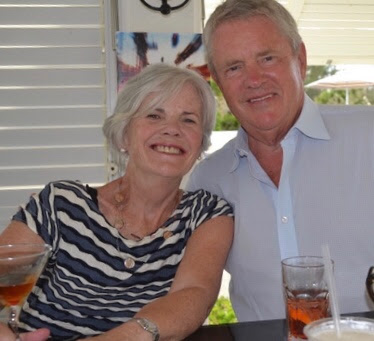 Jane and Jim Flaherty in Bermuda in 2015. Photo courtesy of James P. Flaherty

You once said she loved Fordham even more than you did. Can you elaborate?
When I was at Fordham, she was with me up on the campus every weekend, going to basketball games, all sorts of things. She had a college experience in a vicarious way, and she just loved every minute of it. In the years after I graduated, she was at Fordham fairly often with me, and then when we moved back from England, we were busy with Fordham things quite a bit.

By the way, when I was asked to go on the Board of Trustees by [Joseph M. McShane, S.J., president of Fordham], I said no, for a variety of reasons. Well, if you know Father McShane, you know he doesn’t give up. So he kept asking—I’m on the phone with him, in a car with Jane, having just landed in London, and I’m saying no, and there are pauses, and Jane finally said, “What’s this all about? Give me the phone.” So I handed her the phone and Father said he wanted me to go on the board. “Oh, OK,” she said. “He’ll do that.” End of story!

What was it like meeting your scholarship recipients at Fordham’s annual Scholarship Donors and Recipients Reception?
Our scholarship recipients would show up, and my wife would sit down with them all around a table. She treated them like their mother—urging them to eat something, asking how things were going for them. Like me, they were enthralled by her. Some of them would tell her they would never have been able to come to Fordham if they didn’t have the scholarship that she gave them. In some respects, it was a little bit like repeating my history. There was one young man whose father had died two months after his acceptance to Fordham. He was a policeman who had been killed. And it was a real question, whether this young man was going to be able to attend. And so every year for four years, he’d be the first one of the scholarship recipients in the room so he could have a private conversation with Jane. When he was a senior, his mother came, and that was a pretty tearful meeting. But yes, we had several students thank us.

Roy Haviland’s sister, Dorene Prinzo, still comes to the scholarship reception every year. He was my best friend at Fordham. Who, by the way, just to make it clear, my wife had a terrible crush on before she even agreed to talk to me.

Do you have advice for today’s graduates?
I’ve told students that they had better like what they do for a living and like the people they do it with. It would be better to quit their job than to do a job they hated, because it would become obvious that they hated what they were doing, and that kind of spills over as you go look for different jobs. If you’re doing something you don’t like to do, sooner or later, you’re going to do a bad job at it.

Is there a book that had a lasting influence on you?
There are two books, and the first is The Power and the Glory. It’s a novel by Graham Greene about a Catholic priest during the repression of the church in Mexico in the 1930s, and it shows what happens if you have the intestinal fortitude to do the right things. The other book is The Wall, by John Hersey, and it’s about the ghetto in Warsaw, Poland, in World War II, and how the Poles had to outwit the Nazis simply to survive. I went to Warsaw with my oldest son, and we saw the train station where they made the Jews get on the train to the concentration camps. He still talks about that. The Wall has stuck with me forever. I have a copy of it on my nightstand.

What are you optimistic about?
I am an optimist because America’s still far and away the greatest nation in the world. I think Americans will survive and thrive on the opportunities that America creates time and time again for its citizens. I am a believer in the movement toward diversity that’s underway, and Fordham’s history is all about diversity and opportunity—we were created in 1841 because Catholics couldn’t go to university.

What’s the best piece of advice you ever received?
My Irish Catholic mother, who doted on her only child, said, “You should marry that girl as soon as she’ll have you,” referring to Jane. Fundamentally, the most important decision I ever made was to marry my wife, and I did that in part because my mother told me to.

Jane M. Flaherty died peacefully on February 4, 2019, after an illness. On December 16, 2019, the University posthumously awarded her the Fordham Founder’s Award, noting, among other things, her dedication to the cause of Catholic education, her generosity of spirit, and the opportunities she created for the students of Fordham.

To inquire about supporting scholarships and financial aid or another area of the University, please contact Michael Boyd, senior associate vice president for development and university relations, at 212-636-6525 or [email protected]. Learn more about Cura Personalis | For Every Fordham Student, a campaign to reinvest in every aspect of the Fordham student experience.