skip to main content
Return to Fordham University
You are at:Home»Fordham Magazine»Featured Image»Like Grandfather, Like Father, Like Son: Newly Commissioned Army Officer Extends Family Legacy of Military Service
Lt. Col. Michael Hoblin Sr. (above left) and his wife, Rowena, met as undergraduates at Fordham in the late 1980s. They returned to Rose Hill on May 15, when their son Michael (right) was commissioned a second lieutenant in the U.S. Army. Photo by Dana Maxson
Michael Hoblin Jr. joined Fordham’s Army ROTC program for a simple reason.

“My father and my grandfather—the way they interact with people, the way people look up to them. Their Fordham and military training made them that way,” he said. “Since kindergarten, I knew I wanted to follow in their footsteps.”

Last spring, Hoblin did just that. He earned a bachelor’s degree in computer and information science and was commissioned a second lieutenant in the U.S. Army.

His parents joined him for the May 15 commissioning ceremony in the University Church. His mother, Rowena Hoblin, GABELLI ’91, is the director of religious education at the Church of St. Augustine in New City, New York, and his father is a lieutenant colonel in the New York Army National Guard.

“I was commissioned in the church twenty-four years ago, and my dad was with me that day, so it brought back a lot of memories,” said Michael Hoblin Sr., FCRH ’91, GSAS ’03, who wore his late father’s 1951 Fordham class ring for the occasion. 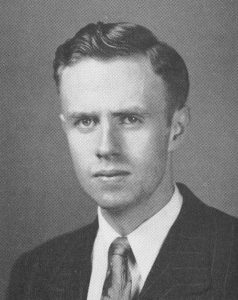 Philip Hoblin, in a photo taken from the 1951 Fordham Maroon yearbook

The Hoblin family’s long association with Fordham ROTC dates back to the late 1940s, when Philip J. Hoblin, FCRH ’51, LAW ’57, joined the Air Force ROTC program at the University. He was among the first members of the Fordham chapter of the Pershing Rifles, a national military honor society and precision-drill team open to ROTC cadets and other undergraduates throughout the country.

“All three of us were members of Company D-8, the Fordham chapter of the Pershing Rifles,” said Hoblin Sr., who was professor of military science at Fordham from 2004 to 2006. “My dad was very proud of his and our membership.”

After graduating from Fordham in 1951, Philip Hoblin served in the Korean War for two years before returning to Fordham, where he earned a law degree in 1957. He built a civilian career, rising to general counsel at Shearson Lehman Hutton. And he continued serving in the Air Force Reserves, where he was a judge advocate general officer, before retiring as a colonel in 1981. He later became a trustee of his hometown of Suffern, New York.

“He was such an influential person in the community. He just lived to help people,” said his grandson Michael, who delivered a eulogy at his grandfather’s funeral Mass in January 2013.

Philip Hoblin believed the military leadership training and Jesuit education he received at Fordham were complementary—a conviction he passed on to his son and grandson.

“It’s about critical thinking,” said Michael Hoblin Sr., deputy commander of the 27th infantry brigade headquartered in Syracuse, New York. “My dad always told me, when you receive a Jesuit education, you learn how to write, you learn how to read, and you learn how to think. Somebody can train you in business, but you have to have those traits.

“The Army looks at it the same way for senior leaders,” he added. “You want to make sure officers are critical thinkers, that they can sort through ill-structured problems and come up with solutions—or at least better outcomes, because the world will never be perfect.”

Hoblin, who earned a master’s degree in strategic studies at the Military War College last year, has handled his share of complicated problems. Seven years ago, during a tour of duty in Afghanistan, he led a civil-military task force that helped build several dozen schools throughout the country. Closer to home, he helped lead the New York Army National Guard’s disaster-response mission after Hurricane Sandy.

His son Michael has developed a keen interest in one of the military’s most pressing issues: cybersecurity. Last January, he attended several sessions of the 2015 International Conference on Cyber Security, which Fordham co-hosted with the FBI.

“The directors of the FBI, CIA, and NSA were all there talking about cyber threats and how the military plays a part in protecting the country,” Hoblin said. “And the director of the NSA held a special Q&A with some of us [computer and information science students]. It was exciting.”

Hoblin hopes to build a career in one of the Army’s STEM—science, technology, engineering, and math—fields. In the meantime, he’s completing his basic infantry officer training at Fort Benning, Georgia. “I want to spend my first year in the Army getting as much education as I can,” he said.

Michael Hoblin Sr. said he’s “proud and pleased that [Michael] has chosen a career field that’s about service,” adding that Fordham graduates share a “responsibility to participate in society to make things better.”

“ROTC and the military is just one aspect of that,” he said. “All Fordham graduates, when they go on to their careers, hopefully bring that sense of service, that it’s not just about going into a career, it’s about making whatever it is that you do better for the people around you.”