skip to main content
Return to Fordham University
You are at:Home»Fordham Magazine»Books»Just in Time for the World Cup, a New Book Recounts the 92-Year History of Soccer’s Biggest Event
Above: Clemente Lisi, FCLC ’97, covering the 2018 World Cup in Russia. Photo courtesy of Clemente Lisi
The first World Cup, held in 1930, featured only 18 matches. Soccer teams from just 13 countries made the trip to Uruguay—several boycotted after they weren’t chosen as the event’s host—and the quality of the proceedings, at times, left something to be desired. (In one game, the match official failed to notice that a police officer on the sidelines kicked a ball back into play, leading to a goal.)

Contrast that with the modern World Cup. Every four years, more than twice as many national teams bring some of the world’s greatest athletes to compete in state-of-the-art stadiums plastered with lucrative advertisements, all watched by millions of fans in person and billions more on screens around the world. (As for the questionable officiating, advanced technology has helped remove at least some human error.) 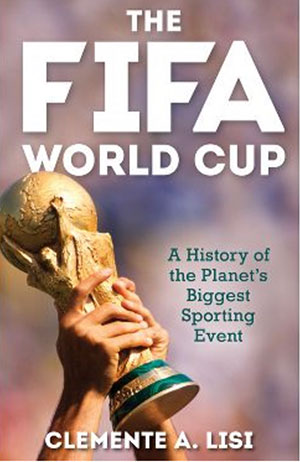 How we got from there to here is laid out in great detail in The FIFA World Cup: A History of the Planet’s Biggest Sporting Event by Clemente A. Lisi, FCLC ’97. Lisi—who has covered the event as a journalist in places like Johannesburg, Rio de Janeiro, and Moscow—fell in love with soccer as a 6-year-old in 1982, when he was on vacation with his family in Italy as that country’s national team captured the World Cup in Spain. His book, published last month by Rowman & Littlefield, provides a thorough tournament-by-tournament overview, recapping matches, describing on-field trends, and providing the historical and cultural context for each installment. Legends Pelé, Diego Maradona, and Lionel Messi get spotlighted, but the book also tells the stories of the countless other players, coaches, and executives who’ve made the World Cup into the global phenomenon it is today.

In the process, Lisi, a professor of journalism at the King’s College in New York City (and a former sports editor of The Observer), explores how the World Cup has evolved over the years, not just in terms of the ever-changing format of the tournament itself, but how advances in mass media led to slicker marketing that helped revolutionize the event. Perhaps most significantly, he shows how the tournament exploded in popularity as the sport became increasingly awash in money starting in the 1960s—a phenomenon that has also sometimes led to trouble.

Indeed, the book doesn’t shy away from the World Cup’s many (many) controversies, from the 1934 installment in Mussolini’s Italy to the myriad modern scandals of FIFA, which Lisi calls “one of the most corrupt organizations on the planet.”

This year’s tournament, currently happening in Qatar, unfortunately offers no shortage of material for Lisi, from allegations of bribery during the bidding process, to the loud opposition to holding the organization’s flagship event in a country where homosexuality is illegal, to the mistreatment of the estimated 2 million foreign workers who built the stadiums and infrastructure necessary for the tournament to take place. That the World Cup is happening now, in November and December, is itself a point of controversy: Qatar’s sweltering summer heat necessitated a change in scheduling, disrupting the sport’s usual calendar.

The book ends with a team-by-team preview of the 32 squads competing in Qatar, including a U.S. team that failed to qualify for the tournament four years ago. It also sets up the next chapter (figuratively speaking) in the World Cup’s story: a 2026 tournament jointly hosted by the United States, Mexico, and Canada—one that will feature an expanded group of 48 teams and include matches played in the New York City area, at MetLife Stadium in East Rutherford, New Jersey.