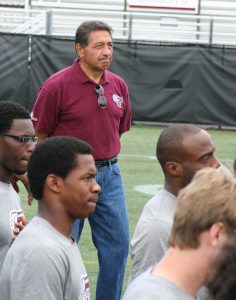 The phrase “take it to the next level” recently made Forbes magazine’s list of “The Most Annoying, Pretentious and Useless Business Jargon.” In theory, the article’s authors griped, it means “to make something better. In practice, it means nothing, mainly because nobody knows what the next level actually looks like.”

For John Zizzo, FCRH ’69, and Fordham football, however, the meaning of the phrase is clear enough.

Zizzo was a co-captain of the 1968 Fordham club football team that won a national championship, finishing the season ranked No. 1 among nearly 100 club programs in the country. He and his teammates helped complete the revival of a sport that was dormant at Fordham from 1954 to 1964.

In six seasons during the 1960s, the student-run club program—championed by George McMahon, S.J., then dean of Fordham College at Rose Hill—attracted thousands of spectators to campus. After the 1964 season, former All-America end Jim Lansing, FCRH ’43, joined the Rams as head coach. The team traveled the country, playing games in Detroit, New Orleans, and elsewhere, posting a 23-13-1 record.

The team’s gutsy play and steady success convinced University administrators that a varsity program could be sustained, and in 1970, Fordham began playing football at the Division III level (the NCAA’s lowest varsity designation).

In 1968, Zizzo (front and center, No. 75) helped lead the Fordham Rams to a national club football championship.

In 1990, the Rams moved up to Division I-AA, later renamed the Football Championship Subdivision (FCS), one notch below the top collegiate level. How much of this history do current student-athletes know?

Head coach Joe Moorhead, FCRH ’96, “always talks about the appreciation the current players have to have for the club teams,” says Zizzo, a retired partner at Cadwalader, Wickersham & Taft, and a member of the Fordham University Board of Trustees. “Joe always gives us a lot of credit. He understands that Fordham wouldn’t have a football team today if it weren’t for us.”

In 2013, Zizzo watched with pride as Moorhead and the Rams went 12-2, completing one of the best seasons in Fordham football history. Though they fell a few wins shy of a shot at a national title, they made it to the second round of the playoffs and finished the year ranked among the top 10 FCS teams in the country.

“Now,” says Zizzo, “I think we’re at the level we should be, fighting for a national championship in the FCS.”

Last year, before he was elected to the Board of Trustees, Zizzo served as the founding chairman of Fordham Football: The Next Level, a committee of alumni and friends dedicated to raising $4 million for the program in five years. In just one year, the group, now led by John Lumelleau, FCRH ’74, has raised more than $1 million.

For Zizzo, however, “the next level” is not only a reference to Fordham athletics or fundraising. He is a firm believer in the power of a Jesuit education to help lift talented, hardworking people out of poverty.

Zizzo grew up in Brooklyn, the youngest of three kids of working-class parents who, along with their two daughters, sacrificed much to make sure the family’s youngest member received a quality education. One of his older sisters paid his tuition to go to Brooklyn Prep, a Jesuit high school.

“Brooklyn Prep changed me to be a man of the world a little bit, and Fordham expanded that and allowed me to go and compete with the people at Columbia,” where he earned his law degree in 1972.

“A Jesuit education has to be rigorous, meaningful education,” Zizzo says. “If you don’t have rigor, humanity, and morality, none of this matters.”

Last year, Zizzo was on a panel of six Fordham graduates who participated in a Student-Athlete Career Mentoring Night at Fordham.

“One thing I said to the students, because it did me well for 40 years as a lawyer, is you’ve got to be completely honest; never say anything you don’t mean. You can be dishonest and succeed, but you didn’t really succeed; you cheated.”

Zizzo says the values and work ethic he received from his family and his Jesuit education helped him build his confidence, as did his experiences on the playing field.

“Football teaches you how to win as a team and rely on other people,” he says. “It helped me a great deal in my career.