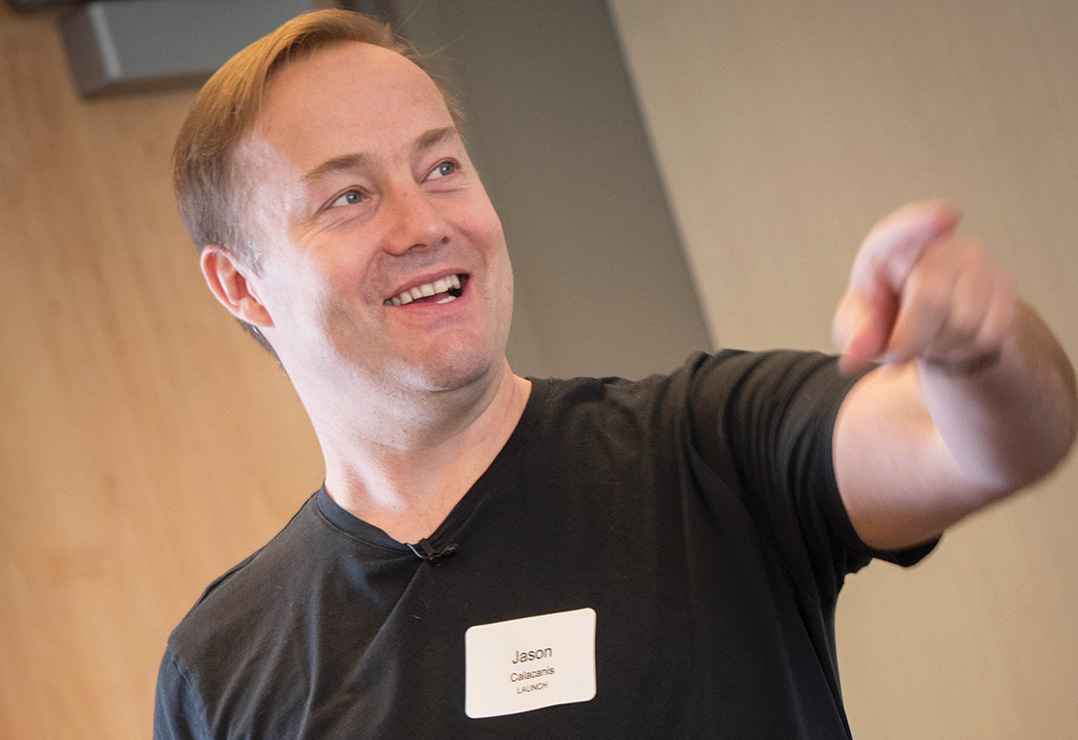 Brooklyn-born entrepreneur and angel investor Jason Calacanis aims to bring the real Silicon Valley to TV. Photo by Chuck Barry
Dressed in a black T-shirt, sneakers, and loose green khakis, Jason Calacanis, FCLC ’93, bounds into a conference room in downtown San Francisco. He cheerfully tells the 20 or so entrepreneurs gathered there for his Launch Incubator class what to expect over the next 18 weeks: lots of honest feedback from him, their peers, and the venture capitalists they’ll meet.

“It’s important you understand my goal,” says Calacanis, a veteran tech entrepreneur and an early investor in Uber and other successful startups. “I like winning. You’ve been picked by us out of all the hundreds of companies that applied—and by us, I mean me—because you can win. You are here to win. We’re going to win together.”

Calacanis started Launch to support entrepreneurs and inspire innovation. In addition to the incubator classes, he hosts the annual Launch Festival, a startup conference that draws thousands of attendees. He claims he might cut back on his involvement with the class this year, since he and his wife recently had twin girls (they also have a 6-year-old daughter). But he doesn’t seem to believe it. Just seconds later, he says he’ll probably come to all the sessions. And besides, it hasn’t been a time of cutting back for Calacanis. He also hosts This Week in Startups, a podcast named by several tech sites as one of the best of its kind, and he’ll soon star in a reality TV show he’s co-creating for Harvey Weinstein’s company about—no surprise—startups.

The show will be authentic, he promises, and different from others on entrepreneurship, such as Shark Tank, in that it will focus on how startups are actually created. He’ll personally pick the participants and judges, he says, and the show will help him achieve his goal of becoming the greatest angel investor of all time, helping others build wildly successful companies.

In class, Calacanis advises the entrepreneurs, often lacing his insights with expletives and exclamations. He decries Silicon Valley “tourists” who just want to get rich quick with “apps no one wants!” And he says there used to be too much money in startups, “now there’s no money!” But he tells his students they’re hard workers with skills and a real product, and he says what venture capitalists need to hear is simple: Who are your customers, how much money do they give you, and what’s your profit margin? Grinning broadly, he says it takes less than 30 seconds to make that kind of pitch, “and it’s everything investors want! Anything else is window dressing!”

A few days later, at his Launch offices in the Tenderloin district, Calacanis says there’s a good reason why he seems to be having the time of his life in his class: He is.

Calacanis has been in the tech world a long time. He started the Silicon Alley Reporter back in the mid-1990s and built it from a 16-page newsletter to a glossy magazine of a few hundred pages, becoming a key player in the internet industry as it was taking off in New York City. He not only published and edited the magazine, he delivered it as well, pulling a luggage cart around Manhattan. On the masthead, he listed himself as “Publisher, Editor, and Delivery Boy.”

The New Yorker called him “the kid who hooked up New York’s wired world,” and Charlie Rose, 60 Minutes, and other old-media giants sought the insights of the upstart publisher from Bay Ridge, Brooklyn, with a bartender father and a mom who worked as a nurse. He says it was a heady time. “All of a sudden you get to pick who’s on the cover of the magazine in the hottest technology sector in the history of mankind. There’s billions of dollars at stake, and you have 75 people working for you at the age of 27. For a kid with no power from Brooklyn who had to hop the turnstile, it’s pretty awesome.”

He displayed that kind of hustle getting into Fordham, a story he recounts fondly. With less-than-stellar grades, he knew Fordham was a long shot. But he was determined to go, so he listened to his taekwondo teacher, a Fordham alumnus, who told him to be persistent. Calacanis stayed in touch with an admission officer, bringing him reference letters from teachers and bosses, and showing him his senior year grades, which had risen significantly. Finally, Calacanis says, the admission officer told him he was leaving Fordham, and his last act at the University would be to grant admission to the most promising nontraditional student. When Calacanis told his father, his dad responded by saying that he’d just lost his bar for nonpayment of taxes. Good luck paying for school, he told his son.

After all that work to get in, Calacanis wasn’t going to let not having the tuition stop him. He went to Fordham full time at night and worked multiple jobs—as a barback, a waiter, and a tech in the University’s computer labs. He says he brought that work ethic to his founding of Silicon Alley Reporter. After it folded in the dotcom crash, he co-founded and built Weblogs Inc., a network of blogs supported by advertising. A few years later, in 2005, he sold it to AOL for more than $25 million.

Calacanis has called his investing success “dumb luck.” But as an early investor in Uber, Thumbtack, and other billion- and multimillion-dollar companies, he doesn’t actually believe that. “I say it as a joke to see if people are paying attention,” he says. “When I tell people I got lucky seven times, I’m trying to make a point to them, whether they get it or not, that I’m not lucky, I’m hardworking.”

Back at his Launch offices, Calacanis is summoned to get made up for his podcast. He continues talking as he walks upstairs. Now that he’s in his 40s, and he’s made his money and has a family, he says he’s outgrown his immature impulses to prove that his successes were more than just luck. And he wants to share his advice with a broader audience. Most reality shows are silly, he says, but if done well, they can teach people something about fashion, say, or cooking. He wants to do that for entrepreneurship—and not just for the ratings but for a fame that’s more lasting.

“I don’t need to be a celebrity or get any more press,” he says. “It all goes back to the grand plan to be the best angel investor of all time.”