skip to main content
Return to Fordham University
You are at:Home»Fordham Magazine»Books»Invisible Chronicles the Life of Eunice Carter, a Pioneering Black Woman Prosecutor 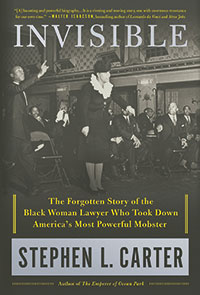 Above: The cover of Invisible features Eunice Carter at a meeting of black Republicans in 1944, when she supported her mentor Thomas Dewey’s U.S. presidential campaign. Top: Eunice Carter, 1944. Photo by Gordon Coster/The LIFE Picture Collection/Getty Images

Invisible: The Forgotten Story of the Black Woman Lawyer Who Took Down America’s Most Notorious Mobster by Stephen L. Carter (Macmillan)

In 1936, just four years after graduating from Fordham Law School, 36-year-old Eunice Carter, LAW ’32, masterminded the sting operation that resulted in the imprisonment of mobster Charles “Lucky” Luciano. Carter, the first African-American woman to serve as a New York assistant district attorney, was the only woman and the only person of color on the team—led by future New York governor Thomas E. Dewey—that brought down the country’s biggest gangster.

Carter’s grandson, Yale Law School professor and best-selling author Stephen L. Carter, recounts his grandmother’s time at Fordham, her meteoric rise as a prosecutor, and her work on the Luciano case in Invisible: The Forgotten Story of the Black Woman Lawyer Who Took Down America’s Most Powerful Mobster, published last October by Macmillan.

“She was black and a woman and a lawyer, a graduate of Smith and the granddaughter of three slaves and one free woman of color, as dazzlingly unlikely a combination as one could imagine in New York of the 1930s,” he writes of his grandmother, “and without her work the Mafia boss would never have been convicted.”

Eunice Carter spearheaded the investigation that proved the mob ran New York City’s brothels, and she helped flip witnesses that specified Luciano’s involvement. The mob kingpin was subsequently sentenced to 30 to 50 years in prison in 1936.

Carter’s career-defining achievement came at a time when the American Bar Association discriminated against African-American lawyers, and women lawyers’ contributions were rarely recognized. Her grandson’s book notes that while Carter’s triumphs were shadowed by tragedy and prejudice—and her path was often blocked by the social and political expectations of her time—she never accepted defeat.

“Skill, talent, and ingenuity prevail in woman-kind as well as man-kind,” Carter declared many years later at the International Council of Women triennial conference in Greece. “A country or community which fails to allow its women to choose and develop their individual beings in an atmosphere of freedom thrusts away from itself a large part of the human resources which can give it strength and vitality.”

Carter enrolled at Fordham Law in 1927 intent on declaring her own freedom from a life as a Harlem “society matron.” The wife of a prominent dentist and mother of a young child, she was eager to escape what she saw as a “prison of domesticity,” her grandson writes. One year into law school, however, Carter was excused to care for her ill son. When she returned to Fordham 18 months later, she did so while working full time as a supervisor in the Harlem division of the Emergency Unemployment Relief Committee.

Carter’s time at Fordham marked the realization of a desire to study law that dated back to age 8, her grandson notes. It was then that she told a young boy on the beach that she wanted to be a lawyer “to make sure the bad people went to jail.” Three decades later, she put America’s most powerful mobster behind bars.