skip to main content
Return to Fordham University
You are at:Home»Fordham Magazine»Books»Inventing Scrooge 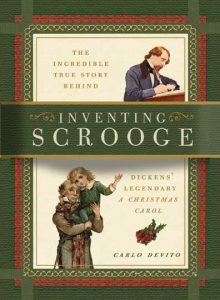 Many readers know that some of Charles Dickens’ classics were inspired by his childhood, when he was forced to labor in a boot-blacking factory after his father went to debtor’s prison. But how many know that A Christmas Carol, his beloved, ghostly tale, was conceived as a way to get people to support schools for poor children? Or that the idea for famed miser Ebenezer Scrooge came from a tombstone for one Ebenezer Scroggie, engraved with what Dickens read to be “mean man” (it actually said “meal man”)? In this charming bit of literary history, Carlo DeVito offers many researched tidbits on the details of Dickens’ timeless fable. And he suggests that Scrooge’s relenting to give underpaid clerk Bob Cratchit a raise might have been the author’s “reworking of his life into a fairytale,” one in which someone had saved his own father from financial ruin. DeVito writes: “A Christmas Carol delivers a timeless message of hope. … Yet most inspiring of all is the story behind the story.”

Read about a rare first edition of A Christmas Carol on display in Walsh Family Library on the Rose Hill Campus.