skip to main content
Return to Fordham University
You are at:Home»Fordham Magazine»Features»Inauguration Concert Serves as Homecoming for Fordham Band Blonde Otter
Photos by Chris Taggart
Rob Falcone grabbed the microphone on the stage of the Walsh Family Library steps and looked out over the crowd that had gathered on the lawn to celebrate the inauguration of Fordham’s new president, Tania Tetlow, and help mark the 75th anniversary of WFUV, Fordham’s public media station.

“It’s an honor to be here, playing songs we wrote while we were here,” said Falcone, a 2017 graduate of Fordham College at Rose Hill, to cheers from the audience.

Falcone sings and plays bass in a band called Blonde Otter, which was the opening act of a special concert, presented by WFUV, that brought the inauguration day festivities to a rollicking close on Friday, October 14.

“Blonde Otter has a unique connection with WFUV and Fordham University—all of the members are Fordham grads recently and [several] of them actually worked at WFUV,” said Alisa Ali, PCS ’14, WFUV’s midday host. Ali created a feature, “NY Slice,” to highlight local New York artists on her show, and two of them—Blonde Otter and Rén with the Mane—were part of the concert. “They offer up a true New York slice of life through their catchy songs.”

Since 2017, Blonde Otter has released three EPs, and last year, the pop rock quintet put out their first full, self-titled, album. Ali said their music examines “the challenges of life through a spirited lens that keeps you moving.” 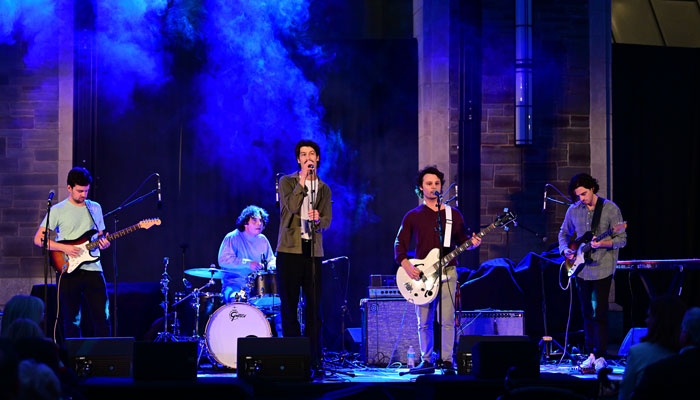 Blonde Otter performed at the WFUV-produced inauguration concert on October 14.

A Return to Their Roots

For the band members, several of whom met as first-year students in Martyrs’ Court, returning to play at Rose Hill felt like a dream come true.

“Looking at our freshman dorms while [performing] on the steps [of the library] was something else,” Falcone said after the show.

The group had talked about forming a band soon after they became friends, but didn’t have performing space until the 2016–2017 academic year, when they moved off campus to Bathgate Avenue, and Rob’s brother, Matthew Falcone, FCRH ’18, was able to bring his drums to the basement of their new house.

“We always had similar tastes in music as friends, so it kind of fell into place,” said Michael Guariglia, FCRH ’17, the band’s lead singer. “It was always on our minds to try and do something musically together, but once we had the space, that’s when it took off.”

They began playing in basements around Fordham, primarily cover songs at first. 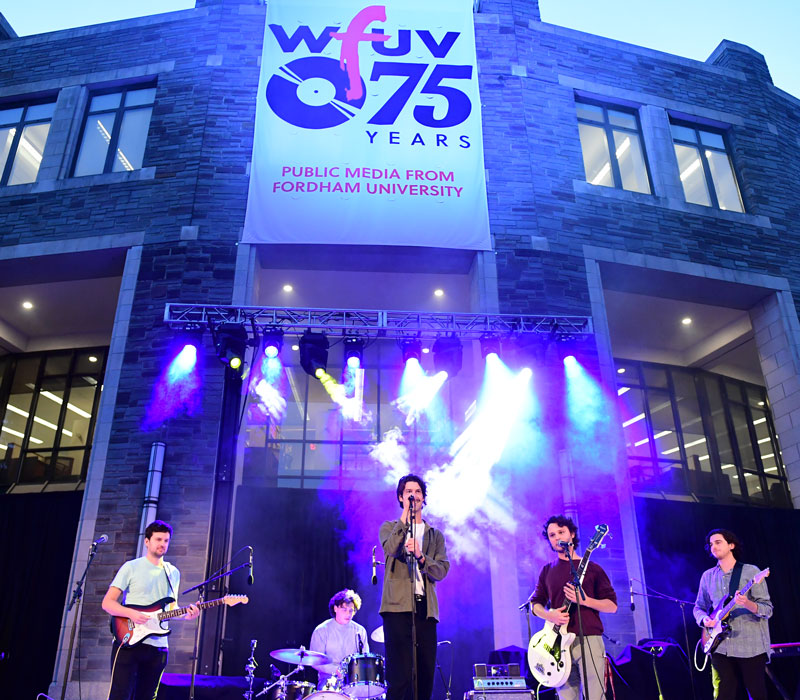 “As we got closer to graduating, we started writing original music and recorded it and started playing out in Manhattan, in Brooklyn,” said Rob Falcone. “And fortunately, the Fordham crowd followed us and we made some other fans by doing that, too.”

The band, which also features lead guitarist Dan Wines, FCRH ’17, and rhythm guitarist Stephen Malichek, GABELLI ’18, competed in the University’s Battle of the Bands competition to open Spring Weekend in 2017. They didn’t win it that year, but Matthew Falcone joked that playing the inauguration show was even better.

“Because we felt like losers,” he said laughing, “and this is a great validation.”

Borris was the first to play one of their songs on the air, on The Alternate Side, and then Ali played them on her midday show. Hearing themselves on the radio was “surreal,” the band said, especially since WFUV had been a part of their lives for many years.

“My mom has been a longtime [member of WFUV], even before I went to Fordham, so driving to school in the morning [and] after, WFUV always was on,” Guariglia said, “so it’s a real honor.”

The Falcone brothers and Malichek even worked at the station as undergraduates, with Rob Falcone serving as Ali’s audio editor during his junior year.

From the Big Easy to the Big Apple

The concert also included a set by Rén with the Mane, a Brooklyn-based artist “who makes vibrant pop music with touches of rock and soul,” Ali said, and it featured the Preservation Hall Jazz Band. The group, which is celebrating its 60th anniversary, is known for performing the “inimitable music of their native New Orleans,” according to WFUV’s Eric Holland, and featuring some of the city’s most exciting performers. 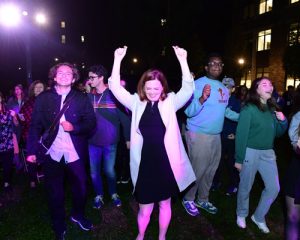 Tetlow, who grew up in New Orleans, joked that she was supposed to introduce the legendary headliners, but the band beat her to it. They marched down the Old Elm Road with the horn section playing “I’ll Fly Away,” the gospel classic. As the group reached the Walsh Library stage, the rhythm section joined in and Tetlow, who has sung professionally, added her own soaring voice to the mix, to the delight of the crowd.

After that rousing entrance, Tetlow said she was grateful to WFUV and to all the performers, particularly the Preservation Hall Jazz Band, for helping her “feel at home here at Fordham.”

“We’re here to celebrate 75 years of WFUV, the coolest thing about Fordham University,” she said, describing station’s heritage and national renown as a place for music discovery and a multimedia training ground for students.

Guariglia said he and his bandmates were thrilled to return to campus to be a part of the festivities.

“I haven’t been back in a while, and to be able to come back, playing our own music, it’s a great moment,” he said. 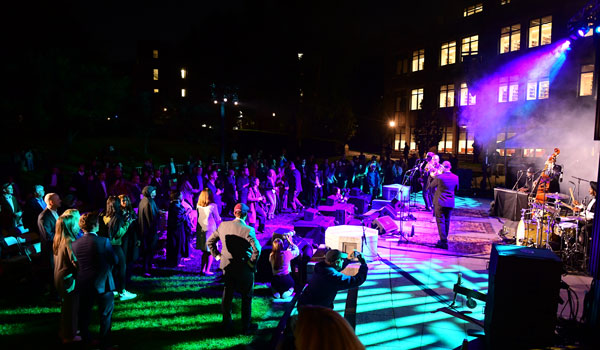 The Preservation Hall Jazz Band performed at the inauguration concert.