skip to main content
Return to Fordham University
You are at:Home»Fordham Magazine»Features»In Ukraine War Journal, a Personal Story of Resistance
Above: Priya and her husband, Alex, with their infant son, Neil, in 2019 following Neil’s baptism in St. Michael’s Golden-Domed Cathedral in Kyiv, Ukraine. Photos courtesy of Priya Ravindran

For Priya Ravindran, who met her Ukrainian husband at Fordham and later adopted his country as her own, reporting on the war and sharing her young family’s story is an act of resistance.

When Russian president Vladimir Putin ordered a full-scale invasion of Ukraine in February, Priya Ravindran was living in Kyiv with her Ukrainian husband and their 2-year-old son, Neil. The couple met in 2010 as graduate students at Fordham and were married in Kyiv four years later.

“We led fairly normal lives. We worked, traveled within Ukraine and internationally, went out on the weekends, went out to eat, met with friends,” said Ravindran, who was an editor at the Ukrainian state-run news station UATV English before going on maternity leave in 2019. “It wasn’t until February 24 that our lives changed forever.”

Two days later, amid reports of military and civilian casualties near Kyiv, they fled, joining more than 12 million people who would leave their homes following the Russian invasion.

‘Trying to Play My Part’

As they drove away, “Alex asked me in the car, ‘Do you realize you are now officially a mother fleeing war with an almost-3-year-old?’” Ravindran wrote on February 26. 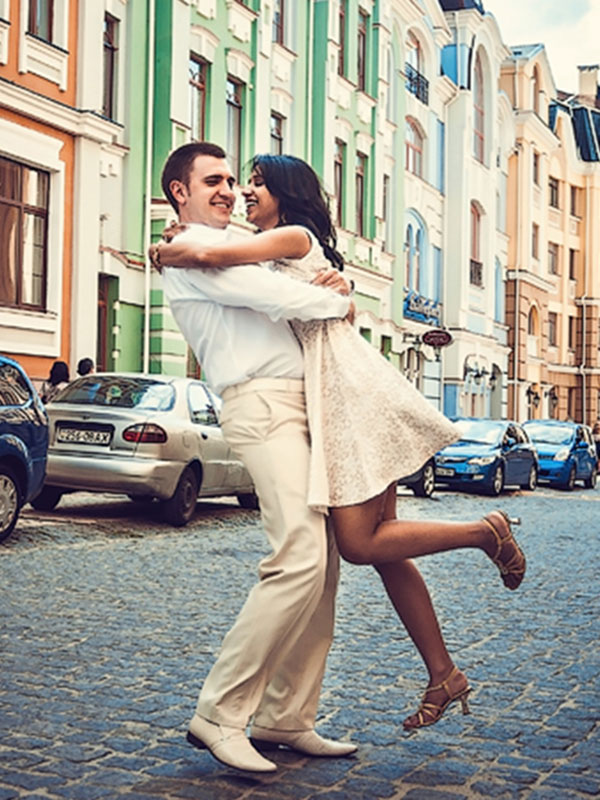 “We always knew this was a possibility. Even before I got pregnant, I asked Alex many times, ‘What if we have a child and full-out war breaks out?’ … Like with everything in life, you try to put those thoughts at the back of your mind, but here we are.”

They headed west with a friend and his mom, driving through numerous Ukrainian military checkpoints. “We are surrounded by the Carpathian Mountains, vast snow-covered fields, and heaps and heaps of trees with just the perfect amount of snow,” she wrote. “Seeing the pristine beauty of nature, I almost think to myself, ‘This is all a dream, right? It has to be.’ But no, this isn’t a dream. … Ukraine is still fighting for its existence.”

On February 28, they arrived at their destination: a friend’s home in Ivano-Frankivsk.

“I have a lot of guilt that I’m not doing enough, not helping enough,” Ravindran wrote that day. “But I’m trying to play my part in letting people know what’s happening, as best as I can, in the best way I know how: through my love of writing.”

Since late February, Ravindran has been posting daily accounts of the war. In each post on her public Facebook page, she typically mixes news and analysis with a firsthand account by another writer as well as personal stories of her family’s experiences and emotions. (To protect her husband’s identity, she uses the pseudonym Alex to refer to him.)

Her posts have reached a broad audience. On March 3, one day before Neil’s third birthday, she was interviewed by Indian TV journalist Barkha Dutt, “whose reporting in the 1990s on the India-Pakistan war convinced me as a 12-year-old to be a journalist,” Ravindran wrote.

From Mumbai to Kyiv via Rose Hill

Born in Mumbai, Ravindran was 17 years old when she moved from India to the U.S. to attend college. After earning a bachelor’s degree in journalism and international relations at the State University of New York at Oswego, she enrolled at Fordham to pursue a master’s degree in political science. 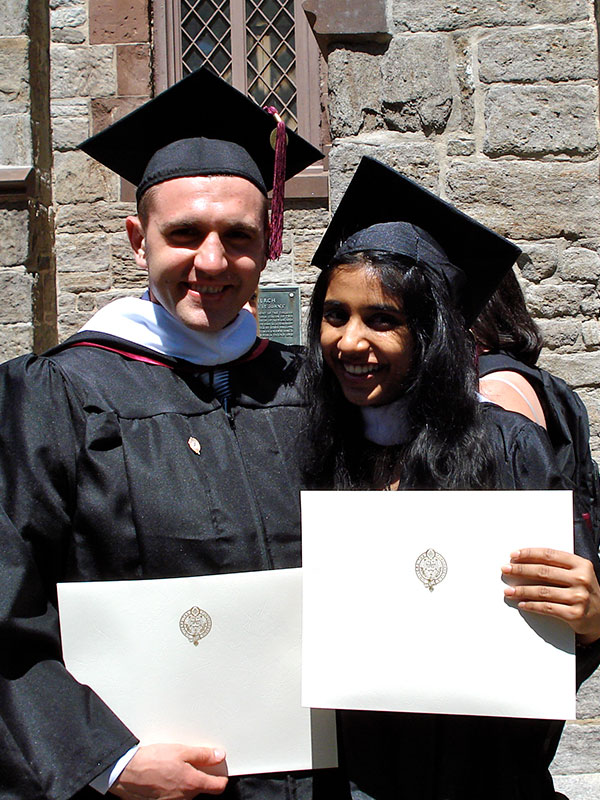 Alex and Priya at their Fordham diploma ceremony in 2012

The day before her classes started in fall 2010, she left her walk-up apartment on Arthur Avenue to buy groceries. “When I returned, I was holding the door to the building open with one leg while pushing all my bags in,” she said. “At the same time, Alex exited his apartment on the first floor, stopped, and asked me if I needed help. I told him I could manage, but he insisted, so he carried all my bags upstairs and started to run away. I screamed ‘Priya!’ after him, and he said, ‘Alex!’”

Alex had arrived at Fordham on a Fulbright Fellowship, and he was enrolled in Fordham’s International Political Economy and Development program. The two saw each other in class the next day, Ravindran said, but it wasn’t until the end of the semester that she learned that they share a love of trance music. “I invited him and his roommates to a concert by a famous German duo,” she said. “He asked me out the next day, and the rest is history, as they say.” They were married in Kyiv on June 26, 2014.

A Rousing Song for the Motherland

In her daily posts on Facebook, Ravindran has covered numerous aspects of the war. In early July, she published transcripts of phone conversations intercepted by the Ukrainian Security Service in which Russian soldiers discuss the killing of civilians. In mid-May, she shared the results of a Kyiv School of Economics study indicating that, as of May 10, the war had caused an estimated $600 billion in economic losses in the country. And in June, she covered a nightly address by Ukrainian president Volodymyr Zelenskyy in which he said that at least 828 children had been affected by the war—446 injured, 243 killed, and 139 missing.

“We talk about war and its impact in numbers, and as jarring as they may be,” Ravindran wrote, “they don’t always convey the full story. … They don’t tell us about the trauma parents and their children are dealing with. We remember so many wars in numbers, but we forget about the stories.”

Amid the fear and anxiety of the war, and the near-constant threat of air raids, she has found moments to celebrate: the “happiness on Neil’s face” when he gets a couple of “siren-free” hours to play in a local park, for example, and the “immense joy” of seeing the Ukrainian rap and folk band Kalush Orchestra win the annual Eurovision Song Contest in mid-May.

“It doesn’t mean anything for the war,” she wrote at the time, “but it was a small relief for the psyche.” She noted that the band’s lead singer, Oleh Psiuk, wrote the winning song, “Stefania,” as an ode to his own mother. But since the Russian invasion, the song has taken on new meaning.

And with lyrics like, “I’ll always find my way home, even if all roads are destroyed,” she added: “Some are reminded of the motherland itself.”