skip to main content
Return to Fordham University
You are at:Home»Fordham Magazine»In Toppeta Scholarship Fund, a Family Legacy and Family-Like Bonds
Debra and William Toppeta with Gianna McGrath, recipient of the scholarship fund they created at Fordham. Photo by Tom Stoelker
The story of the John and Rita Toppeta Endowed Scholarship began eight decades ago with two young people who, in earning Fordham degrees, were reaching beyond their station: John was the son of Italian immigrant parents, a seamstress and a public utility employee with little formal schooling; Rita, after earning her undergraduate degree from Fordham, defied gender stereotypes by earning her law degree—at Fordham—and becoming an attorney, as did her husband.

“Both of them loved Fordham,” said their son, William J. Toppeta, FCRH ’70, a University trustee who with his wife, Debra Toppeta, created the scholarship in 2000 to honor them and benefit Fordham students—just one of their many generous gifts to the University.

The scholarship has turned out to be a richly rewarding way to honor his parents’ legacy.

For years, it helped bring a Fordham education within financial reach for several students at a time. Then, five years ago, the Toppetas modified the scholarship to cover full tuition as well as living expenses for one student facing high financial hurdles, in the process forming a bond with the students—two, so far—who have received this full support.

In 2020, seeking to advance the cause of racial justice, the Toppetas once again modified the scholarship so that it’s awarded with a preference for students who, in addition to showing academic merit and financial need, are first-generation college students or come from underrepresented racial and ethnic groups. The murder of George Floyd “had a huge impact on us,” William Toppeta said. “We wanted to actually do something that was impactful as an anti-racist example in action.”

They are also making a new contribution to their scholarship fund, advancing two priorities of the University’s $350 million fundraising campaign, Cura Personalis | For Every Fordham Student: access and affordability, as well as diversity, equity, and inclusion.

The current Toppeta Scholar, Gianna McGrath, a sophomore in the Gabelli School of Business, got the news in her second week at Fordham and was immediately moved to tears of joy. “It’s kind of an indescribable feeling, an eternal gratefulness,” she said.

The scholarship allayed her and her family’s worries about her loan amounts and allowed her to cut back on part-time work in favor of other things, like exploring the city and joining student clubs. She soon learned that the Toppetas were personally interested in her success. After meeting them at dinner with her family, she found they were “very genuine and down to earth,” said McGrath, who was born in Jamaica. “They’re so loving of all cultures, all people.” 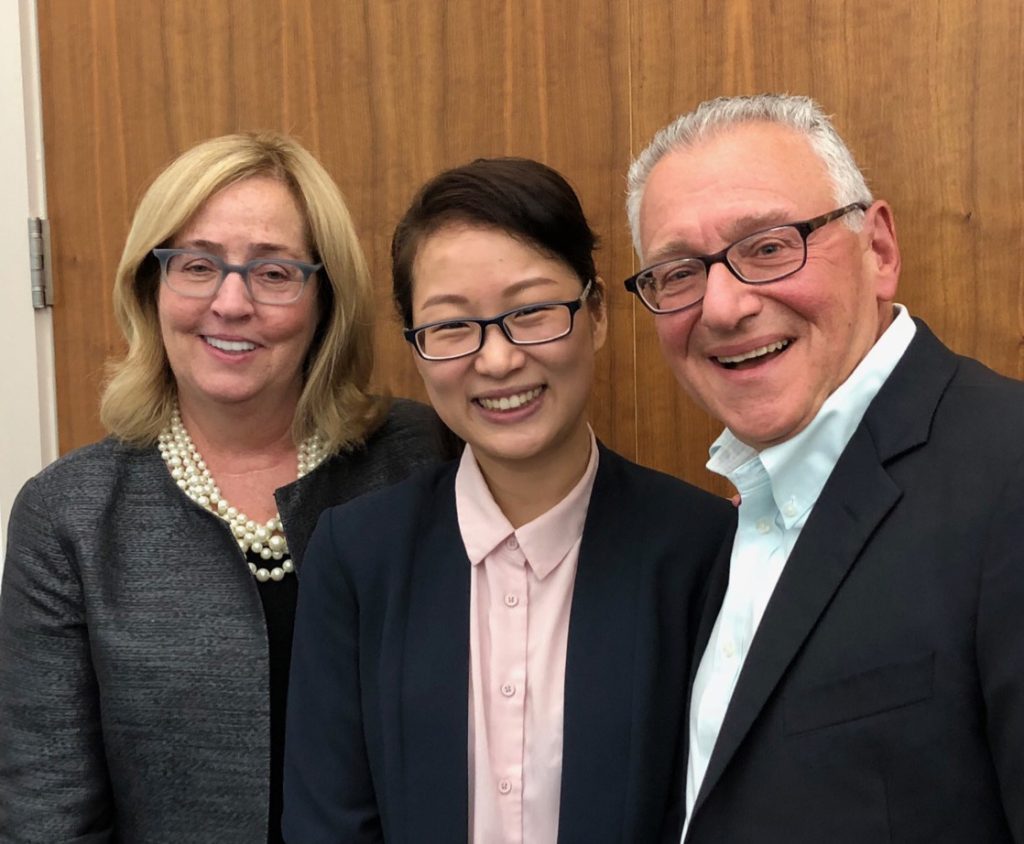 The first recipient of the full scholarship, Huiling Cai, GABELLI ’21, immigrated from China seven years ago and earned an associate degree from LaGuardia Community College in New York City, learning English along the way. Receiving the Toppeta scholarship made possible her Fordham education and everything that has flowed from it, including her former job at EY and her current job at PwC, she said.

And the Toppetas became a welcome presence in her life in many ways, such as visiting her during her first month at Fordham; attending a ceremony for her and other Dean’s List honorees; and providing advice and support during challenging moments. “They are truly my angels,” she said.

The benefits go both ways. “It’s not just Gianna and Huiling who’ve benefitted from this. We’ve gotten a lot back,” Debra Toppeta said. “It’s just enriched our lives tremendously.”

In an interview, they elaborated on their reasons for modifying the scholarship, as well as lessons learned over the course of their careers—he, as an executive at MetLife and president of management consulting firm Macomber Peak Partners; she, as an attorney and founder and publisher of the award-winning website Woman Around Town.

Can you tell me more about your decision to refocus the John and Rita Toppeta Endowed Scholarship on students from underrepresented groups?
William Toppeta: My father felt very strongly about Jesuit education. He thought that the training that he got at Fordham was strongly morally based. And I think that again sort of connects to what we’re trying to do here with the scholarship. We believe very strongly that this is the right thing to do. Racism is still part of this country, but it’s been part of this country for hundreds of years, and each of us needs to do something about it.

What we’re doing, we think, is 100% consistent with Fordham’s history and philosophy. Fordham has always been a place that was focused on the underdog, the people who did not have the advantages. What Bishop John Hughes had in mind when he founded Fordham is that he wanted to give opportunity for people to get a higher education who otherwise would not have had that opportunity. At the time, most of those people happened to be Irish, and he, of course, was Irish. Then later on it was others—it was people from Eastern and Southern Europe. My father was one of those people.

Your mother knew something about facing discrimination too, I think?
William: She did talk about it. Her father was a lawyer, and she and my father practiced with him in New York City for a time. She said to me that when her father first sent her to court, she answered the calendar call for her client and the clerk of the court said to her, “No, no, no, you have to be a lawyer to answer the calendar call.” And she said, “I am a lawyer.” So she faced a lot of obstacles, but I think it made her tougher.

What career advice would you offer students?
William: When I was at Fordham, we learned a lot about the Ignatian and the Jesuit perspective, and one of its fundamentals is that a person should have a contemplative life and an active life. I think part of the contemplative part of life is to think about getting to know yourself and understanding yourself, and your abilities and qualities, in as objective a way as you can. Somewhere along the line, either someone else is going to ask you or you’re going to ask yourself, can I accomplish that? When you’re offered a job or an opportunity, you’d better know the answer, because you may not be given much time to decide. I’ve had situations in my career where I was given 24 hours to decide whether I was leaving the country or not for an opportunity. I think in our times, things happen very, very fast, and so if you don’t take time to think quietly about things, you’re going to miss a lot of chances. A lot of life comes down to fundamental principles and understanding, and I think Fordham is very strong on these.

Debra Toppeta: My advice would be to always continue to grow. The way to really get to know yourself is to just keep pushing forward and trying new things. Stay flexible, keep informed, and keep never stop learning so you’re always prepared for your next opportunity, because they’ll present themselves in ways you didn’t expect. I started in business, and then I went to law school, and then I started Woman Around Town. My partner, Charlene Giannetti, came up with the idea; she was a journalist at Businessweek and wanted to branch out on her own, and she knew I could write, and that I was a lawyer and was looking for my next endeavor.

So I jumped at it, and it’s been terrific. It was very challenging when we started, but we also had great opportunities because it was during the Great Recession, when print media was laying off reporters, and we were able to offer them work. We’ve received over 30 awards for journalism from various organizations.

Is there a book that has had a lasting influence on you?
William: I would point to categories of books. I read a lot of history and biography because they’re the story of challenges that people faced, when they succeeded, when they failed. I don’t necessarily think that history repeats itself, but we can certainly learn from history and see parallels. I just finished reading a very good history by Simon Sebag Montefiore of the history of the Romanovs, the family that ruled Russia for 300 years. And if you read that history, and then you think about what’s going on today with Russian president Vladimir Putin and Ukraine, you can see very clearly that Putin is just a continuation of the czars in a slightly different form.

Debra: I read The Warmth of Other Suns, by Isabel Wilkerson, about the Great Migration of African Americans from the South to the North and West. It’s a collection of stories that shows you just what people will do to improve their lives and their family’s lives. Each one of those stories is like a profile in courage and very inspirational.

Looking at the world today, what are you optimistic about?
William: I’m optimistic about a couple of things. One, people are still free to think and say what they want within very broad parameters in this country. So it makes me optimistic that at least at the moment, we are still operating democratically. The other thing I’m optimistic about is the young people. The more young people that I meet, the more confident I am about the future. I really do think that the younger generation is better equipped than we were, and that they’re genuinely trying, in most cases, to do the right thing.

To inquire about supporting scholarships and financial aid or another area of the University, please contact Michael Boyd, senior associate vice president for development and university relations, at 212-636-6525 or [email protected]. Learn more about Cura Personalis | For Every Fordham Student, a campaign to reinvest in every aspect of the Fordham student experience.