skip to main content
Return to Fordham University
You are at:Home»Fordham Magazine»Books»In the Company of Sherlock Holmes

In the Company of Sherlock Holmes: Stories Inspired by the Holmes Canon featuring a story by Jeffery Deaver, LAW ’82 (Pegasus) 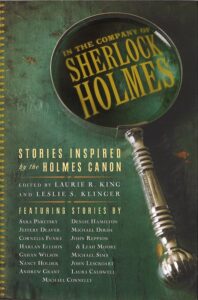 In 1887 Sir Arthur Conan Doyle introduced Sherlock Holmes to readers, and the brilliant, bizarre detective has become one of the most beloved and enduring of fictional characters. He has been adapted over the decades on the printed page, on stage, and on the big screen. The current BBC One TV series Sherlock, starring the superb Benedict Cumberbatch—reimagines the title character as a 21st-century Londoner.

This book, a collection of original works inspired by Doyle’s stories about Holmes, his sidekick Watson, and his nemesis Moriarty—will delight mystery fans. Bestselling author Jeffery Deaver, LAW ’82, is one of the book’s contributors. Here, in his short story “The Adventure of the Laughing Fisherman,” Deaver introduces Paul Winslow, an intelligent bipolar freelancer with a fondness for the Holmes-Moriarty rivalry, meddling in a crime scene in Manhattan’s Central Park. Detective Carrera, impressed by this nosy citizen’s shrewd eye for details and deduction, invites Winslow to consult on the case.