skip to main content
Return to Fordham University
You are at:Home»Fordham Magazine»In the Business of Social Justice: Five Questions with Ignacio Fernández de Lahongrais‬‬‬‬‬‬‬
Photo by Bruce Gilbert
When Ignacio Fernández de Lahongrais meets a Jesuit, they often comment on his first name, which he shares with the Jesuits’ 16th-century founder. But he wasn’t named after St. Ignatius Loyola, he says. In fact, he didn’t even know about Loyola or the Jesuits until he was in high school in Puerto Rico during the 1980s. That’s when he began reading about liberation theology.

The social-justice movement, which emphasizes solidarity with the poor, was championed by many Jesuits in Latin America at the time, and it made a deep impression on Fernández de Lahongrais. So when he was looking for colleges in New York, he was drawn to Fordham’s Jesuit mission.

Now, as a criminal defense attorney, he continues his commitment to social justice, often taking on pro bono cases in Washington, D.C., Boston, and his native Puerto Rico, where he still resides.

In late January, for example, he filed a complaint against the United States, demanding equal rights and obligations for U.S. citizens in Puerto Rico when it comes to federal funding for Medicaid, Medicare, and the Children’s Health Insurance Program (CHIP). Disparities in funding, he argued, violate the equal protection clause of the Fifth Amendment and put vulnerable groups—the poor, the elderly, and children—at risk.

In the past year, Fernández de Lahongrais has also found time to pursue another passion: teaching. 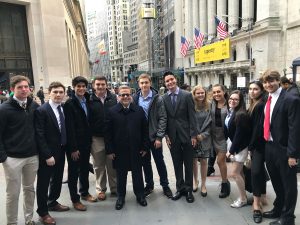 Last fall, the 1987 graduate of Fordham’s Gabelli School of Business returned to Rose Hill to teach The Ground Floor, a course that introduces Gabelli undergrads to various business disciplines. It’s a class he is particularly well suited to teach. After graduating from Fordham, he passed the CPA exam and later earned an M.B.A. in finance.

“The kids were so smart, and so well prepared,” he said of his first teaching experience. He took his class on field trips to the New York Stock Exchange and Credit Suisse, and he added case studies to each section of the curriculum to help students get in-depth knowledge of the different career paths they could take.

Fernández de Lahongrais has stayed in touch with many of his Fordham friends since graduation—his college roommate is the godfather of one of his three children. But it was only a few years ago that he reconnected with his alma mater. He joined the President’s Council, a select group of alumni and parent philanthropists committed to raising the University’s profile. And one of his daughters, Sofía, is now a sophomore at Gabelli; last fall she helped spearhead some of the on-campus efforts to help victims of Hurricane Maria in Puerto Rico.

“We’re making Fordham our family university,” he said. “And I’m very happy to see where Fordham is going.”

What are you most passionate about?
I’m most passionate about defending those who cannot defend themselves. I think the law is a beautiful thing, but it is sort of like a spiderweb. It’s beautifully intertwined and majestic, but it’s also great at catching the weak; the powerful can just punch through and break that spiderweb. That’s what I see every day, and it bothers me.

‪What’s the best piece of advice you’ve ever received?
To learn to write with my left hand. I really gave this advice to myself, but it changed everything. Right after Fordham, I joined the Navy. But just before leaving for Officer Candidate School, I broke my right hand, and they had to postpone my entry. I basically had nothing to do, so I decided to take the CPA exam. But I had to learn how to write with my left hand to study. And I did. That’s when I realized that there’s always a valid excuse not to do something, but the thing is, there’s always a way to do it anyway.

‪What’s your favorite place in New York City? In the world?
In New York, the Beacon [Theatre] and the Bowery. I love music, especially underground music and the old classics. I mean, I’ve seen so many great bands at the Beacon—like Hot Tuna and Elvis Costello—and on the Bowery. CBGB was a place I used to hang out when I was at Fordham. That’s where the Talking Heads and the Ramones started [in the ’70s]. It all reminds me of New York back then, when it was falling apart but it was very artistic.

‪Name a book has had a lasting influence on you. Explain how and why.
One Hundred Years of Solitude by Gabriel García Márquez. That book was so implausible. But the stories he was telling really described life in Latin America. He wrote about how some things never change, how we were stuck in time. And the way he wrote, I found it to be so magical, so incredible. He wasn’t telling me, he was showing me. That made me love to read literature.

‪Who is the Fordham grad or professor you admire most? Explain why.
Father McShane. He inspired me to give back to Fordham, and to do everything that I’m doing with the University. I also got closer to the church, because I had been disillusioned for a time. But seeing Father McShane and seeing our Jesuit pope from Argentina, I feel like things are changing.