skip to main content
Return to Fordham University
You are at:Home»Fordham Magazine»In New York Transit Museum Tour, a Transporting Look at Other Eras
“Last Elevated Train to Brooklyn on Bridge,” March 6, 1941, from the Lonto/Watson Collection. All images courtesy of the New York Transit Museum
On June 10, a Fordham alumni group got on board for a virtual trip through the history of the New York City transportation system and efforts to make it more efficient and sustainable over the years.

Educators with the New York Transit Museum guided attendees through two centuries of transit history as part of the event, “Sustainability of Public Transportation,” organized by the Office of Alumni Relations. 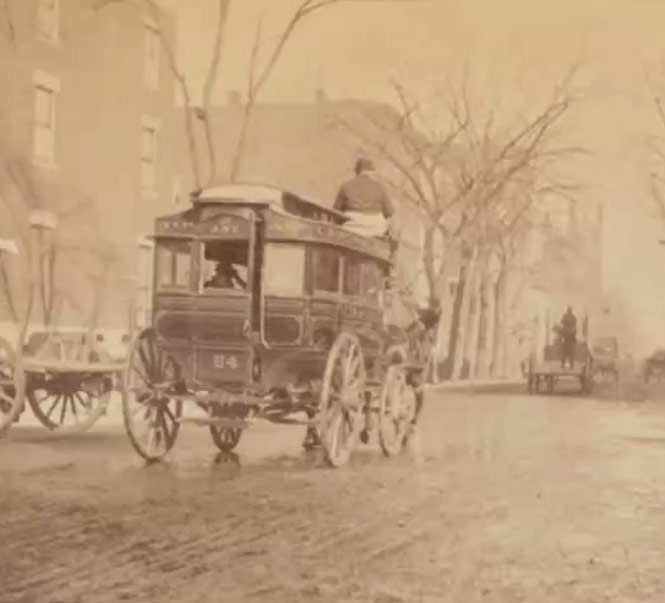 The presentation was framed by themes of economics and environmental and social sustainability. “We’re talking about public transportation systems that should be affordable, efficient, provide access to all, minimize their environmental footprint, and mitigate the effects of climate change,” said Kate Lanceley, an educator with the museum. She spoke—via Zoom—from inside a vintage train car at the museum, housed in a decommissioned subway station in downtown Brooklyn.

Thus began the tour. The first stop? New York City of 1827, a time when public transportation began with horse-drawn omnibuses, which offered bumpy rides on wooden wheels along cobblestone streets. Riders paid about 12 pennies, “which was really a lot of money at the time”—unaffordable for most people, Lanceley said.

Fares were lower, and the ride smoother, in horsecars riding on tracks, which debuted in 1832. But the cars moved slowly, about 8 mph along congested streets, and the horses’ waste “was a massive problem” because no formal department of sanitation existed yet, Lanceley said. While horse-drawn transport would continue, alternatives were on the way. 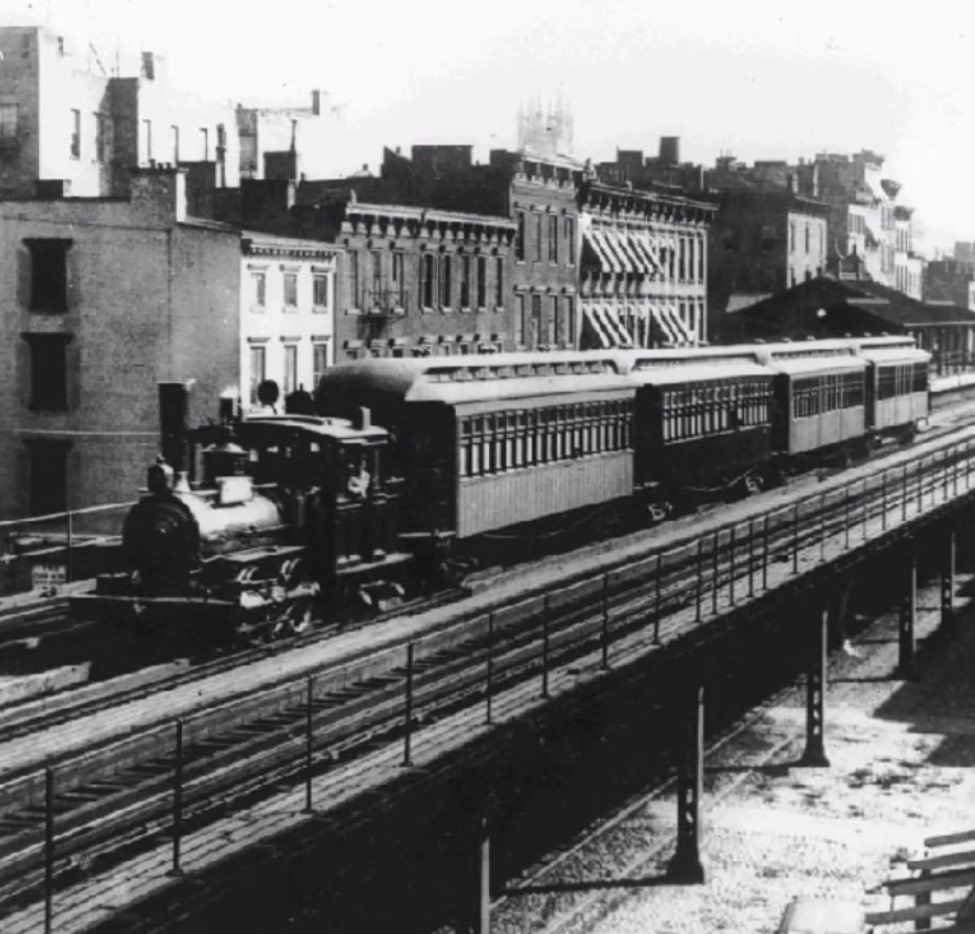 Steam-powered train in Manhattan, circa 1890

Next, the tour pulled in at New York of the 1870s, when elevated steam-powered trains began service in the city, providing a faster ride—12 to 15 mph along a dedicated right-of-way—and enabling riders to live in spacious uptown areas while commuting to lower Manhattan. But the trains spewed a lot of pollution, blocked the light on city streets, and “were incredibly noisy,” Lanceley said.

And they were vulnerable to the elements—as shown when a blizzard snarled the trains and immobilized riders in 1888. The disaster is credited with catalyzing the formation of a rapid transit commission that examined options for a subway, Lanceley said, adding that some elevated train lines would be incorporated in the subway system.

The First Subway Leaves the Station

Next, the presentation arrived at the founding of the city’s first subway line, built between 1900 and 1904, which began at City Hall and stretched up the east side of Manhattan. Lanceley noted that early trains had overhead fans, “considered a big improvement” at the time. “Today, we look at the fan in horror,” she said. “Imagine if you were really tall and you stretched.”

The subway’s electrified cars were made possible by the same technology that powered streetcars and trolleys, which posed safety concerns as they moved through city streets crowded with pedestrians. 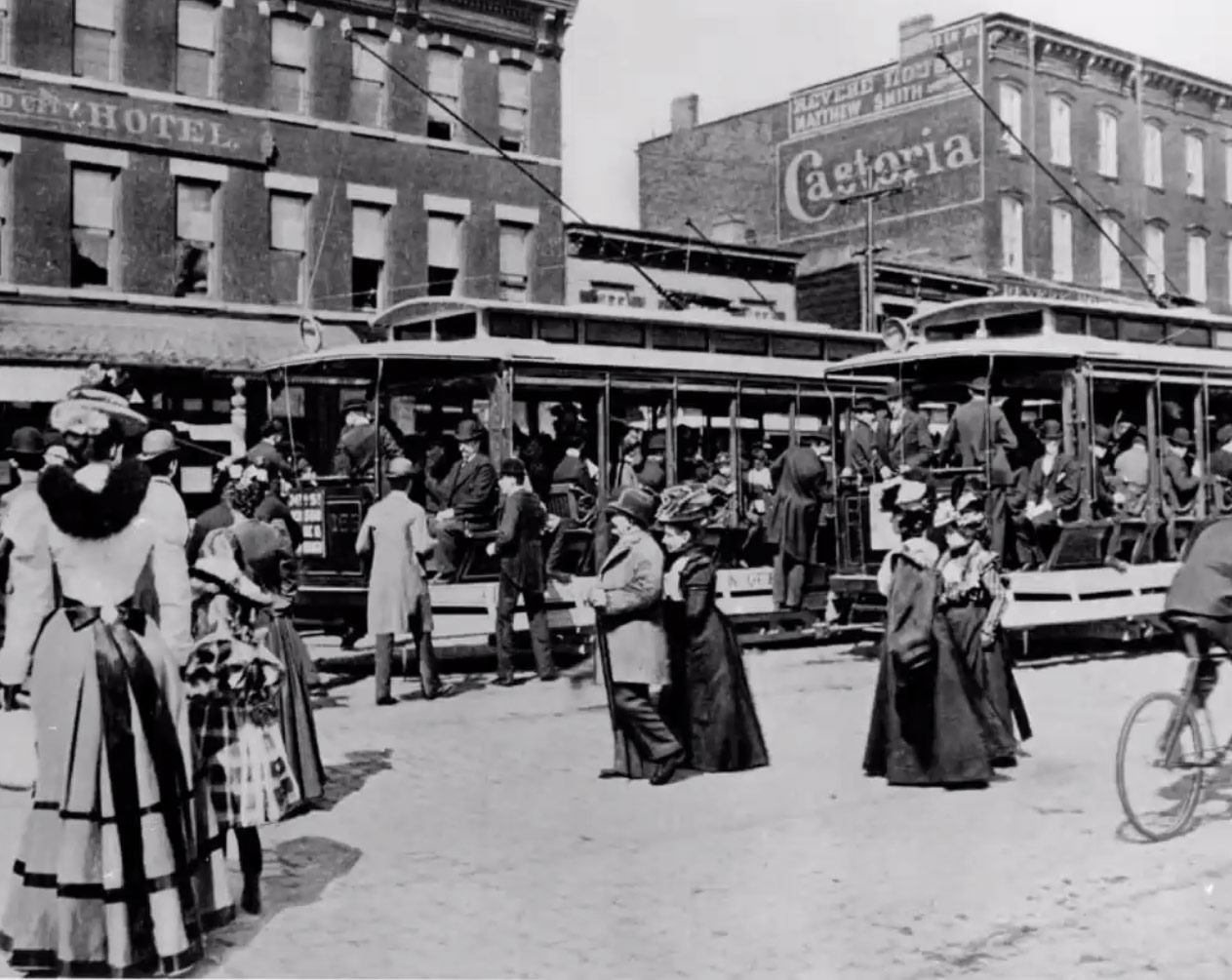 “Everybody is taking their lives into their own hands just crossing the street,” Lanceley said while showing a video from 1903 that appeared to be shot from a moving trolley. In fact, the dodging of streetcars was memorialized in the name of an iconic sports team, the Brooklyn Dodgers, Lanceley noted.

Also essential to the subway’s creation was the 1897 invention of multiple unit control, or putting a motor truck on each car, which allowed more cars to be strung together, since they didn’t all need to be moved by a single engine.

The final stop on the tour was present-day New York, where the work to make the subway system more efficient and accessible continues. The city has begun installing a signaling system using transponders to precisely locate trains so they can run more closely together, allowing more of them to be in service at once, Lanceley said. And the system also faces a formidable task in making all its stations accessible; right now, just 25 percent have elevators, she said.

Other work on the system highlights the looming issue of climate change, she said, describing upgrades to lower Manhattan subway stations to help them withstand storm surges like the one that devastated the South Ferry station during Hurricane Sandy in 2012.

The hurricane “was really a huge wake-up call for the transit system,” Lanceley said. “Rising sea levels are going to be an ongoing challenge.”

The city is also confronting climate change via changes to the bus system, which was expanded in Manhattan in the 1930s to provide a safer alternative to trolleys, she said. The expected switch to an all-electric city bus fleet by 2040 will not only reduce carbon pollution but also combat that other scourge of New York transit: noise.

That much was clear when she chatted with a driver of one of the new electric buses, Lanceley said: “She really emphasized just how quiet they are, compared with the old noisy diesel buses.”

Alumni attended the event from as far away as Texas and California, taking advantage of the virtual format that alumni relations adopted for cultural and entertainment events with the onset of the coronavirus pandemic. In-person cultural and entertainment events for alumni will resume in the fall, although virtual events will likely continue as well.