skip to main content
Return to Fordham University
You are at:Home»Fordham Magazine»In New Single, Hip-Hop Artist Voices Support for Black Lives Matter
Photo courtesy of Dayne Carter
In the wake of the May 25 police killing of George Floyd, Dayne Carter, FCRH ’15, knew he wanted to make his voice heard through his growing platform as a hip-hop artist.

Just a few days after Floyd, a Black man, died during an arrest in Minneapolis, with protests and calls for systemic change sweeping the country, Carter began texting with his longtime friend and fellow rapper, Franco Obour, about collaborating on a song to highlight their lived experiences as Black men and the personal and structural racism they’ve been exposed to throughout their lives. After three days of sharing lyrics and voice memos with each other and choosing an instrumental from producer eeryskies, Carter and Obour recorded their verses at a friend’s studio in Manville, New Jersey.

The resulting song, “What Do You See?” was released on June 12 on all major streaming platforms after initially being posted on Instagram and Facebook. Since then, Carter and Obour—a Rutgers dental student who performs under the name juneyouare and who grew up with Carter in Hillsborough, New Jersey—have received press from outlets including BroBible, Karen Civil, and Forbes. As part of its release, the two decided to donate all proceeds from the song’s iTunes purchases this year to Color of Change, a nonprofit civil rights organization that “leads campaigns that build real power for Black communities.”

“WHAT DO YOU SEE?” available now on all major streaming platforms. If you purchase the song via iTunes (link in bio) 100% of all proceeds earned will be donated to @colorofchange – a nonprofit that “designs campaigns to end practices that unfairly hold Black people back, and champion solutions that move us all forward.” This will be in effect the remainder of the year, and we will provide an update once the donation is made. Written: @ayodayne @juneyouare Mixed: @looncookitall Prod: @prod.eeryskies Cover Art: @shotbyjudeus Model: @deesociality

Over a laid-back, hypnotic beat that recalls the G-funk sound favored by West Coast rappers of the 1990s—like the often politically minded Ice Cube and 2Pac—Carter rhymes about both the frustrations of seeing articles and social media posts that downplay the racism experienced by Black people in America (“I do not come to a wake to debate what you been through”) and questions of ancestry and intergenerational trauma (“Look at my lineage/I’m a descendant of slaves/Somewhere in South Carolina/but I cannot find ’em/’cause they don’t have graves”).

“People seemed like they were losing track of the ultimate thing that happened, where this man lost his life and that could have been prevented,” Carter says. “It just felt very frustrating. It’s like, you don’t go to a funeral if someone’s relative passed and talk about, ‘Oh, well, we should be mourning my relative too.’ It’s like, hey, let’s focus together on what’s going on and try to fix it and find a solution.”

An Internship Becomes a Career

Carter’s interest in music dates back to sixth grade, when he performed with friends in a talent show, but he says he began to take things more seriously while at Fordham, where he majored in communication and media studies. After landing in the Bronx, where his father, Anthony—a 1976 Fordham College at Rose Hill graduate and current member of the University’s Board of Trustees—also studied, Carter set up recording equipment in his Loschert Hall dorm room (and later in O’Hare Hall and Campbell Hall) and earned a reputation as a musician on campus, getting invited to play at house parties, club events, and the University’s popular Spring Weekend concert. 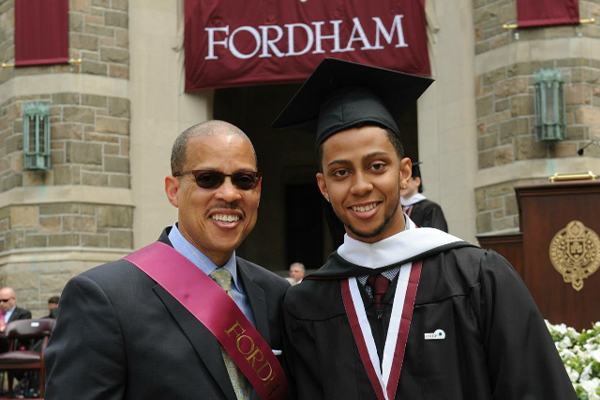 Carter with his father, Anthony, FCRH ’76 (left), at the 2015 Fordham College at Rose Hill diploma ceremony. (Photo by Chris Taggart)

While balancing his studies and music, in 2014, during his senior year, Carter also began an internship at the Robot Company, a sports and entertainment marketing firm founded by LeBron James and Maverick Carter. After completing his internship—the first one at the then-new company—Carter was offered a full-time position, and he has been with the firm ever since. In his current role as talent and influence manager, Carter works with brands, athletes, and influencers to find opportunities for collaboration.

A Growing Musical Platform, from NBA 2K to Australia

Meanwhile, Carter’s music career has continued to flourish. In May 2018, he independently released his debut album, Roadtrip, which has garnered more than 300,000 streams across major platforms. And this past December, two of the songs off Roadtrip, “G.N.S.L.” and “Pull Up,” were chosen to appear on the soundtrack for the hugely popular NBA 2K20 video game, appearing alongside both up-and-coming artists and established stars like Drake, Travis Scott, Cardi B, and Carter’s current favorite rapper, J. Cole.

“I grew up playing the game, and it’s still exciting every time [I] turn it on and hear my song come on shuffle in the background,” he says. “I would say almost every day, there’s someone new who DMs me like, ‘Yo, I heard your song on 2K. I live in London,’ or ‘I live in Australia,’ all these different places. So it’s cool to see that aspect.”

Looking ahead, after already releasing three new singles this year—“Made Men,” “Gassed Up,” and “What Do You See?”—Carter says he wants to continue to put out a new song every six to eight weeks. With what he calls “a vault” of unreleased music he’s been sitting on—and the marketing skills he’s acquired through his education at Fordham and his work at the Robot Company—he foresees having a promotional plan for each new song in order to gain continued traction with listeners. Having the ability to create his own media kits and knowing how to promote his music, Carter says, has made being an independent artist a viable path.

In writing and releasing “What Do You See?” Carter says he and Obour “had complete control of how we wanted to do it, where we wanted to put it out,” including the decision to donate proceeds to Color of Change.

With that kind of artistic control and freedom, Carter hopes that he can continue to inspire productive dialogue, saying that by releasing the song, he and Obour wanted to “make a statement and hopefully ignite a conversation.”

“It was just sending a message,” he says, “something I would talk about with close friends or keep to myself and trying to amplify that, knowing that there’s a platform that I have—and people, I think, would want to hear it.”