skip to main content
Return to Fordham University
You are at:Home»Fordham Magazine»Alumni News»In New Book and Podcast, Fordham Graduate Aims to Help Kids Tackle Climate Change
Photo courtesy of Olivia Greenspan
How do you talk with children about the destructive effects of climate change in a way that is honest and informative, and that helps them turn their feelings of anxiety into action?

That is the question that led Olivia Greenspan, FCRH ’19, and Zanagee Artis to write A Kid’s Book About Climate Change.

The two first connected a few years ago, after Greenspan read a New York Times article about Artis and his fellow co-founders of Zero Hour, a youth climate action group. Greenspan, a Fordham College at Rose Hill senior at the time, had been involved with environmental work on campus and in her native Connecticut, where she helped establish TILL, a community-based real estate development company focused on rehabilitating brownfield sites.

Over the next two years, they discussed how children learn about climate change and decided they wanted to provide parents and teachers with an effective way to reach young kids. Greenspan came across A Kid’s Company About, which had recently started a series of books to help young people understand tough topics, including racism. While she was reading A Kid’s Book About Cancer in a Connecticut train station, she was approached by a woman who said her husband’s oncologist had recommended the book for their grandchildren.

“That was a moment for me where I was like, ‘OK, this company understands that kids are capable of understanding a lot more than we give them credit for,’” Greenspan said.

She reached out to the company, and founder Jelani Memory told her they’d been wanting to publish a book on climate change. In Greenspan and Artis, Memory found authors with experience organizing communities, especially young people, to address climate change.

Action as an Antidote for Anxiety

A Kid’s Book About Climate Change, published last April and marketed as being for children ages 5 to 9, is sleekly designed and includes the kind of information that adults may find both eye-opening and useful in talking about the topic with kids.

It arrived amid growing concern about how climate change is affecting kids’ mental health, with studies showing young people struggling to cope with anxiety about climate change and a sense that governments aren’t doing enough to counteract it.

In the book, Gree 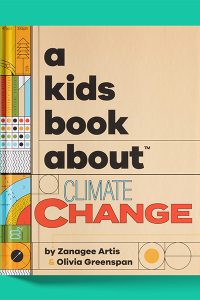 nspan and Artis trace how 250 years of industrial living have affected the Earth’s climate, using a metaphor of sickness to help kids understand those ill effects. And while they don’t shy away from the enormity of the problems caused by climate change, they also lay out some concrete ways that young readers can help alleviate those problems, offering visions of what a more climate-friendly future could look like, from alternative energy to a robust high-speed rail infrastructure.

“There’s definitely a through line in the book about ways to take action and reasons to be hopeful, and learning about actual solutions to the crisis,” said Artis, who is currently a senior at Brown University. “It’s about ways that kids can think about solutions on their own and ways that they can influence others to take action on solutions. And there’s a quote at the very end that I really like, which is that ‘the best antidote for anxiety is action.’ We really believe that.”

Greenspan noted that she and Artis had a climate scientist who works with youth, as well as a licensed mental health practitioner, review the manuscript to help them ensure it strikes the right tone for their audience.

Now, the two have their sights set on a slightly older audience. In November, they launched 1 Point 5, a podcast on climate justice. Greenspan said the 12-episode series, produced by A Kid’s Company About, will cover three main topics: what climate change is, intersectionality and climate injustice (i.e., how issues of race, gender, class, and other forms of identity affect and are affected by climate change), and solutions. They plan to interview activists, climate scientists, and policymakers, and they hope to reach teens and tweens, in particular.

“It’s just such a great challenge,” Greenspan said, “because I’m always trying to become a better communicator about climate science and climate justice, and there’s no greater challenge than trying to condense really complex information to the simplest possible language. It’s really teaching me a lot.”

An Economic Perspective on Environmental Work

While working on the book and podcast, Greenspan, who majored in economics and minored in psychology at Fordham, has also been working a full-time job as a performance analyst at Paradigm Capital Management and serving as a climate fellow at Martini Education & Opportunity Trust, founded by Fordham graduate Brent Martini, GABELLI ’86.

Greenspan met Martini a few years ago, when he was an executive in residence at the Gabelli School of Business and she was a member of Fordham’s Social Innovation Collaboratory, a network of students, faculty, alumni and others working to promote social innovation. The group instilled in her “great values of collaboration and teamwork,” she said.

Greenspan added that while some might think economics an unlikely major and finance an unlikely career choice for someone with a passion for environmental justice, the two fields have given her a valuable perspective on how to address climate issues.

“Majoring in and working in those fields gives me credibility and a great lens through which to look at problems like climate change,” she said. “At the end of the day, it has helped me in getting into rooms and meeting people who have helped me on my climate journey.”