skip to main content
Return to Fordham University
You are at:Home»Fordham Magazine»Features»In Maximum Security Prison, Educator Promotes Empathy Through Literature
Above: Steve Romagnoli near his home in Bushwick, Brooklyn. Photo by B.A. Van Sise. All other images courtesy of Bedford Hills College Program
It’s a Thursday evening near the end of the semester, and Steve Romagnoli, FCRH ’82, is leading his students through the moral ambiguities of Ruined, Lynn Nottage’s 2009 Pulitzer Prize-winning play about the wages of war in the Democratic Republic of Congo.

At the heart of the drama is a brutal irony: When rape is used as a weapon of genocide, a ramshackle brothel can be a haven.

The establishment in question is run by Mama Nadi, who profits from the women she protects—and from the war. She runs a business, she says, not a mission. She provides food and shelter, and in exchange, the women prostitute themselves to government and rebel soldiers alike, all of whom must check their ammunition at the bar.

“How many of you give her a pass?” Romagnoli asks his students, a group of 11 women. Opinions are split.

“I hated her at first, but by the end, I understood why she was the way she was, and why she did what she did,” one student says.

“Which of the philosophies we’ve discussed could you use to support defending her?” Romagnoli asks.

“Utilitarianism,” suggests one student. Romagnoli nods. “And what would Kant say? Is there a redeeming element in her behavior?”

“It’s wrong to use people the way she did,” one woman says emphatically; several others agree. “OK,” Romagnoli smiles, “we have some Kantians here too.”

To an outside observer, the discussion could have been part of an undergraduate seminar on any college campus—with one exception: Each student wore a green uniform that marked her as an inmate of Bedford Hills Correctional Facility, the only maximum security women’s prison in New York state.

Romagnoli, a playwright, novelist, and short story writer, has been teaching at Bedford Hills since 2015. Like all guests at the prison, he enters the compound through a trailer-like structure that separates the visitors’ parking lot from the prison buildings, which are ringed by metal gates topped with razor-wire coils. He passes through a security checkpoint carrying only his car keys, driver’s license, and notes for class.

“It’s like going in and out of a concentration camp, with the walls and the wires,” he says. “But sitting in the room and watching them talk and laugh and banter, you could be anywhere.”

Romagnoli’s students range in age and experience. For one woman, the course—Social Issues in Literature—is her first taste of college; for another, it’s the next-to-last class on the path to earning a bachelor’s degree in sociology. 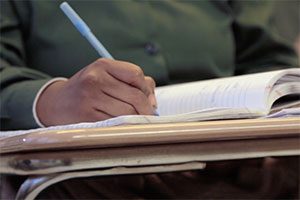 In addition to studying Ruined, they read and discuss a broad range of books, including Night, Elie Wiesel’s account of the Holocaust, and Zora Neale Hurston’s 1937 novel Their Eyes Were Watching God. They also screen several films, including Do the Right Thing, and Romagnoli introduces them to philosophers from Socrates to Simone de Beauvoir.

“Steve is always in demand,” says Aileen Baumgartner, FCRH ’88, GSAS ’90, the director of the Bedford Hills College Program, which is overseen by Marymount Manhattan College and offers courses leading to an associate’s degree in social sciences and a bachelor’s degree in sociology.

“Students really get a lot from his classes. I don’t know how he does it—I’ve said, ‘Really, Steve? You think they’re going to get through all this in a semester?’ Somehow or other they do.”

‘Students Have to Feel There Is Love’

For the past several years, Romagnoli has also been an adjunct professor at Fordham, where he teaches a similar course on ethics and literature, he says, albeit with a more sensational title: Murder, Mayhem, and Madness.

In both settings, students focus on “moral dilemmas and ethical questions that confront us throughout our lives,” he says.

“The Fordham students have great things to say, but they’re initially a bit shy. At the prison, sometimes you’ve got to pull them together, but they’re totally engaged, and they say what they’ve got to say.”

Romagnoli began his career as an educator at P.S. 26 in the South Bronx during the mid-1980s, not long after earning a bachelor’s degree in English at Fordham. He later earned an M.F.A. in creative writing at the City College of New York.

For 15 years, he was an itinerant teacher for the New York City Department of Education, working with students in their late teens to early 20s at drug rehabilitation facilities, homeless shelters, and halfway houses, among other locations.

“I would go in and teach a lesson and go out,” he says. “Engage them, that was the whole thing. You’ve got to engage them.”

He says that no matter where he’s taught, his approach is essentially the same. “Students have to feel there is love there—not love love, but a deep respect. And if they come to the conclusion, consciously or unconsciously, that you have that deep respect, then it allows you to be as demanding as you want to be.”

It’s a lesson Romagnoli learned decades ago, particularly at Wadleigh High School in Harlem. He taught English there starting in 1993, later served as dean of students, and, although he had no prior coaching experience, was appointed head coach of the school’s fledgling boys’ basketball team. In 1998, he led the team to an undefeated season, capped by a victory in the Public Schools Athletic League B Division championship game at Madison Square Garden.

“He became a coach by chance, but turned players into students by design,” the Daily News reported at the time, adding that Romagnoli “took on the kids as he took on their problems: truancy, drugs, death, violence, poverty, fatherlessness, the entire roster of urban ills that puts teenagers ‘at risk.’”

He’s still in touch with his former players, who now joke about how strict he was at the time. “I felt that to succeed they needed a certain amount of rigor and discipline that they really didn’t have,” he says. “But they saw that I was in the gym with them after school and that I lived in the neighborhood. That definitely makes a difference.”

‘When They Get to Class, They’re Motivated’

At Bedford Hills, Romagnoli is helping to turn inmates into students, although he insists that the women in the college program don’t need much coaxing.

“They just live for this,” he says. “They know it’s not something that’s guaranteed. Some of them have had to get their GED” before they could even apply to the college program. “When they get to class, they’re motivated, they’re good to go.”

Baumgartner notes that all of the students at Bedford Hills are required to work during the day—as porters or clerks or sweeping floors, for example. And they complete their coursework in the evening and early morning hours without the benefit of internet access. 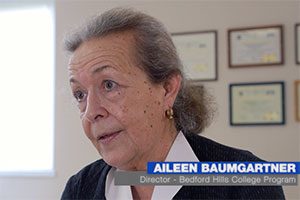 Baumgartner, shown here in a still from a Bedford Hills College Program video, has been directing the program since late 2002.

Like Romagnoli, Baumgartner is a Fordham graduate. She earned bachelor’s and master’s degrees in English at the University. In 2001, she was a professor at Mercy College when she started teaching at Bedford Hills.

“I had never given any thought to prison education programs at the time,” she says, recalling that on her first day of class, “all the students were looking at me, sizing me up, and they asked, ‘Why are you here?’ ‘I was asked to teach, and so here I am.’”

Baumgartner, who has been the director of the college program since late 2002, says that her straightforward answer satisfied the students, who, she realized, didn’t want to “hear someone come in and talk to them about high-minded ideals.”

Still, she is quick to extol the benefits of prison education programs, citing data about lower recidivism rates and better employment opportunities for former inmates who have a college education.

Baumgartner also speaks of individual and communal benefits of prison education that are less tangible, noting that students in the college program learn that “the world is wider.” 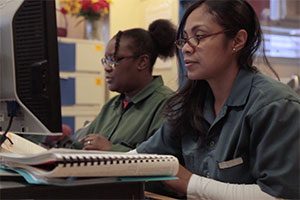 Students complete their coursework in the College Learning Center, which has a computer lab, library, and an area for students to meet with professors.

“And then there’s that ripple effect: They’re concerned with their children going to college. Now it matters to them.”

Approximately 150 women are currently enrolled in the college program, which Baumgartner says constitutes about 25% of the standing inmate population at Bedford Hills.

Every spring, the program hosts a graduation ceremony. “It’s a big one for us this year,” she says, noting that six women will be getting a bachelor’s degree and 14 will receive an associate’s degree in June.

Inmates at Bedford Hills have benefited from college education programs for decades. “Mercy College had a college program there until the tough-on-crime bill was passed,” Baumgartner says, referring to the Violent Crime Control and Law Enforcement Act of 1994, which eliminated Pell Grants for inmates.

“Across the country, a lot of colleges, including Mercy, closed their prison programs in the mid-1990s because they just couldn’t afford it” without federal funding, Baumgartner says, noting that the total number of prison college programs in the U.S. dropped from about 300 to just a handful at that time.

At Bedford Hills, a coalition of community members—including Elaine Lord, the superintendent at the time; Regina Peruggi, then president of Marymount Manhattan College; and Judith Clark, an inmate at Bedford Hills—formed a committee that designed the Bedford Hills College Program. It opened in spring 1997, and since then, more than 200 women have earned college degrees there. 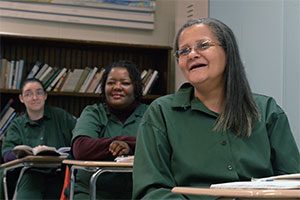 Approximately 150 inmates at Bedford Hills are currently enrolled in the college program.

Today, the college program is funded by private donors and grants. And since 2016, Bedford Hills has received some additional support through the Department of Education’s Second Chance Pell Pilot program, which aims to “create a fairer, more effective criminal justice system, reduce recidivism, and combat the impact of mass incarceration on communities.”

In announcing the three-year experimental program, which is testing the effectiveness of making Pell Grants available to incarcerated people again, the Department of Education cited a 2013 Department of Justice-funded study by the RAND Corporation; it found that “incarcerated individuals who participated in correctional education were 43 percent less likely to return to prison within three years than prisoners who didn’t participate in any correctional education programs.”

Baumgartner credits the New York State Department of Corrections and Community Supervision (DOCCS) for supporting higher education programs in prisons, including the program at Bedford Hills. “These programs sometimes tax their resources,” she says, “but DOCCS understands the importance of higher education in reducing recidivism and enriching the lives of inmates while incarcerated and upon their release.”

Romagnoli says he talks with his Fordham students about his work at Bedford Hills, and about mass incarceration and criminal justice reform. “It resonates strongly with them,” he says. “And it’s something that’s really come into the public consciousness [in recent years]; the ball’s rolling a little quicker.”

Back in the classroom at Bedford Hills, after the heavy but lively discussion about Ruined, Romagnoli gives the students a brief break. Some of them take the opportunity to reflect together, for the benefit of a guest, on the course.

They say they’ve learned that “knowledge is power,” that “perception plays a big role in how people judge people,” that the readings have helped them “gain different perspectives,” and yet the class “brings a unity, even if we agree to disagree.”

“You learn more about yourself through the process, about your ethical system, and you question the things you do,” says one student. “I am one class away from a B.A. When I leave, I will always question the morality of a situation.”

The images in this story are taken from a 2017 video produced by Marymount Manhattan College professor Erin Greenwell in honor of the Bedford Hills College Program’s 20th anniversary.