skip to main content
Return to Fordham University
You are at:Home»Fordham Magazine»Features»In Hong Kong, Filmmaker Turns the Lens on Himself
Photo by Robert Scherle

While getting his master’s in media management at Fordham, Andrew Hevia, GABELLI ’15, earned a Fulbright fellowship to visit Hong Kong and make a documentary about the Art Basel fair and its effect on the city. He had previously made Rising Tide, a film documenting the fair’s impact on Miami, which aired in 2012 on a Florida PBS station.

When he arrived in Hong Kong, though, he realized he had underestimated the obstacles: a language barrier; an unfamiliarity with the city, especially compared to his native Miami; and a lack of access to some of the people whose stories he wanted to tell.

The resulting film, Leave the Bus Through the Broken Window, is a personal travelogue that highlights the senses of disorientation, loneliness, and wonderment that come with being a stranger in a strange land. It premiered in Austin at the South by Southwest film festival in March, and was screened on June 18 as part of the Brooklyn Academy of Music’s BAMcinemaFest.

In the film, which he shot entirely himself on a digital SLR camera and an iPhone, Hevia navigates Hong Kong—both within the context of Art Basel and outside of it—while grappling with the aftermath of a breakup and the difficulties of getting settled into his new home for 10 months. He winds up living in a space not much bigger than a closet with a loft bed, gets lost in an enormous indoor shopping mall, and seeks out, with varying degrees of success, local artists he can follow through Art Basel. The handheld camerawork and interposed shots of art galleries and street scenes (including footage from a protest in the wake of the city’s 2014 Umbrella Movement) give Leave the Bus Through the Broken Window a frenetic pace that leaves the viewer wanting to know more about everything they see. 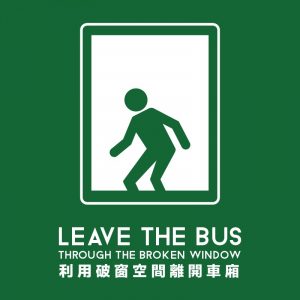 Hevia said during a Q&A session following the BAM screening that many of his artistic choices in the film—including not shooting any clips longer than 10 seconds, making 10 months’ worth of footage feel like a compressed length of time, and using a speech-to-text robotic voice to deliver the second-person voiceover narration—were in service of finding a narrative that reflected his unsettled experience.

A text-to-speech robotic, second-person voiceover, for instance, “destabilized the ground, which reinforced the feeling I had in Hong Kong,” he said.

There were practical considerations, too. By not allowing himself to shoot any clips longer than 10 seconds, he not only cut down the amount of footage that he’d need to sort through, but he often appeared to be taking still photographs, giving him more freedom to shoot video in places where such activity is generally prohibited. After returning to the U.S., his editor and co-producer, Carlos David Rivera, helped him find the emotional center of the footage he had shot, acting as “part editor and part therapist,” Hevia said.

While he plans to continue writing and directing his own films—his next project, he says, will be his wedding video, which he hopes “strangers will want to watch on purpose”—Hevia also keeps busy with his work as a producer. He co-produced the Academy Award-winning 2016 feature Moonlight and now works full-time as North American vice president of Fabula, the Chilean production company founded by brothers Juan de Dios and Pablo Larraín.

With both his directing and producing work, Hevia says the Gabelli media management program was instrumental to getting him where he is in his career—not only through the Fulbright fellowship he won with the help of Fordham’s Office of Prestigious Fellowships but also through courses on the ever-shifting media landscape.

“Prior to Fordham, I felt like I had a grasp on what it took to make a film and how,” he explains. “What I was missing was a broader understanding of the why. The year I graduated film school [at Florida State University]was also the year YouTube launched, which heralded a seismic shift in content creation. Fordham gave me the tools to understand and engage with the new reality.”

Check the film’s official website for information on future screenings and watch the trailer below.