skip to main content
Return to Fordham University
You are at:Home»Fordham Magazine»Features»In Debut Novel, a Fordham Graduate Imagines Our Climate Future, Five Different Ways
Photo courtesy of Andrew Dana Hudson
Business leaders, economists, political consultants, and military planners often use scenario thinking to prepare for what lies ahead and test possible courses of action—or inaction. For Andrew Dana Hudson, FCLC ’09, it’s a practice tailor-made for speculative fiction, one that influenced his debut novel, Our Shared Storm, which was published by Fordham University Press in April.

Our Shared Storm tells the overlapping stories of four characters as they play out in five different future scenarios. Each of the five parts of the book takes place in the year 2054 in Buenos Aires, Argentina, at the United Nations Framework Convention on Climate Change’s Conference of the Parties—better known as the COP—as a superstorm approaches. The characters’ roles, motivations, and actions differ, though, as a result of how their worlds have dealt or failed to deal with the effects of climate change.

There’s Diya, whose job is different in each story, but who is consistently a power player within the world of climate negotiations. There’s Luis, a Buenos Aires local who exists around the periphery of the conference, from being a driver in one story to a kidnapper in another. There’s Saga, a climate activist (and in one story, a pop star) whose level of pessimism—and comfort—in dealing with government delegates oscillates from part to part. And then there’s Noah, whom Hudson described as his “personal id,” a mid-level U.S. delegate (or, in the same story as pop star Saga, an exploitative entrepreneur) who has limited control over his country’s commitments but who does what he can to grease the diplomatic wheels. 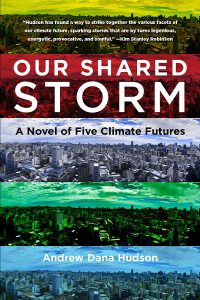 In a blurb for Our Shared Storm, the celebrated science fiction writer Kim Stanley Robinson wrote that Hudson succeeded in finding creative ways to explore those swerves and the worlds that led to them.

“Hudson has found a way,” Robinson wrote, “to strike together the various facets of our climate future, sparking stories that are by turns ingenious, energetic, provocative, and soulful.”

The book’s futures are based on a set of climate-modeling scenarios called the Shared Socioeconomic Pathways, or SSPs, which were developed by climate experts in the 2010s and used in the United Nations Intergovernmental Panel on Climate Change’s sixth assessment report in 2021. The scenarios range from “Sustainability,” in which aggressive climate goals are met and a more utopian future takes shape, to “Middle of the Road,” a continuation of current trends of inequality and consumption, to three more dire possibilities—“Regional Rivalry,” “Inequality,” and “Fossil-Fueled Development”—each of which would bring its own variety of high-level threats.

Hudson came across the SSP framework after starting the master’s degree program in sustainability at Arizona State University’s Global Institute of Sustainability and Innovation in 2017 and realized that it laid out scenarios for the future much in the same way that so much speculative fiction does, and in this case, with the explicit backing of scientific research.

“As soon as I read about [the SSPs], I was like, ‘Oh, these are science fiction stories,’” he recalled.

After visiting the International Institute for Applied Systems Analysis (IIASA) in Vienna, which houses the SSP database, and meeting with scholars there to talk further about their research, Hudson realized that by writing five futures set in the same time and place with the same characters, he could eliminate variables and make it a kind of experiment.

“Originally,” he said, “a big part of the way I framed it as a master’s thesis was, ‘I’m going to do practice-based research to analyze my own experience writing these stories and figure out just how hard or easy it is to create literature based on scientific models and rigorous ideas about the climate.’”

Then, in December 2018, a member of his thesis committee at ASU, Sonja Klinsky, arranged for him to be part of the university’s observer delegation at COP24 in Katowice, Poland. Attending the conference, and thinking about the storytelling possibilities of a hypothetical climate event affecting that kind of event, helped him flesh out the book’s structure.

In the book, the storm is very strong and causes damage in each scenario, but local and global communities’ ability to deal with that damage—and the levels of suffering and violence that go with it—vary widely.

An Intellectual Journey and a Speculative Movement

Hudson grew up in St. Louis and moved to New York City to enroll at Fordham College at Lincoln Center, where he majored in political science with a minor in creative writing. He also was the opinions editor for the The Observer, the award-winning student newspaper at the Lincoln Center campus.

“The Observer, doing the opinions page, writing a column—all those things definitely were steps on my intellectual journey … of being really keen on stories about arguments,” Hudson said. “And I think discovering that I liked talking to people about their writing was a big discovery that happened there.”

After graduating in 2009, he spent a year working as a journalist in India, where he had studied abroad as a Fordham undergrad, and when he got back to the States, he became a reporter at the St. Louis edition of Patch. From there, he moved to the San Francisco Bay Area, where he did freelance writing and political and nonprofit consulting.

In 2015, Hudson wrote an essay called “On the Political Dimensions of Solarpunk,” which laid out the practical implications of an aesthetic movement that portrays a utopian future in which solar energy is harnessed creatively to build beautiful, sustainable cities and communities. Like the dystopian cyberpunk genre before it, solarpunk is more than just an art movement—it was meant to portray real possibilities for how the world might look in the future.

When trying to define the term in the essay, Hudson wrote, “Let’s tentatively call it a speculative movement: a collaborative effort to imagine and design a world of prosperity, peace, sustainability, and beauty, achievable with what we have from where we are.”

Hudson met, around that time, another writer and futurist thinker, Adam Flynn, who in 2014 had written an essay on solarpunk. The two co-wrote a short story, “Sunshine State,” that won the first Everything Change Climate Fiction Contest sponsored by ASU’s Imagination and Climate Futures Initiative. Seeing the work that was taking place there led Hudson to apply to the university’s sustainability master’s program, from which he graduated in 2020. In addition to his work as a fiction writer, Hudson has stayed on as a fellow at the Center for Science and the Imagination’s Imaginary College, which partners with individuals and groups “advancing [the] mission of fresh, creative, and ambitious thinking about the future.” The college counts Robinson among its resident philosophers, along with other notable writers like Margaret Atwood, Neal Stephenson, and Bruce Sterling.

And while Our Shared Storm began as his master’s thesis, with its publication by Fordham University Press, Hudson hopes that it can help a wider audience see that we still have options for what our climate future will look like.

Science Fiction as an Impetus to Action

While Hudson does believe that speculative fiction can help people imagine a brighter future, he said stories alone can’t save the world.

But without massive organizing and political action, Hudson believes, “we could figure out how to communicate this to the public in a really effective way and still lose.”

Our Shared Storm touches on the conflicts that often arise when people and communities want to effect change—is it easier to accomplish goals through established political systems or through grassroots work that doesn’t rely upon state action?

Hudson has described solarpunk as a countercultural movement. “It should not be about the people in power,” he said recently. “It should be about the people who are not in power, who are sort of challenging those systems.” But after witnessing firsthand—and writing about—the geopolitical mechanisms that dominate spaces such as the annual COP meetings, he has come to appreciate the need to work within traditional political and diplomatic systems.

“I think learning how the institutions work—the national, local, and state governments that are trying to implement the treaties—and then kind of inserting yourself into those processes can be really powerful,” he said. “The stories are there to help people understand these dynamics and institutions, and help them get a little smarter about policy, get a little more strategic about where they put their efforts, [so they’re] not going to get taken for a ride.”

In Our Shared Storm’s most optimistic story, a strong labor movement is key to influencing government policy, and while he acknowledged that there is no one easy solution, Hudson believes that the working class uniting—and pushing for things like a Green New Deal through general strikes—has the potential to positively shape the path ahead.

So, with the scenarios laid out, and with some ideas about the actions necessary to avoid the worst-case ones, what kind of climate future does Hudson see us moving toward? That kind of prognosticating, he insisted, is not part of his project.

“What I was interested in was how we’re shaped by opportunities and material conditions,” Hudson said, harking back to his characters’ changing circumstances and swerving fates.

“All these things that I think end up shaping our lives—those were kind of the pivot points that I wanted [to show readers]. The point being that climate and the investments we make to deal with it are going to be a big factor in shaping those pivot points for billions of people.”