skip to main content
Return to Fordham University
You are at:Home»Fordham Magazine»Features»Illuminating the World’s Oldest Church 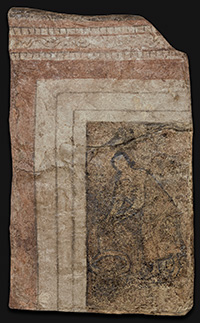 The Woman at the Well: This may be the oldest existing image of the Virgin Mary, according to Michael Peppard. He also contends that the women depicted in the image at the top of this post are processing to a wedding and not a funeral, as scholars previously believed. Images courtesy of Yale University Art Gallery

A Fordham scholar shines new light on Christianity’s formative years in Syria, where Islamic State militants are looting and seeking to destroy the country’s past.

To get a sense of how the earliest Christians approached their faith, just look at the art they left behind. In January 1932, an international team of archaeologists unearthed several frescoes in Dura-Europos, an ancient walled city along the banks of the Euphrates River in southeastern Syria, near the Iraq border. The paintings—including some of the earliest-known depictions of Jesus—had adorned the walls of what scholars soon realized was the oldest known house of Christian worship in the world.

Established around A.D. 240, when Christians were still a persecuted minority in the Roman Empire, the church didn’t thrive for long. By 256, a Sasanian army had destroyed the border city, leaving the site abandoned for centuries.

A Cultural Heritage at Risk

By the 1930s, Dura-Europos had come to be known as the “Pompeii of the Syrian desert.” In addition to the church, archaeologists found evidence of a multilingual, multicultural society. They discovered one of the world’s oldest synagogues, temples to Greek and Roman gods, shrines to Sumerian and Syrian goddesses, and many well-preserved artifacts of daily life.

Today, however, the city’s ruins lie in territory controlled by Islamic State militants, who loot archaeological sites to generate revenue and attract attention. They’ve also put Christians and others in mortal peril as Syria’s civil war drags on.

For much of the past five years, Michael Peppard, Ph.D., associate professor of theology at Fordham, was working on a book about the excavation and interpretation of the Dura-Europos church—a site he was unable to visit due to the ongoing war. “Until about a year ago, the main question [people asked me] was, ‘What new is there to say about such an old discovery?’” he wrote in America magazine last January, when his book, The World’s Oldest Church: Bible, Art, and Ritual at Dura-Europos, Syria, was published by Yale University Press. “But now the first question everyone asks is, ‘What has happened to the site—did they … destroy it?’”

The answer, he wrote, is “both no and yes.” Many artifacts were removed decades ago, and several panels of the church frescoes are on display at Yale. But satellite photos have shown extensive looting, “which all but destroys [the site] for future archaeological purposes.”

The Cradle of Christianity

The cultural and human tragedies of the war were never far from Peppard’s mind as he worked on the book, which he dedicated to “the people of Syria, the cradle of Christianity.” In the book, he transports readers to Christianity’s formative years, combining theology and art history to prove that there are, in fact, new things to say about “such an old discovery.” He makes the case for a completely different understanding of several images from the site, most notably the image of a woman at a well.

Since the 1930s, almost everyone has assumed that she is the Samaritan woman from the Gospel of John, and that she symbolizes baptism, as represented by the “living water” of the well. Peppard contends that the painting is actually a portrayal of the Annunciation, “when Mary is told she is going to bear a son as a virgin.” He notes that Byzantine images of that scene, though produced much later, bear “an arresting formal resemblance” to the figure from Dura-Europos.

“If the image is the Virgin Mary, then not only is it probably the earliest datable image of Mary, but it’s also going to change the way we interpret the artistic program of this church,” Peppard said. The image of women processing, wearing white veils and carrying torches, has likewise been misidentified as a funeral procession, he said, when in fact it’s a wedding procession.

The Hope of a Spiritual Rebirth

Taken together, the paintings illustrate that these Christians emphasized empowerment, healing, and marriage more than death and resurrection. This isn’t surprising, he said, because “in this earliest Christian church, we don’t have any imagery of the resurrection. I think they certainly believed in it, and that it was part of their faith in who Jesus was and what it meant to be a Christian, but it’s a matter of emphasis.” For Peppard, the frescoes are ultimately about the “hope of new spiritual birth,” particularly in light of the ongoing war in Syria.

They’re “much more than museum pieces,” he wrote last January in a New York Times article on his research. “They illuminate a people and heritage that need salvation.”