skip to main content
Return to Fordham University
You are at:Home»Fordham Magazine»‘I Never Did It Alone’: Former NFL Kicker Patrick Murray Shares How Family and Community Have Shaped His Life
Patrick Murray, GABELLI ’13, meets with fans after a Tampa Bay Buccaneers game. Photo provided by Murray
Family. Football. Fordham. These have been the hallmarks of Patrick Murray’s life, from his family’s Gaelic football roots, which fed his interest in sports even before he could walk, to his three-season career in the NFL and beyond. Now a client services associate at UBS, the 2013 Gabelli School of Business graduate and former pro kicker recently started a family of his own, but his alma mater—and its football program—remain close to his heart. And he’s determined to pay forward the support and encouragement he’s received.

“It’s such a unique bunch of guys from all different walks of life, and they’ve gone on to do some incredible things,” Murray said of his former teammates. “And we pride ourselves on staying connected and helping those that have not only come before us but also will come after us as well. It’s a real fraternity there, and the bond is strong.”

Mapping Out a Plan with Family Roots

Sports were a big part of Murray’s childhood in Mahwah, New Jersey, where he lived with his mother, Irish-immigrant father, and brother. His father taught him how to kick a ball before he learned to walk, he said, and he went on to play soccer and Gaelic football, as well as a bit of baseball to “assimilate into the American culture.”

Growing up, Murray said they weren’t just sports crazy in his house, they were family crazy, too. “My [mom’s parents] lived a couple of blocks away from us, and we would be on the phone back to Ireland once every week, or once every two weeks,” he said. His family still visits Ireland regularly, at least once a year (barring a hiatus when COVID-19 paused international travel). During those summer trips as a kid, Murray didn’t just catch up with family and friends; he spent a lot of time training.

“It was funny: I’d get these very interesting looks as a 13-, 14-year-old kid kicking an American football in some of the most famous [Gaelic football] stadiums in Ireland,” he said. The training paid off. Murray enrolled at Don Bosco Preparatory High School, a private, all-boys Roman Catholic school in Ramsey, New Jersey, where he played football.

“We went on to win three state championships, we were nationally ranked every year, playing on ESPN, really getting a lot of great notoriety,” Murray said. Despite his proven skill, Murray was undersized for a football player—”or so a lot of college coaches told” him—so recruitment for college football was “slow to none.” His mother, Linda, a 1986 Fordham College at Rose Hill graduate, made a natural suggestion: Why not check out Fordham? The pair visited the Rose Hill campus, Murray introduced himself to the coach, and they “made it happen,” he said.

“Made it happen” may be a bit of an understatement: Now a member of the Fordham University Athletics Hall of Fame, Murray was a consensus All-American placekicker in 2012, his senior year. He holds Fordham’s record for punting average in a season and is ranked fourth on the University’s list for career field goals made.

During the Hall of Fame induction ceremony in 2019, Joe Sullivan, FCRH ’14, one of Murray’s former teammates, said the kicker “had a big leg,” but he was known for his humility and for overcoming adversity.

“Pat was always good, but he wasn’t an NFL-ready player when he got to Fordham,” Sullivan said. “In fact, during his junior year, he missed a few kicks and the coach decided to bench him … but instead of letting it get to him, he let it drive him. He finished up the rest of that year with one of the greatest punting performances in the history of Fordham football.”

Murray’s senior year, he regained the starting position and “had one of the most prolific kicking seasons in the history of college football,” Sullivan added. “His character was always his greatest attribute.”

Life in the NFL—and Beyond 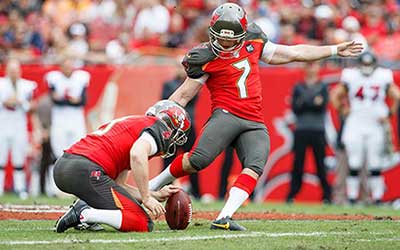 Patrick Murray during a game with the Tampa Bay Buccaneers.

Shortly after graduating from Fordham with a degree in finance in 2013, Murray got his NFL break. Though he was invited to mini-camp with the Chicago Bears, the team released him in favor of Pro Bowler Robbie Gould, who had been the team’s kicker since 2005. Murray spent the rest of the 2013 season working out “for, gosh, at least one team every week” until the very end of the year, when the Tampa Bay Buccaneers brought him back for a second tryout and signed him.

“In training camp that summer, I was perfect,” he said. “I made all my kicks and I beat out the incumbent and had a fantastic rookie year.” Unfortunately, the 2015 preseason saw Murray receiving his first of two career-shortening injuries and, after shuffling to the Cleveland Browns and back to Tampa Bay again, the kicker decided to “move on with the rest of [his]life” and start looking for jobs.

Cue 2020 and a global pandemic, though, and Murray wasn’t getting the callbacks he wanted. He “was a little downtrodden,” but he wasn’t at a loss: When he joined the National Football League, Murray had adopted a mantra—the NFL, he told himself, also stands for “not for long.” And so he vowed to continue his education. He enrolled in the online MBA program at the Kelley School of Business at Indiana University, taking advantage of a partnership between the school and the NFL Players Association that enables current and former NFL players to pursue a graduate business degree.

“You have access to some incredible faculty, and it’s an opportunity to have an advanced degree paid for because of what you did during your time within the NFL,” he said. “So for me, it was a no-brainer.”

Murray hasn’t completely left professional sports behind. As a client services associate in UBS’ Tampa, Florida, office, he helps to expand the firm’s footprint with athletes and entertainers.

“I believe it’s been a unique career, however, a very rewarding career that has allowed me to gain a lot of different skill sets,” he said.

Murray, who lives in Florida with his wife, Sara, and their 1-year-old daughter, Ellie, tries to make it back to Fordham as much as he can. Just this week, he was slated to participate in the 2022 Gridiron Golf Outing in Eastchester, New York, with Fordham football coach Joe Conlin, but the event has been rescheduled for May. Once the Rams football season starts on September 1, Murray plans to make the trek up to attend some games, including perhaps the Homecoming game on Saturday, September 17.

Murray said one of the reasons he comes back to campus is to serve as a resource for current student-athletes. It’s a privilege that he said was afforded to him as a student, and one he’s eager to pay forward.

“My whole life, it hasn’t just been me out there,” he said. “I’ve had help along the way—from a fantastic upbringing by my mother and father to a great training partner in my brother to all of the people that I competed against. And the foundation that was built from those early years of playing baseball or playing Gaelic football or playing soccer, culminating in running out onto the field on Sunday to represent a professional sports organization, I never did it alone.”

And he doesn’t expect Fordham’s up-and-coming athletes to do it alone, either. That’s why, he said, he wants to be there for them. He said players can ask Ed Kull, Fordham’s director of intercollegiate athletics, or any of their coaches for his phone number, and he’ll answer.

Murray added that his open-door policy isn’t just for questions about football or business, it extends to all of life, including mental health issues, which he feels need more attention.

“It’s a topic that needs to be discussed more—not only among men. … Pretty much everybody has something that they’re battling,” he said. “Call me up. We’ll have a chat,” he said he tells student-athletes. “I think if there were more open-door policies, we could help out a lot of people.”

What are you most passionate about?
This one is easy. Family. My family means everything to me. They are the reason I strive to be at least 1% better each and every day. My amazing wife and my beautiful daughter have given me so much in life, and I truly cannot imagine my world without them. I am so lucky to be a girl dad!

What’s the best piece of advice you’ve ever received?
It’s not happening to you; it’s happening for you. I have had trials and tribulations, just as anyone else has, and the most important lesson I have learned is that feeling bad for yourself does not usually solve the problem. I have learned to take these times of struggle and turn them into learning opportunities, and that has made a huge difference in my life.

What’s your favorite place in New York City? In the world?
Wow, this is a tough one! In New York City, it would have to be the Bethesda Fountain, which is where I asked my wife to marry me, or the Long Hall pub in midtown. The Long Hall has the best pint of Guinness outside of Ireland, and it is one of my first stops every time I come back!

In the world, it is Ireland. Being Irish is a massive part of who I am. I would not have accomplished the things I have without the Irish influence in my life. From playing Gaelic football as a kid in the Bronx to kicking points in the NFL, Ireland’s culture and history have truly left their mark on me.

Name a book that has had a lasting influence on you.
I have two: What They Don’t Teach You at Harvard Business School by Mark McCormack is an easy read and filled with incredible knowledge from one of the most successful entrepreneurs of all time. And The Choice by Philly McMahon. This book is written by a Gaelic footballer who was born on the “wrong side of the tracks,” shall we say. Through his own heartache of watching his brother suffer with addiction, he learned valuable life lessons that shaped him into one of the best athletes of his time and a budding fitness entrepreneur.

Who is the Fordham grad or professor you admire most?
This may be cliché, but it has to be Vince Lombardi. If you have not had the chance to read When Pride Still Mattered [David Maraniss’ biography of the 1937 Fordham graduate], I highly recommend picking it up. His life, his time at Fordham, his time at West Point, and in the NFL are all incredibly unique and show why he is regarded as one of the best coaches in football history.

What are you optimistic about?
I try to approach each day with a sense of optimism knowing that my actions can cause happiness in others’ lives. I strive to do the right thing and treat people how I would want to be treated and, in turn, I hope I can provide some sense of optimism and happiness to those around me.