skip to main content
Return to Fordham University
You are at:Home»Fordham Magazine»Features»Humanizing Medicine

Fordham and Calvary Hospital are collaborating to demonstrate the value of palliative care in a complex healthcare system.

Months into her battle with Alzheimer’s, Jessica Morales’ mom developed aspiration pneumonia—the most common cause of death for Alzheimer’s patients. Breathing problems and infections led to frequent and frustrating trips to the emergency room. Morales knew her mother was dying. But she also knew she needed more extensive care than could be provided at home. So she brought her to Calvary Hospital in the Bronx, where staff treated her physical symptoms and so much more.

“I knew I needed the support to get through this time with her,” said Morales, FCRH ’97, an actress who grew up on the Lower East Side of Manhattan. ““The care there was so different from the beginning.” Hospital staff turned her mother in her bed every two hours, she said, brushed her hair the way she liked, and played her favorite Mexican music to soothe her. “It was an individualized approach.”

“You have to touch your patients. You have to hold their hands. And it’s got to mean something to you.”
Calvary provides palliative care to adult patients in the advanced stages of cancer and other life-limiting illnesses. It is the only acute-care facility of its kind in the country, long respected for its compassionate approach to caring for patients and families in their darkest hours.

“Every time we have a meeting here, everybody’s hugging,” said Michael J. Brescia, MD, FCRH ’54, Calvary’s executive medical director. It’s a side effect, he said, of the culture of the facility, where alleviating emotional and spiritual suffering is as crucial as treating the physical symptoms of disease. “You have to touch your patients. You have to hold their hands. And it’s got to mean something to you.” 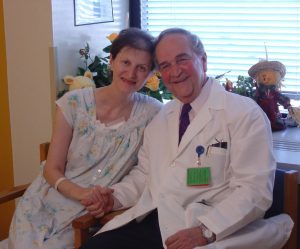 Fordham and Calvary have enjoyed a close relationship for years, forged in part by Brescia’s love for his alma mater. “Fordham gave me the gift of faith,” said Brescia, who says a silent prayer each time he enters a patient’s room. That personal connection led to a professional partnership. Fordham faculty have conducted research at Calvary, and Calvary medical staff have lectured in Fordham programs. An October 20 symposium at the University highlighted that research, fostering a discussion on the complex issues surrounding palliative care.

“The relationship with Calvary is a very meaningful one for Fordham,” she said, particularly when it comes to research. “Our faculty is working across the whole spectrum of palliative care.” In one study, Fordham psychologist Barry Rosenfeld, PhD, and Fordham psychology graduate students explored meaning-centered talk therapy with Calvary patients as a way to provide a sense of peace at the end of life. “We’re trying to understand that palliative care is both medical and social,” Morrissey said.

Insurance companies have been slow to fund palliative care, and so Morrissey and her colleagues aim to put it in the larger context of healthcare reform and value. “This is really about changing a cultural paradigm,” she said. “I think the problem is, in our Western culture, we have been very reluctant as a society to engage in any discussions about limits on care or how we’re going to allocate resources.”

Presenting the keynote at the October 20 conference was Philip Pizzo, MD, FCRH ’66, pediatric oncologist and former dean of the Stanford School of Medicine. A nationally respected policy advocate, Pizzo has helped lead major studies on palliative care and end-of-life care for the Institute of Medicine: the groundbreaking Relieving Pain in America, published in 2011, and last year’s Dying in America: Improving Quality and Honoring Individual Preferences Near the End of Life. 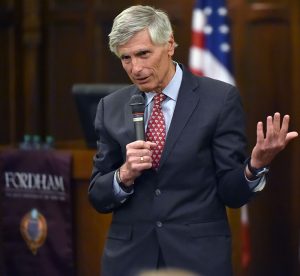 “It’s not whether to choose more or less care, but whether to honor individual preferences,” said Pizzo, a microbiology and immunology professor at Stanford and founding director of the university’s Distinguished Careers Institute. And pain, he points out, is not just an end-of-life issue. An estimated 100 million people in America suffer from chronic pain. A few years ago, he became one of them. “It became very personal,” he said of the chronic neuropathic pain he experienced after an injury. “Suddenly I was completely incapacitated, so I absolutely appreciated how it literally saps the energy and the sense of purpose from anyone.”

At Calvary, Brescia and his staff view depression and psychological pain as one of several types of suffering to focus on when caring for patients. Patients also struggle with spiritual suffering, he said, asking themselves, “Is there a supreme God that loves me and knows what I’m going through?” And Calvary staff are equally cognizant of familial suffering. Morales, who slept on a cot in her mother’s room during her stay at Calvary, received a massage through the Family Care Center, which she called “a little haven.” And when her mom died, a Calvary chaplain was there at Morales’ side.

That kind of comprehensive care is not without its costs. Calvary, a nonprofit, loses millions of dollars a year, much of it made up in fundraising. But the world-renowned physician was never in this work for the money.

Before he got involved in palliative care, Brescia achieved fame in the mid-1960s for the Brescia-Cimino fistula, a surgically created connection between veins and arteries used in hemodialysis patients. People came to the Bronx from all over to be treated for chronic kidney disease, he said, and Calvary was beginning to collect full compensation for dialysis so they could build a new facility.

“But I went to tell my father, a little Italian immigrant,” Brescia said. He explained the invention and said that centers would open around the world in a year’s time, and he’d stand to make quite a bit of money. The older man said, “A year? Why a year?” When Brescia explained that it would take time to set up the lucrative contracts, his father asked, “How many die in a year?” Brescia told him 50,000, and his father’s face dropped. “‘Give it away,’” he told his son in Italian. When Brescia protested, his father said, “‘When you shave in the morning, the faces of the children will appear in the mirror, [children]who should be with their parents. They will not be because my son, who I should be so proud of, has to have five cars, five boats, five houses.” Brescia knew his father was right. “I left his house and [we]published [the research].”

Clinicians began using the procedure and contacting Brescia for his expertise. “Doors just opened,” said Brescia, who is considered a pioneer in modern palliative care. “They wanted to hear about all the renal work. The price of that was that they had to hear about the palliative work,” which he was now doing at Calvary. He said he and his colleagues were able to get many federal laws passed “that enabled us to survive and prosper.”

But getting insurance companies to cover the cost of palliative care is still a challenge, despite the empirical evidence that it lowers hospital readmission rates, said Falguni Sen, PhD. Sen directs the Global Healthcare Innovation Management Center at Fordham, which presented the October 20 panel discussion in conjunction with the Fordham Science Council.

“Palliative care, in my opinion, has been the first group that has really tried to look at healthcare in an integrated way,” he said, noting that the Affordable Care Act has given providers some options through which they can include palliative care. He cited new accountable care organizations that accept a total fee for the care and well-being of Medicare patients rather than a traditional fee-for-service arrangement.

Sen said his center, part of the Gabelli School of Business, aims to build on Fordham’s collaborations with Calvary Hospital to explore programs based on these new provisions. He hopes to expand the University’s certificate program in palliative care—which includes Calvary medical staff as instructors—to offer “more skill-based” programs. The University’s Graduate School of Social Service also offers an increasingly popular palliative care program, which has MSW students completing fieldwork at Calvary. And Sen anticipates Fordham faculty from several disciplines wanting to make a difference in the way care is delivered.

“We’ve got to move out of the purely medical care model on palliative care.”
“People in the public policy area, both in business and in political science, who are constantly engaged with this issue of ‘graying America’ and the importance of things like palliative care will want to make an impact,” he said, which will be critical as the U.S. elderly population is expected to have doubled from 2000 to 2030.

“We’ve got to move out of the purely medical care model on palliative care. It’s not just a question of managing pain through medication,” he said. “Pain is something that is so complicated … and it requires care and consideration on so many levels.”

Listen to Dr. Pizzo discuss palliative care and his work at the Distinguished Careers Institute on WFUV’s Fordham Conversations.