skip to main content
Return to Fordham University
You are at:Home»Fordham Magazine»Alumni News»How to Be a Working Artist: Theatre Alumni Offer Graduating Seniors Advice on Making It in a World of Auditions, Agents, and Anxiety
Above: Jared McNeill, FCLC ’08, talks to current theatre program seniors. Photo by Bruce Gilbert

Jared McNeill, FCLC ’08, knows how important it is for actors to maintain their passion for theater. “A lot of people talk about it as a flame burning in your heart. I always think it’s not a big fire; it’s a tiny candlelight. And there’s a lot of wind out there! You’ve got to know where it’s coming from.”

McNeill started out working small jobs in the New York theater scene. He said the collaborative nature of Fordham’s program, where performance-track students are required to learn design and production skills (and vice versa), helped him get noticed. Now he’s touring the world with Tony- and Emmy award-winning director Peter Brook’s company and spending much of his time in Paris. It’s a path his agent recommended against.

“They’re there to assist you on your road,” McNeill said of his experience with agents, “but they’re not there to tell you how to live your life or do your career.” It was actually Matthew Maguire, director of the Fordham Theatre program, who helped McNeill think through the decision that has ultimately shaped his career.

Are you an agent, manager, or other industry professional? Find out more about Fordham’s Senior Performance Showcase on May 9 and 10, and reserve your seat.
McNeill and four other successful alumni returned to campus on April 4 to give graduating seniors personal perspectives and career advice before their Senior Showcase, two days of performances and receptions where students can network with industry professionals.

The panelists, whose conversation was driven entirely by student questions, gave advice about graduate school, discussed working in theater versus television, and shared honest and sometimes-humorous stories about the audition process and the difficulties women and minorities often face in the industry. 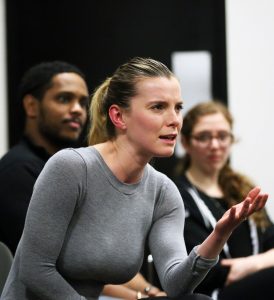 Betty Gilpin, FCLC ’08, tells seniors about some of her most memorable auditions. Photo by Bruce Gilbert

Betty Gilpin, FCLC ’08, an actress who had a recurring role on Nurse Jackie with Edie Falco and will soon be seen on CBS’s Elementary, told students how her days at Fordham motivate her even when things get tough. “Especially as a woman, it’s totally different. You’re going to be told things like, ‘Don’t make that weird face when you cry,’ or, ‘Great, just wear more makeup next time,’” she said. “But the Fordham is in you, and that’s important.”

“What you’ve built here is invaluable,” Gilpin said, referring to the theatrical training she received and the bonds she formed at Fordham. “You’ve built this ocean of weird to draw on, to love from, that not everybody has.”

Amirah Vann, FCLC ’02, who also started her career acting in small shows on stage in New York City before landing the part of Ernestine on Underground, WGN America’s new show about the Underground Railroad, stressed that it’s important to “take the work when it comes” and “build relationships,” but to also create your own path. “The clearer your vision of what kind of actor you want to be, what things are important to you, the more [your agent and casting directors] will be on board,” she said. 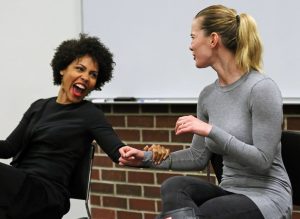 Amirah Vann, FCLC ’02, and Betty Gilpin, FCLC ’08, laugh about their similar experiences trying out for roles as female actors. Photo by Bruce Gilbert

She also advised students to be assertive on auditions, and to remember that the casting directors don’t always know what they’re looking for. When you’re given a part to read for, she explained, “you’re not trying to solve some problem you’re presented. You know this character. You come in with choices and opinions.”

It’s a little different for Isabelle Simone, FCLC ’12, who has worked as a costume assistant, often with renowned and prolific designer Ann Roth, on Broadway shows like Porgy and Bess, Book of Mormon, and On Your Feet. “I’m creating someone else’s vision,” explained Simone, who emphasized the social nature of the theater business.

“Every job I’ve gotten has been a direct result of the first internship I got from Becky [Bodurtha, the Fordham costume shop supervisor],” she said. It’s just as much about being easy to work with as it is about being talented. “If you’re good, the word gets out. Much of it is about being nice and being a good person.” 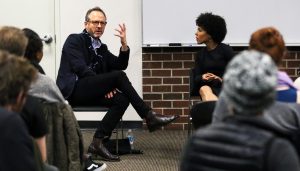 John Benjamin Hickey, FCLC ’85, who won a Tony Award for his role in The Normal Heart and an Emmy nomination for his starring role on Showtime’s The Big C, agreed. “That behavior does not go unrewarded,” he said.

Hickey also urged seniors not to be discouraged if they don’t get an agent through the Senior Showcase.

“It certainly won’t be the last time somebody says no,” he said. “It’s just the very beginning of your career. Keep trying to learn. Every hard thing teaches you. You just have to keep trying to figure out new ways to keep at it.”

The Senior Showcase is open only to industry professionals, such as agents and managers. But you don’t have to be an industry pro to enjoy this year’s senior class reel below!