skip to main content
Return to Fordham University
You are at:Home»Fordham Magazine»Features»Healing Ebola 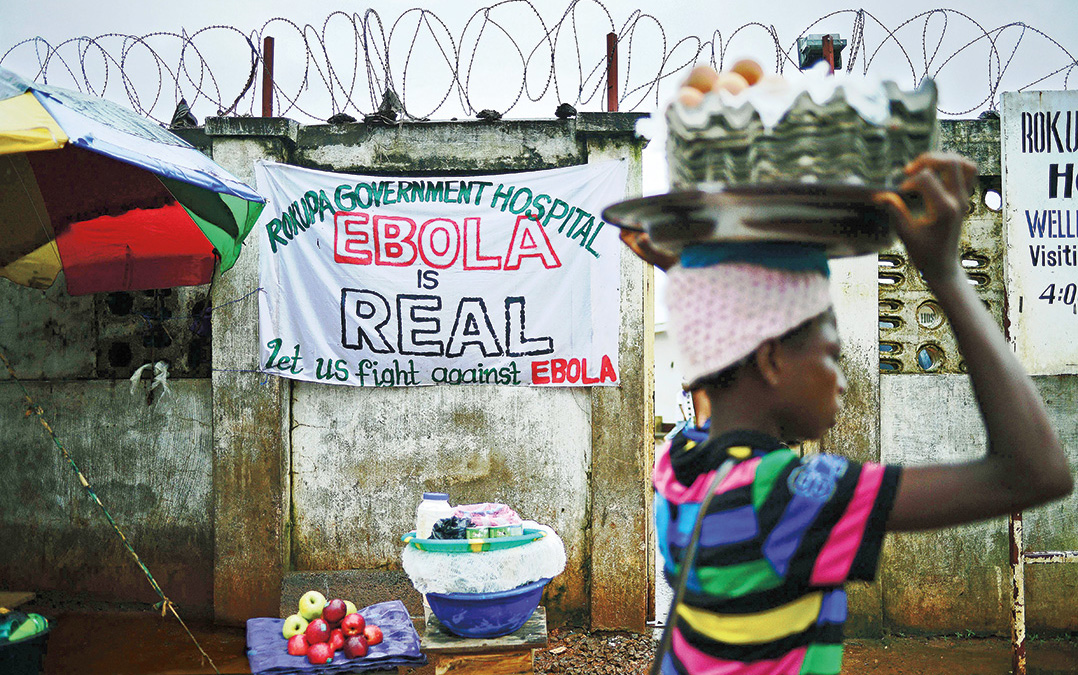 A woman walks past an Ebola warning sign outside a government hospital in Freetown, Sierra Leone, in August 2014. Carl De Souza/AFP/Getty Images

What happens when a global health crisis leaves the Western media spotlight? 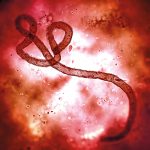 The Ebola virus, as seen under a microscope

As he watched a patient he’d grown close to die at one of Mother Teresa’s homes for the terminally ill in Kolkata, Joseph Woodring, DO, FCRH ’98, felt overwhelmed by his inability to help the man—and he had an epiphany. “I’d been holding his hand, watching his chest rise and fall,” said Woodring, who first visited India in 1995 as an undergraduate in Fordham’s Global Outreach program. On that trip, he learned to connect with suffering and honor the human dignity of sick and impoverished people. But now, a few years out of college, he wanted to examine the bigger picture. “If I don’t get upstream and learn what these guys have,” he thought, “I’m not fixing anything. I want to be able to actually treat people.”

Last year, during the Ebola outbreak in West Africa, Woodring deployed to Liberia as an epidemiologist for the Centers for Disease Control and Prevention. His job was to trace the spread of the virus and work with local people to arrest the contagion. By showing respect for the dignity and self-determination of people in the villages, he said, he was able to convince communities to adopt practices that stopped the spread of Ebola.

That kind of community-minded approach is still needed to fuel social and economic recovery in the Ebola zone and prepare for the next disaster, said Ellie Frazier, GSAS ’15. A recent graduate of Fordham’s master’s degree program in international political economy and development, Frazier was in Sierra Leone in June 2014, studying the role paralegals play in knitting the nation back together after its civil war, when Ebola emerged as a major problem.

Now back in New York, Frazier, an adjunct instructor at Fordham’s Institute of International Humanitarian Affairs, stresses that recovering from the outbreak will require sustained international attention and sincere collaboration with affected communities. Emergency Ebola treatment centers are being turned into permanent clinics. That’s good, Frazier said, but villages will also have to reintegrate stigmatized Ebola survivors, negotiate what to do with the land of families wiped out by Ebola, find a way to care for and pay school fees for orphaned children, and address other consequences not yet identified.

“The immediate emergency seems to have subsided, but now what? The tendency with media and some humanitarians is OK, done. But for there to be full-on economic recovery, it is going to take a lot of time,” she said, and “it needs to be bottom up.”

“The next pandemic is prevented by building a world where people are given the opportunity to get educated and thrive.”
The first case of the most recent Ebola outbreak was reported in March 2014 in Guinea. By August, the United Nations Health Agency had labeled the outbreak an international public health emergency, as the disease galloped across Liberia, Sierra Leone, and Guinea, swallowing thousands of victims and decimating those nations’ small and dedicated cadre of medical professionals.

More than 11,000 people died. For eight months, the response was left to just two international charities: Doctors Without Borders and Samaritan’s Purse. While they did heroic frontline medical work, they and later arrivals were ill-equipped to halt the spread of the disease. They had a hard time convincing people to stop kissing or shaking hands, and to suspend traditional burial practices that involve washing and caressing the body—expressions of deeply held spiritual beliefs but also certain methods for communicating the disease.

Medical response teams full of foreigners wrapped in bright yellow plastic suits with shields over their faces arrived on trucks in remote villages to remove the bodies of the dead. They were met with resistance and fear. People hid their sick relatives and buried the dead secretly, allowing the disease to blossom. 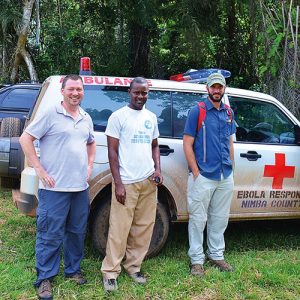 When he arrived in Liberia in October, Woodring realized a different approach would be necessary. He focused on communicating with people who could effect change. “It’s the village elders that made the impact,” he said, by enforcing quarantines and maintaining the 21-day observation of anyone directly exposed to the disease. “The village elders were at the apex of those societies, and [people]were roaring in and stripping them of their traditional role. We had to go to the elders and work with them. You’d inform traditional healers and give them due deference and tell them, look, this practice is very dangerous.”

Collaborating with local social systems is key, experts say, both for effective containment of diseases and to lay the groundwork for recovery. Thousands of foreign nurses, doctors, and aid workers, among them several Fordham alumni and staff, aided their West African counterparts during the Ebola outbreak. A year later, the disease is nearly abated, and Western media, which fueled hysteria and panic in the United States during the outbreak, has shifted to other crises. But the affected countries are still struggling to recover, and humanitarian experts are studying the Ebola outbreak to learn how the world can respond sooner and better—and even prevent the next disaster.

The solutions are straightforward but terribly difficult to achieve, according to Alexander van Tulleken, MD, senior fellow at Fordham’s Institute of International Humanitarian Affairs. “The next pandemic is prevented by building a world where people are given the opportunity to get educated and thrive,” he said. It might sound trite, but he’s serious. A strong healthcare system, access to education, and a stable civil society are what ultimately protect against disease.

The reason Ebola was so deadly and persistent in Liberia, Sierra Leone, and Guinea, while cases elsewhere were more quickly contained, has everything to do with the destabilizing effects of war and extreme poverty. “Diseases are opportunists,” Van Tulleken said. “They only thrive in certain climates. Like criminals and terrorists, they look for places where rule of law is broken down.”

With national infrastructure—not just roads but electrical systems, healthcare, communication, and trust in government—broken apart by years of armed conflict and underinvestment, fighting Ebola was especially difficult, said Melissa Labonte, PhD, an associate professor of political science at Fordham, who has studied the region extensively. She said doctors focused on a medical and technical response, but social wounds allowed Ebola to fester, so a social response was also needed to beat it back.

“You can’t go in and just do things. The imperative is to respond, I know, but you have to know what you are doing before you start acting,” Labonte said. “Local knowledge matters. It was undervalued. Once we started to listen to it and value it, things changed for the better.” 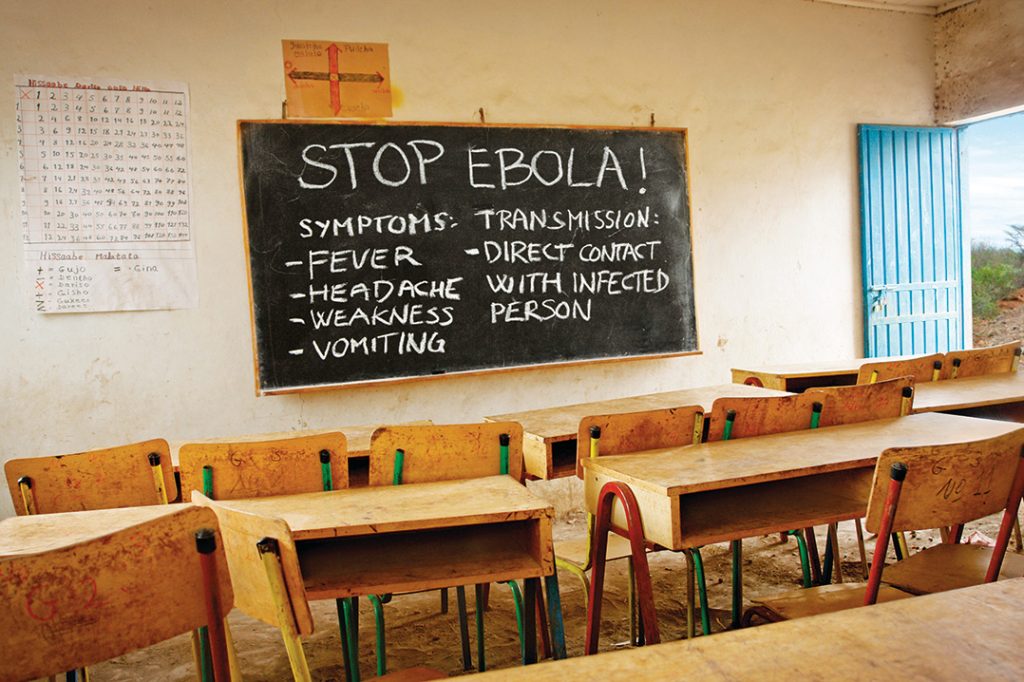 Health and humanitarian experts say collaborating with local social systems is key to halting the spread of the Ebola virus.

Because the virus is strongest at and even after death, people who care for the sick and prepare the deceased for burial are at highest risk for contracting the disease. One sick person could infect dozens of others, as Woodring learned when he traced the root of 65 cases in one rural county to a man who had cared for his Ebola-stricken brother in Monrovia. That man returned home, got sick, and went to a bare-bones clinic. A grandmother from another village cared for him, wiping up vomit and comforting the man as he died overnight. The grandmother returned home and grew ill. Because she was a central and beloved figure in her community, dozens of people attended her funeral, caressing her body, kissing her—and contracting Ebola. Forty-seven of the infected people died, a 72 percent fatality rate.

“Honestly, all our efforts were for naught if we couldn’t control the burial system,” Woodring said. “Even though there is a huge science to Ebola, if you didn’t get people’s respect from the beginning—by offering it—you were just another white guy coming in telling them what to do.” He hopes national governments can harness the training and funding that followed the Ebola crisis to build sustained healthcare systems in the affected countries.

It’s an approach Elin Gursky, GSAS ’13, considers essential. In April, when United Nations Secretary General Ban-Ki Moon named a high-level panel to study the global response to health crises and present a report by the end of the year, Gursky was appointed to the resource group of experts supporting the panel. Broad and deep international cooperation and political will to invest more money in strong public health systems are what’s needed to prevent and counter future disease outbreaks, she said.

“You can bring in experts and surge capacities, but it needs to support, not supplant, local systems,” Gursky said. “It needs to start at the community level.”

When Laura Sida, a pediatric cancer nurse and a graduate student in Fordham’s master’s degree program in humanitarian affairs, arrived in Sierra Leone last spring, she thought she’d be part of a treatment clinic. But the work quickly shifted to disaster recovery. After six months spent helping ministry of health workers improve clinic management and supervising psychological and social support teams for Ebola survivors, Sida said recovering after the disaster is just as crucial for long-term health as responding to the crisis itself. She’s found her master’s thesis topic: the challenges of rebuilding after a disaster.

A particular difficulty in the aftermath of Ebola is that the disease attacks precisely the people who might be relied on to lead a social recovery, she said. “It kills the caretakers, the people who are the most caring and compassionate. So who is left? Ebola clears the household.”

How the countries build back, from the most immediate relationships in villages to the strength of national health systems—and what the international community learns from Ebola—will determine how the next global health crisis plays out. The world isn’t getting any less connected, as the few Ebola cases that emerged in the United States show, and there will inevitably be a next time, Van Tulleken said. “We need to understand that my life and the life of the poorest person in Africa are intimately linked.”

—Eileen Markey, FCRH ’98, is the author of a biography of Maura Clarke, one of the U.S. nuns killed in El Salvador in 1980, to be published next year by Nation Books.