skip to main content
Return to Fordham University
You are at:Home»Fordham Magazine»Harvesting Grapes on the North Fork with Gabriella Macari
Fordham alumna Gabriella Macari at her family-run vineyard on the North Fork of Long Island during the 2016 harvest. Photos by Caroline Rocchetta
Gabriella Macari’s love of wine runs as deep as her family’s New York roots—a legacy that dates back to the 1930s, when her grandfather crushed grapes with his father in the basement of their Corona, Queens, home. Three decades later, Joseph Macari Sr. purchased a former potato farm on the East End of Long Island with the dream of one day transforming it into a vineyard bearing his family’s name.

“To my grandfather, it has always been family first,” says Gabriella Macari, GABELLI ’09, “and it still is.”

A certified sommelier, Macari spent her childhood riding horses and tractors on the farm after her parents left Queens for Mattituck to plant vines and breathe life back into the 500 fallow acres perched above the Long Island Sound.

Thanks to the family’s dedication and an ecological and holistic approach to growing grapes, Macari Vineyards is thriving today.

“My father created a composting program and we have our own herd of longhorn cattle,” Macari explains, adding that the farm is also home to horses, ducks, pigs, chickens, and one peacock. This biodiversity ensures rich soil in which healthy fruit has grown abundantly and yielded bountiful harvests every year since the mid-1990s—with only one exception: In 2009, the results fell short of the family’s expectations.

That August, the family received a visit from Joseph M. McShane, S.J., president of Fordham.

“Father McShane came out and blessed our vineyards,” Macari recalls, “and wouldn’t you know, the following year we had the most spectacular harvest ever.” 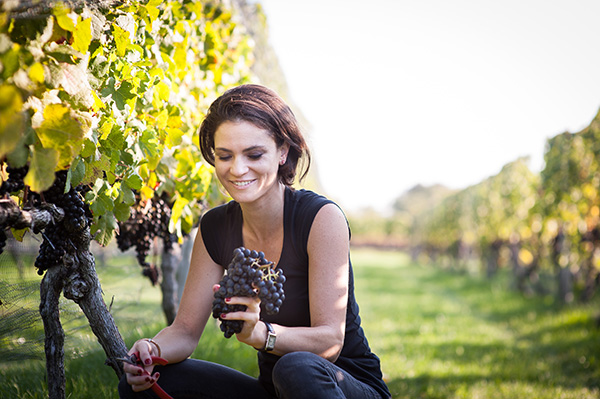 To carry out his father’s vision of establishing a successful family winery, Joseph Macari Jr. (Gabriella’s dad) studied biodynamic viticulture with the late Alan York from California and Alvaro Espinoza of Chile. Now, he and his wife, Alexandra, along with Gabriella and her younger brothers—Joseph, Thomas, and Edward—operate the business together full time.

Gabriella heads up the vineyard’s marketing and distribution efforts, promotes the Macari brand, assists in the cellar, and hosts tours and tastings for corporate groups.

Recognizing that her industry is vast and ever changing, she continues to expand her education. In September, she was accepted into the Institute of Masters of Wine study program, a highly selective and rigorous program that accepted only 88 candidates this year and inducted just 13 new Masters of Wine. The “MW” distinction, held by 354 professionals across 28 countries, recognizes individuals with the highest knowledge and ability in the art, science, and business of wine, equipping them to excel in all disciplines, from winemaking to viticulture to retailing.

Macari completed the Wine Executive Program at the UC Davis Graduate School of Management in 2013 and earned a Level 4 Diploma in Wine and Spirits—a prestigious recognition from the Wine & Spirit Education Trust. She also interned abroad in the Champagne and Bordeaux regions of France, where she learned about production and expanded her international network. As an independent consultant, she has lent her expertise to well-known vintners, such as Ribera del Duero, Wines from Spain, and Moët Hennessy.

Broadening Macari Vineyards’ distribution nationwide and sharing her knowledge and love of wine with others are among Macari’s goals.

“I want to help make learning about wine more approachable and less intimidating,” Macari says. She is also pleased that consumers are embracing wines made locally and domestically.

“As long as the quality remains high and producers keep pushing forward, local and domestic wines will be finding more homes on retail shelves and wine lists,” she says.

This trend is noteworthy in a market that for years been dominated by imports. And it’s especially promising for the future of a Long Island vineyard that began with one man’s vision and a family tradition now in its third generation.