skip to main content
Return to Fordham University
You are at:Home»Fordham Magazine»Halloween, 1970s Style: Plastic Costumes and Street Scenes from a Bygone Brooklyn
Photos by Larry Racioppo
New York City photographer Larry Racioppo, FCRH ’72, honed his art and craft during the 1970s by taking pictures of family, friends, and kids in his working-class South Brooklyn neighborhood.

“I did it because I liked the feel of it,” he says. “There was something about having a camera that made me think, made me feel more alert and more aware of my environment.”

As a kid, he’d go trick-or-treating with cousins and friends, and they’d have make-believe fights with shaving cream and “chalk bags”—old socks filled with pieces of chalk crushed to dust. By nightfall, they’d head indoors to bob for apples, carve jack-o’-lanterns, and enjoy the sweet loot they’d foraged from friendly neighbors. “I loved the activity, the crazy costumes, the theatricality of it,” he says.

By the mid-’70s, he was in his 20s, a recent Fordham graduate working at a high-end Manhattan photo studio. He’d long since stopped trick-or-treating, but the spirit of the holiday still called to him.

“I started leaving work early on Halloween to get back to Brooklyn. I photographed kids from 3 o’clock, when they got out of school, until it got too dark to shoot with available light,” he says, noting that he’d start near Park Slope and wander south to Sunset Park. “That first year, I came out of my house and the kids charged me—they ran up to me full speed for me to take their picture.” 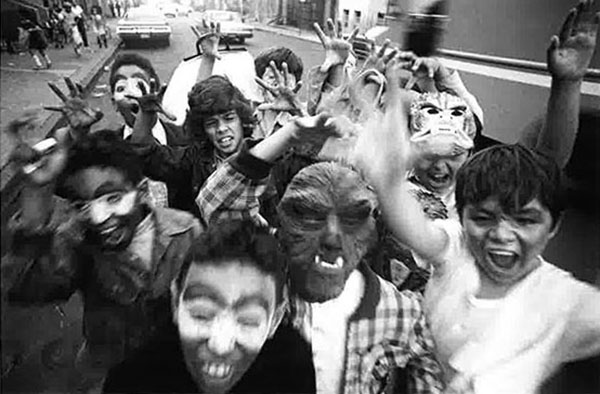 “It became a yearly thing,” he says, “so from ’74 to ’78, I had all these fabulous photographs. And the kids and costumes were terrific. There’s the classics—the ghosts, vampires, angels. And every year there’s a movie that’s the big movie. One year it’s Planet of the Apes, then it’s Jaws, then Star Wars, and sometimes those cultural costumes would linger a year or two. But they have a shelf life—I mean, when you look back and see the Fonz costumes. These days, who even knows who the Fonz was?” 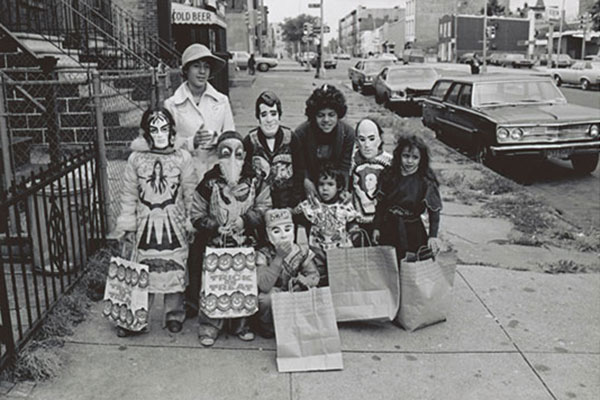 Group of trick-or-treaters, including “The Fonz” (back row, center) 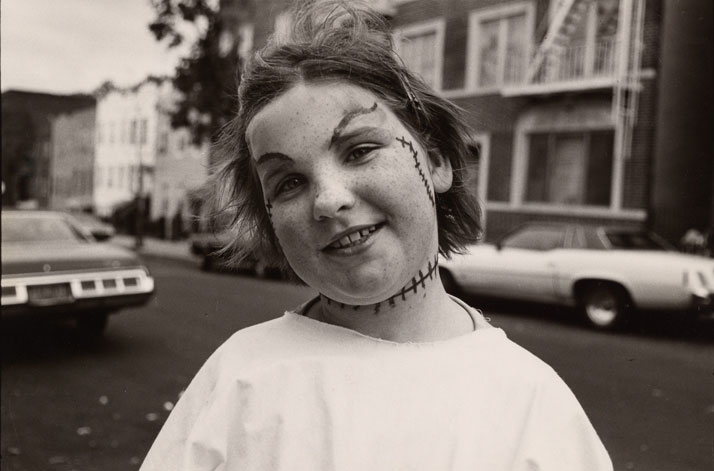 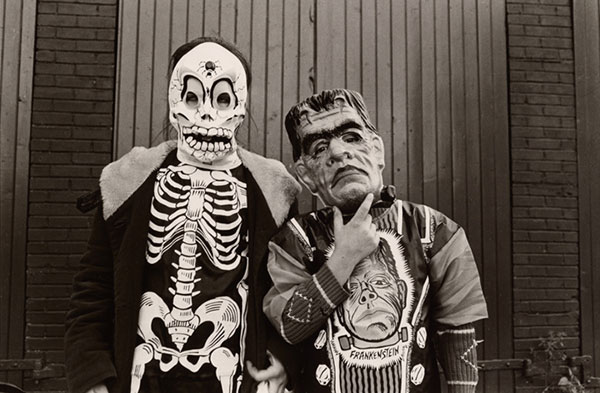 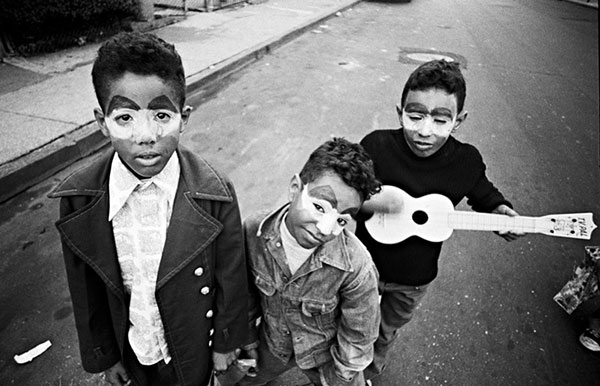 Three Boys with Tear Makeup: “These are some of the kids who bum-rushed me when I came out of my house—the guitar is pointing to my house,” Racioppo says. “They have this interesting face painting, and the boy on the left has a tear. I thought it was so moving, and I find it very Brooklyn streets—how you can have very little money and still have fun and do things.” 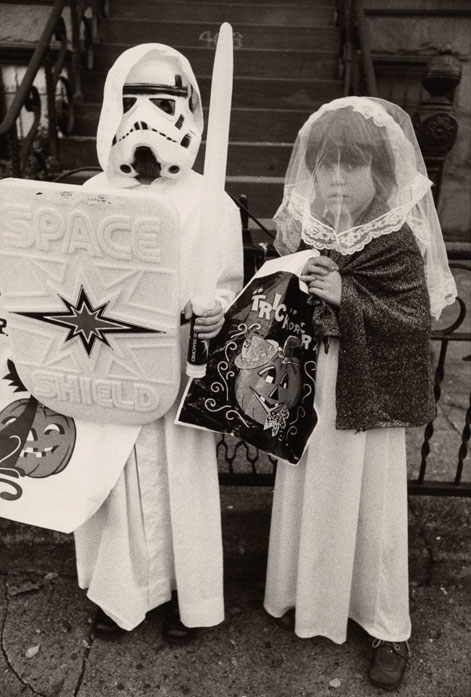 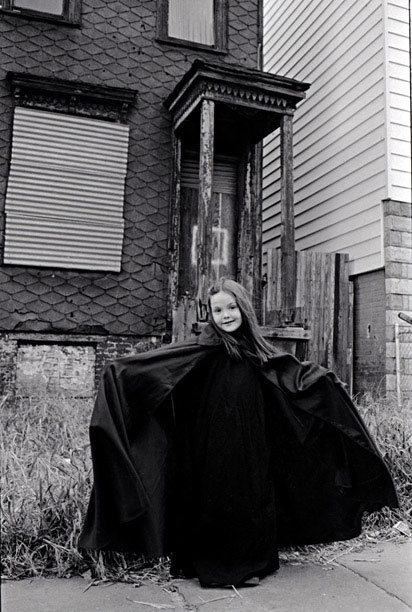 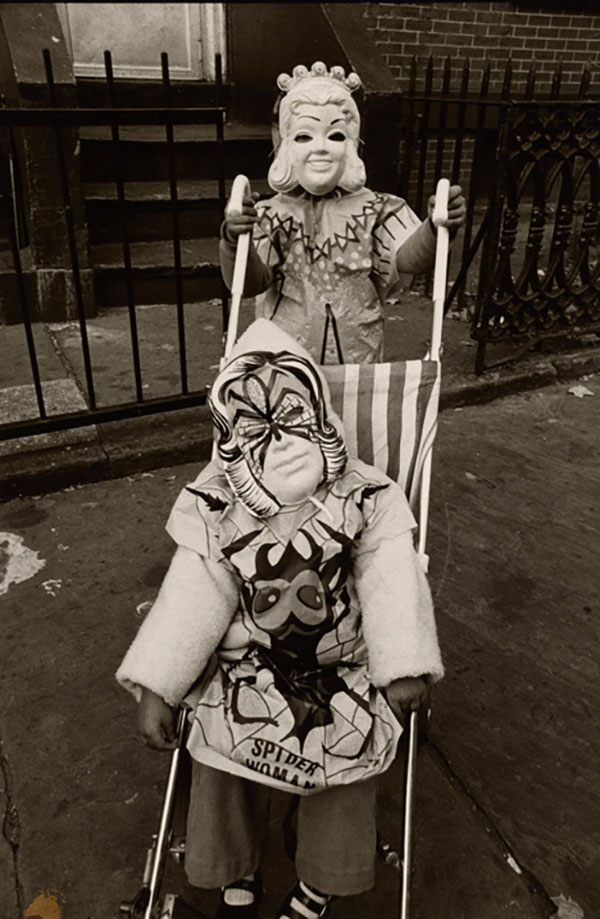 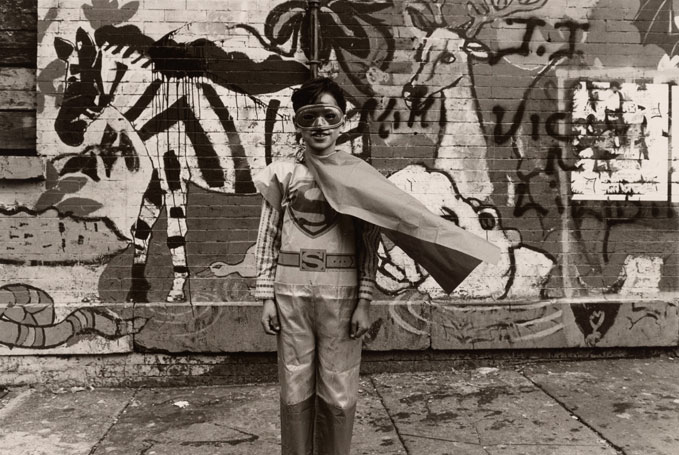 Superman: “I was photographing three or four kids, and I knelt down to photograph the Superman,” Racioppo recalls. “The cape blew up for that one frame, and it makes the picture.” 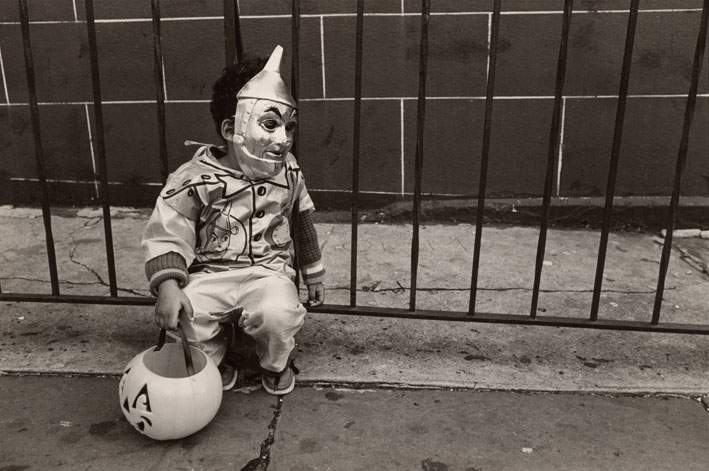 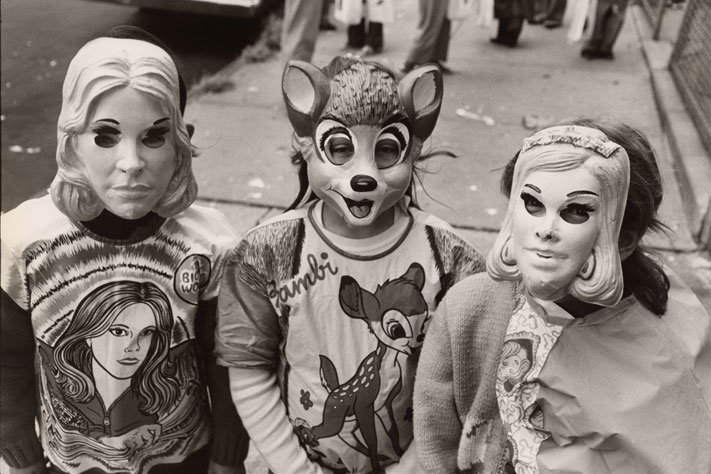 The Bionic Woman, Bambi, and Cinderella 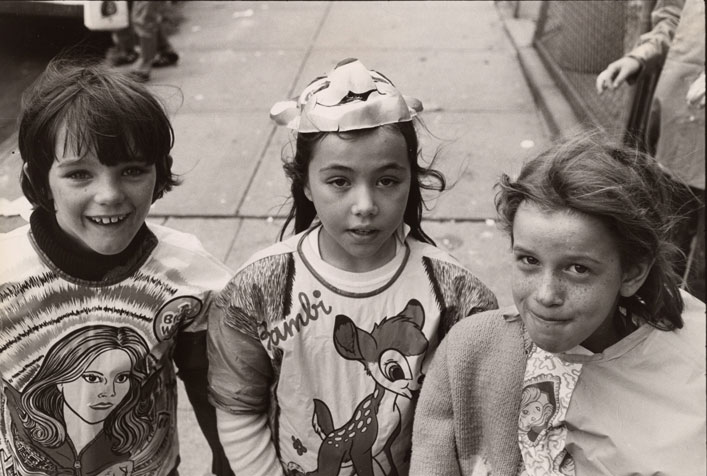 The Bionic Woman, Bambi, and Cinderella (masks off) 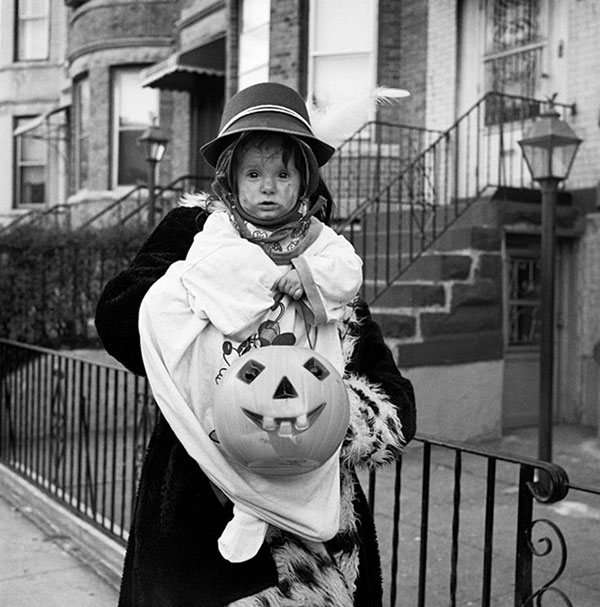 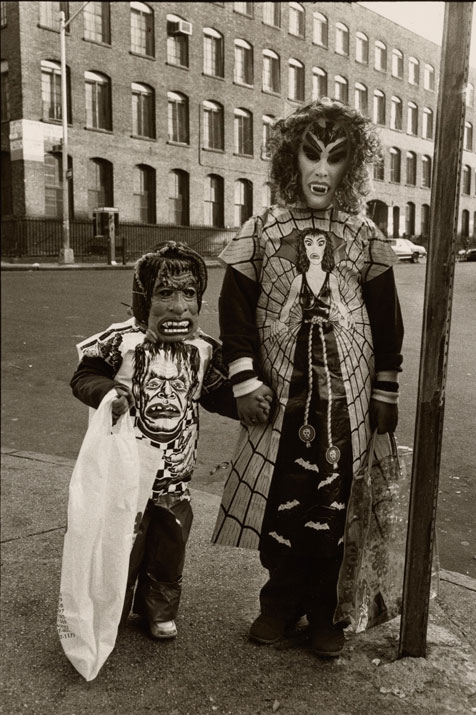 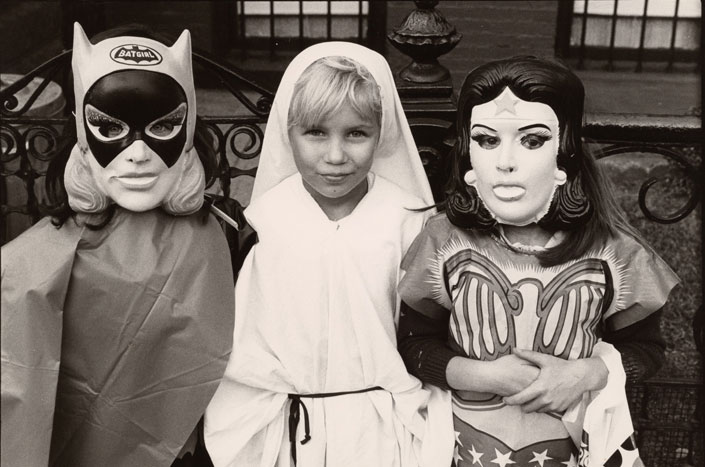 Batgirl, St. Ann, and Wonder Woman: “This is one of my favorites,” Racioppo says. “The next year, I saw the girl who was St. Ann, and she was wearing makeup and a jeans jacket, and I said, ‘Weren’t you St. Ann last year?’ She went, ‘Oh, please!’ She was annoyed that I remembered that she was St. Ann. You go from 12 to 13, and the world is very different.” 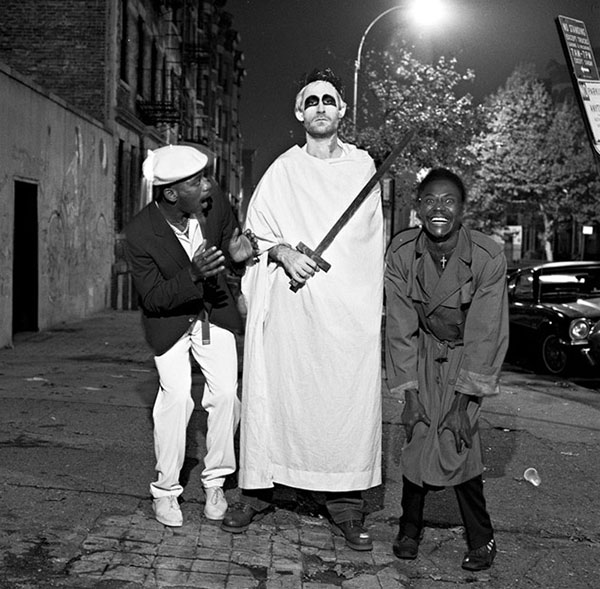 Hamlet’s Father and Passersby, Park Slope, Brooklyn: “This one is from 1982 outside the Park Slope Food Coop. They were having a Halloween party, and I belonged to the co-op, so I thought it would be fun to go. This guy comes out in costume, and I said, ‘Who are you?’ And in a huffy tone of voice, he goes, ‘I’m Hamlet’s father.’ I took one picture, and in the second one, these guys come up the street and they pose with him. And it’s that frisson that I love, that interaction when you’re on the street and you don’t know what’s gonna happen.” 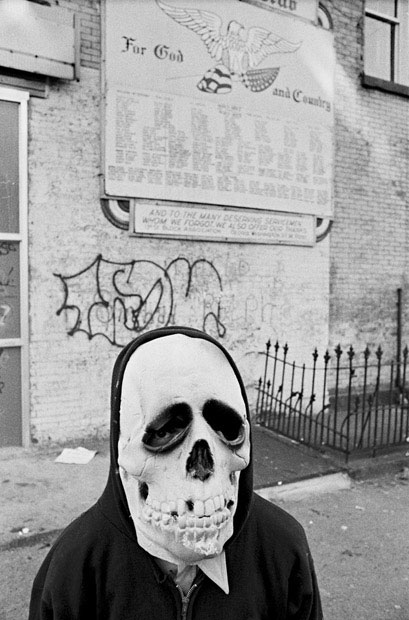 The Skull: “Behind this kid wearing a skull mask is a Navy memorial to people who died during World War II—it says ‘For God and Country.’ That to me is a really emotional picture,” Racioppo says. “While I was doing this, someone covered my back with shaving cream—a ghost, one of the skull’s friends. When I got home, my girlfriend said, ‘What’s this?’ I took off my coat and said, ‘They got me!’ But I thought it was hysterical. It made me feel like, oh man, I’m 12 years old again, they got me with shaving cream!”

Ever since 1974, Racioppo says he’s had an easy rapport with the neighborhood kids, who took to calling him “Picture Man,” a nickname he says he took as a great compliment.

“That was really my first notch up,” he says, noting that it helped launch his decades-long career in photography. From the late 1980s until 2011, he was a staff photographer for the city’s Department of Housing Preservation and Development, and he has earned several grants, including a Guggenheim Fellowship, for his own work documenting the urban landscape.

“Part of what I do is about stuff disappearing,” he once told The New York Times. That’s an explicit theme of his latest book, Brooklyn Before: Photographs, 1971–1983, published last month by Cornell University Press.

The book highlights working-class families—most of them Italian American, Irish American, and Puerto Rican—as they go about their daily lives, celebrating Catholic sacraments and holidays, playing stickball and congas on the sidewalk, hanging out on stoops and fire escapes, posing with boom boxes in front of graffiti-tagged walls, and taking part in patriotic parades and religious processions.

“I did not know it at the time, but I was recording a part of Brooklyn that would soon be remade by gentrification,” Racioppo writes in the book’s preface. “Slowly but surely, the residential ‘gold rush’ expanded south from Park Slope … toward Green-Wood Cemetery,” driving up rents and home prices, and driving out many working-class families.

Brooklyn Before features a handful of the Halloween photos that helped launch Racioppo’s career. Today, he lives in the Rockaways, where he has continued photographing trick-or-treaters on Halloween. This year, however, he says he may head back to Brooklyn to meet up with his grandsons in Park Slope, where, although the times have changed, the spirit of the holiday is still strong.

“They’re 8 and 6 years old now. They won’t just get a chalk bag and run around till dark by themselves. They’ll go to supervised play or an after-school Halloween celebration,” he says, like the annual children’s parade. “Halloween is always fun. There are so many great things about it.”