Sarwar, who was born in Pakistan, came to Astoria with his family when he was in eighth grade. By the time he finished high school, he had earned a JPMorgan Chase SmartStart Scholarship, which covers four years of college tuition and provides recipients with a paid four-year rotational internship at the company.

“My personal passion is education,” says Sarwar, who earned a B.S. in finance from Fordham’s Gabelli School of Business in 2014. “It’s a guiding force for me. That’s the reason why my father and my family made a lot of sacrifices, so my siblings and I could come here to get an education that would help us and help other people.” 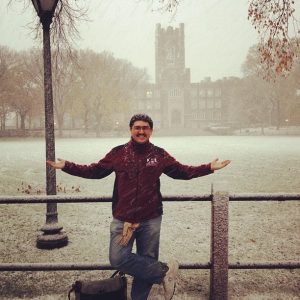 Sarwar poses in front of Keating his junior year. “The minute I saw Keating,” he says, “I knew I had found my Hogwarts.”

He says the internship combined with his Gabelli education prepared him for a successful career that gives him the capacity to support the people and causes he cares about. He’s now an associate on the investment risk team at JPMorgan Chase.

Sarwar hopes to spread his dedication to education in his role as a board member of Fordham’s Young Alumni Committee and chair of the Philanthropy Subcommittee.

“I want to help expand access to Fordham,” he says, “because I believe in a Fordham education. I believe in its ability to transform lives because I experienced that.”

Sarwar is particularly excited for this year’s Fordham Giving Day, a 24-hour push of support for the University from noon on March 6 to noon on March 7. “It’s a united platform for everybody to cheer and come together, and it helps people remember their Fordham experience and expand that experience to others,” he says. “I encourage young alumni to give whatever they can, to remember their ties to Fordham and the value of their own education.”

Besides his work on Young Alumni Committee, Sarwar also informally advises Fordham’s Model U.N. Club as well as the Muslim Student Association, a club he helped reinvigorate when he served as president in his first two years at Fordham. “I also still read The Ram almost every week,” Sarwar says.

Sarwar plans to continue his involvement with Fordham and is looking forward to seeing it “continue to grow in the next decades as a source of not only academic and professional leadership but moral leadership,” he says.

“I think our world needs people who are smart, but we also need people who can act and think morally. And that is at the core of Fordham as a University.”

What are you most passionate about?
I am passionate about helping spread access to education. I believe it’s the key to a happy, prosperous, and welcoming society. My family and I have been blessed with the opportunity to climb the socioeconomic ladder due to the high quality education we have been lucky to receive, and I dream of a world where that opportunity is available to all.

What’s the best piece of advice you’ve ever received?
Just before I left, one of my teachers in Pakistan asked me to always remember who I am and where I come from. Immigrants everywhere become de-facto ambassadors of their heritage, and he said to be mindful of that. His advice has helped me be a contributing member of the New York City community while retaining my identity.

What’s your favorite place in New York City? In the world?
Despite being a New Yorker for half my life, I am still exploring this ever-changing city. So far, my favorite places have been the lakes and secluded wooded areas in Central Park which give the illusion of being far from the hustle and bustle of the city. In the world, my favorite place is the home I grew up in in Pakistan because of all the memories there that I continue to carry in my heart.

Name a book that has had a lasting influence on you.
I received The Alchemist by Paulo Coelho as a high school graduation gift from Maurya Couvares, one of my mentors; it’s been a source of inspiration since then. The quest to find one’s true self is daunting, but Coelho’s allegorical tale serves as a constant reminder to keep pursuing it. The book was the perfect prelude to a Fordham education, as the tenets we were taught complemented Coelho’s message.

Who is the Fordham grad or professor you admire most?
I was fortunate to meet Father Patrick Ryan during my first month at Fordham when I was hanging signs around Eddies for a Muslim Students Association event. He became an instant mentor to me and also advised the growing club. His guidance was instrumental in helping MSA go from an almost defunct club to being awarded Club of the Year. I have been in awe of his vast knowledge and understanding of Islam. His biannual McGinley Chair Lectures bring together viewpoints from the three monotheistic religions and are the perfect embodiment of Jesuit values.