skip to main content
Return to Fordham University
You are at:Home»Fordham Magazine»Features»Gentlemen and Scholars
Above: Alumni talk with student-athletes at the Fordham Gents mentoring event (photos by Bruce Gilbert)

When Garrick Mayweather Jr. was invited to the first-ever gathering of Fordham Gents—a group of prominent black alumni mentoring black male student-athletes—he was excited by the idea.

Mayweather’s high school in Baton Rouge, Louisiana, was 90 percent black, he says, and seeing fewer black faces on Fordham’s campus was something he had to adjust to. So walking into a mentoring event just for young black men was “a very good feeling,” says the pre-med senior at Fordham College at Rose Hill. “It’s good to see something you’re a little more comfortable with, and to see notable alumni coming back to help you.”

An offensive lineman who came to Fordham on a full-tuition football scholarship, Mayweather says he already knew a few of the alumni at the Feb. 8 event from their involvement with athletics. Some of them had been athletes themselves.

Fordham Trustee Darryl Brown talked about what his life looked like after his star turn on the Fordham men’s basketball team.

By most accounts, Brown was an exceptional athlete. The Celtics drafted him after he graduated from Fordham College at Rose Hill in 1975. But things took a turn in Boston.

“I got smacked,” he said of the pro league. “I realized maybe this isn’t for me and thought, ‘I’m not going to keep knocking my head against the door.’”

After two years in the NBA, Brown was offered a coaching position at Fordham and a chance to continue his education. He came back and graduated with a master’s in communications from the Graduate School of Arts and Sciences in 1981. He went on to a 30-year career at ABC and retired eight years ago. Brown offered his story not as a cautionary tale, but simply as one experience among many.

Mayweather could relate; he will take his own shot at the pros when he enters the draft this spring. But if and when his days on the gridiron come to an end, he has a pretty impressive fallback career plan: orthopedic surgery. A high school hospital internship and his experience as an athlete helped him develop an interest in the field. And for good measure, he’ll graduate with a minor in business administration. “I figured since I was at a college with a really good business school, I might as well get a business minor,” says Mayweather.

The student-athletes at the event broke into small discussion groups with seven Gents to focus on a particular topic. Focusing on diversity and inclusiveness, the students and alumni will meet four more times before the end of the year. 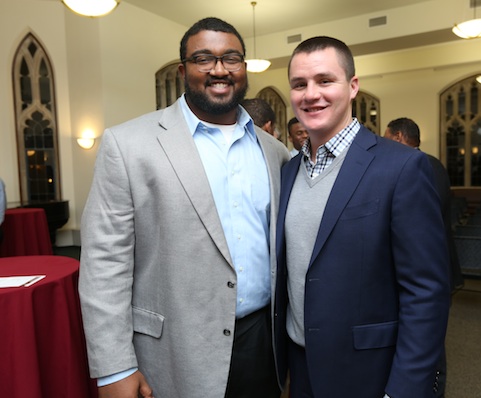 “This is a tremendous opportunity for our young people to connect with men who have walked this campus in their shoes and can provide a perspective and leadership, not just for right now, but for where they want to go forward,” said Fordham football coach Andrew Breiner.

Mayweather was in a group with Anthony Carter, FCRH ’76, former chief diversity officer at Johnson & Johnson, who also serves on Fordham’s Diversity Task Force. Carter said that the group’s primary purpose is to “instill confidence and leadership.” He was quick to let the athletes know that he and his fellow alumni consider them to be a talented and privileged group. He told the student-athletes that he hopes they will be able to reach out to other students on campus and grow the network.

“The one thing the athletes have in common with everyone else on campus is that they are students,” Carter said. “We want to ingrain in them, ‘What do I owe? What’s my payback?’” 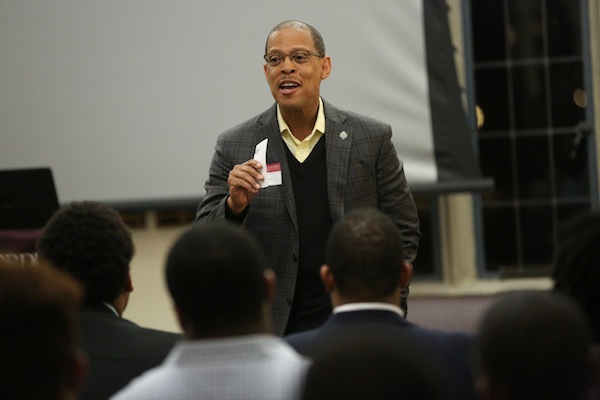 Carter referred to the “diversity crisis” at universities nationwide and said that while there’s still some way to go, he had never seen a program like Fordham Gents back in the early 1970s.

“It feels complete, but only meaning that we can bring folks together and initiate the responsibility,” he said. “It doesn’t solve the problem. That still needs to be worked through.”

Juan Carlos Matos, director of multicultural affairs, said the meeting is a first step. He added that he hopes the pilot serves as a model to eventually include other identity groups.

Mayweather exchanged contact information with Carter and plans to be in touch. “I’m pretty good as far as follow-up emails,” he says.

Though he knew all the young men at the Gents event prior to the gathering, Mayweather says he was struck by how everyone there seemed genuinely engaged—and how the evening gave them an opportunity to see each other in a different light.

“It was nice to be together, to see a side of the guys you never saw before: a more professional side, with everyone dressed up in their best.”